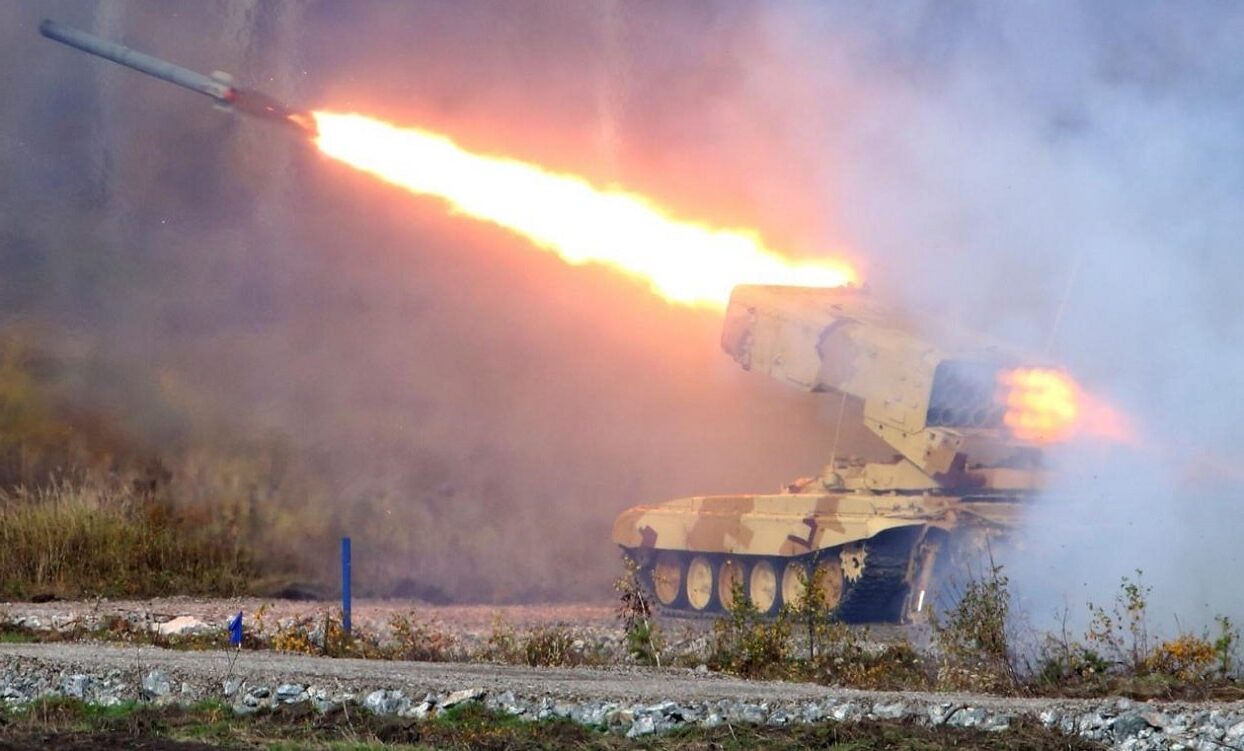 The TOS-1 “Buratino” and TOS-1A “Solntsepek” are some of most terrifying weapons on the modern battlefield.

Heavily armored and loaded with a rack of incendiary or thermobaric rockets, the system is meant to kill or crush any soft target in its path. As such, the Soviets didn’t consider them to be regular artillery pieces, but rather a “heavy flamethrower,” the logical evolution of the World War II sapper who carried a handheld device that shot flames.

But why did the Soviets feel the need to develop such a powerful weapon? Will it remain useful in the future? And why is it called “Buratino” (Russian for Pinocchio)?

The reason for the Buratino’s existence is a result of Soviet studies into ways to improve on the flamethrower. The primary issue with the original flamethrower is the short range, so a logical improvement is to put an incendiary mixture in a rocket instead of spraying it directly. The Buratino brought that similar concept into a much bigger platform.

As flamethrowers are mostly used for assaulting fortified positions, the Buratino is built for the assault role.

The armored launcher has a 360 degree traverse without limitations to make it easy to use in direct fire, it is mounted on a tank chassis so it can keep up with the armored units it’s meant to support, and the weapon is far shorter ranged (only 2.8 or four km) than dedicated artillery to keep flight times short.

This is the Buratino’s key advantage over a traditional multiple launch rocket systems (MLRS) loaded with thermobaric or incendiary rockets, it is far more precise and rapid than a barrage fired indirectly.

A secondary role for the Buratino is to use incendiary rockets to neutralize potential biological or chemical agents; for that reason, it is assigned to the flamethrower battalions of the Russian CBRN troops.

The Buratino was designed in the 1970s, was adopted in 1980 and saw its first combat service in 1988 in the Soviet involvement in Afghanistan.

By all accounts, it was extremely successful during its combat employment due to the extreme explosive power of the 220mm thermobaric rockets (almost double the caliber of the standard 122mm BM-21 Grad, with the added power of being thermobaric).

According to one Russian site, the Buratino received its name from the shape of the rockets, as the fuse was mounted at the end of a long tube at the nose, making it look like Pinocchio.

Aiming the Buratino is accomplished via means of the commander’s sight, which has a laser rangefinder which feeds information directly into the fire control system. This adjusts for the vehicle’s pitch and roll and then provides a firing solution.

Once the commander is ready, he can choose to launch the rockets individually, in pairs or in a whole salvo. The launcher has twenty-four rockets at the ready in three rows of eight.

Replenishment is accomplished either by an unarmored Kamaz truck which carries two twelve-rocket racks or a T-72 chassis which carries the same. The T-72 chassis seems to be more popular as it is more usable in austere environments where the TOS-1 is likely to operate.

In the event that the vehicle gets hit, the Buratino’s crew is more heavily armed than a regular tank crew, with racks inside for an RPK-74 light machine gun, five RPG-26 light anti-tank rockets and two AKS-74 assault rifles in addition to grenades.

The later TOS-1A “Solntsepek” (Sunshine) is a simple upgrade of the Buratino meant to use longer range rockets that can go out to six km. It also features more armor on the launcher, although that is still definitely the weak spot compared to the hull.

Overall, the Buratino and Solntsepek are very useful weapons for a military that might be going into urban combat with little regard for collateral damage. Those qualities likely make it popular with customers in the Middle East and North Africa, such as Iraq, Algeria and Syria.

That being said, in a conventional conflict the Buratino needs to be heavily protected on the battlefield, as the launcher itself would be very vulnerable to hits from an ATGM, which could engage the Buratino or Solntsepek from outside of its maximum range.