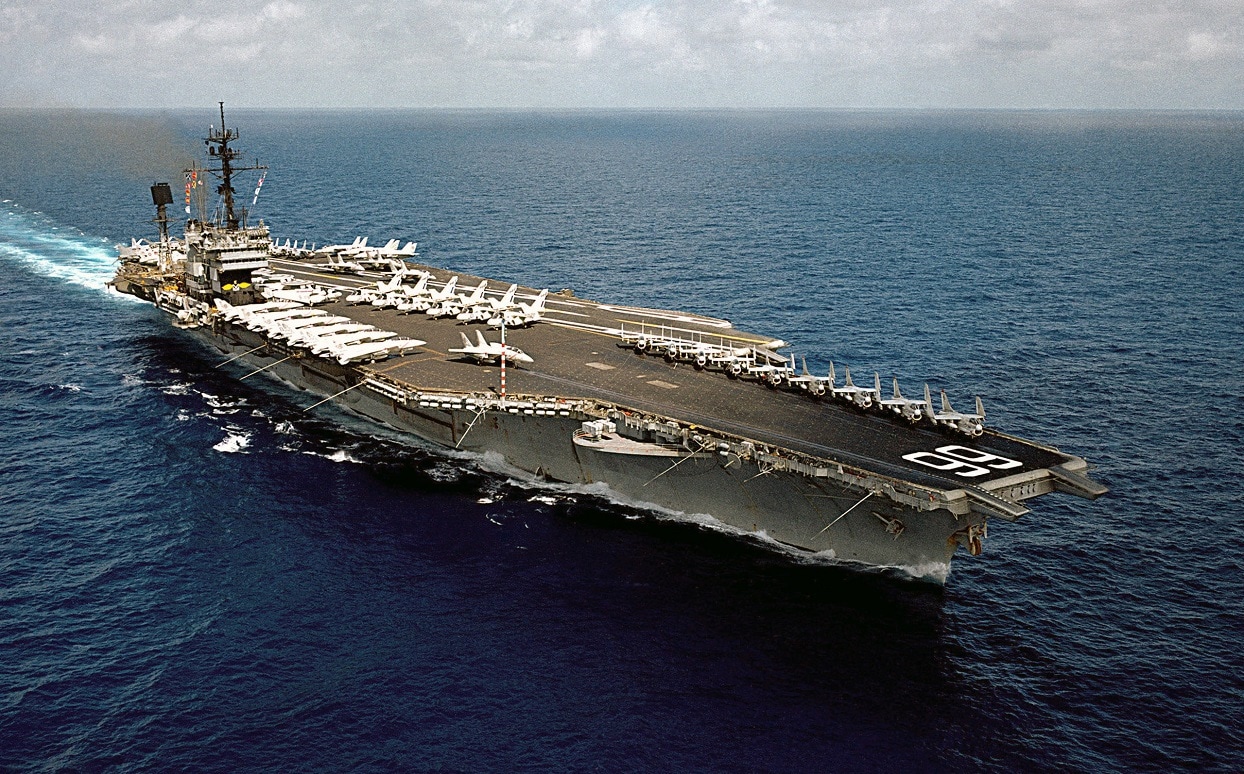 USS America, a 2 Minute History: The USS America (CVA/CV-66)—which was one of three Kitty Hawk-class supercarriers built for the U.S. Navy back in the 1960s—was commissioned in 1965.

The carrier spent most of its time in the Atlantic and Mediterranean but also did make three deployments in the Pacific Ocean while serving during the Vietnam War. In addition, it took part in key operations during the Persian Gulf War. Here time on the high seas during the Cold War is nothing but pure legend and one for the history books.

According to USSAmerica.org, the supercarrier was “originally ordered as an Enterprise-class nuclear carrier, the ballooning costs of Enterprise during construction caused the cancellation of the nuclear CVAN-66 and her reordering as a conventionally powered Kitty Hawk-class carrier.”

The site continued: “Her keel was laid down on 1 January 1961 at Newport News, Virginia, by the Newport News Shipbuilding and Dry Dock Corp.; launched on 1 February 1964, she was sponsored by Mrs. Catherine McDonald, wife of Admiral David L. McDonald, the Chief of Naval Operations at that time. She was commissioned at the Norfolk Naval Shipyard on 23 January 1965 with Captain Lawrence Heyworth Jr., in command.”

The supercarrier was stationed in Hampton Roads for operations off the Virginia Capes till March 1965.

Then “she conducted her first catapult launch on 5 April 1965, with Commander Kenneth B. Austin, the Executive Officer, piloting a Douglas A-4C Skyhawk. Later proceeding to the Caribbean, America conducted shakedown training and concluded it at Guantanamo Bay on 23 June 1965.”

“Entering the Norfolk shipyard for post-shakedown availability on 10 July 1965, she remained there until 21 August. She next operated locally through late August and then proceeded to the operating areas off the Virginia Capes and to Bermuda, arriving back at Norfolk on 9 September 1965,” it continued.

Then in late 1965, the USS America sailed off for its first Mediterranean deployment, starting a thirty-year adventure for her country.

USS America certainly saw serious action in hot spots all over the world. America would take part in military operations off the coasts of Libya, Iraq, Haiti and Bosnia, and many other areas around the world. Unfortunately, on August 9, 1996, after many years of faithful and dedicated service to the nation, a decommissioning ceremony was held.

After a long multi-decade career, she was finally pulled from service

However, in 2005, she was scuttled southeast of Cape Hatteras after four weeks of tests. She was the largest warship ever to be sunk.

“America was the first large aircraft carrier since Operation Crossroads in 1946 to be expended in weapons tests,” USSAmerica.org noted, adding that there were plenty of protests demanding that the supercarrier be instituted as a memorial museum.