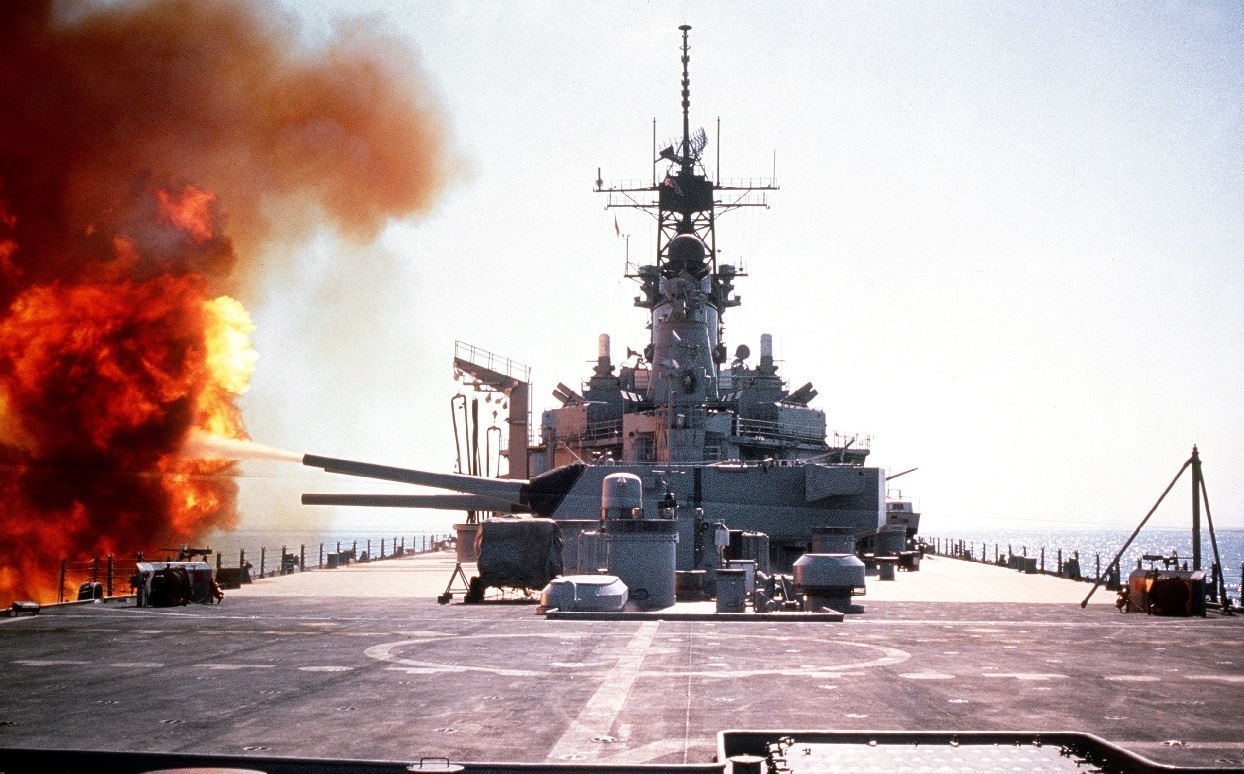 When the U.S. Navy wanted to take out targets 23 miles away, the battleship USS Wisconsin was the go-to ship for awe-inspiring naval gunfire. Battleship Wisconsin was one of the most heavily-armed warship ever built. It was also relatively fast for a battleship with a top speed of 30 knots. Battleships were normally associated with World War Two, but Wisconsin even served in Operation Desert Storm. This ship was in reserve as late as the late 1990s, and in 2006 it was finally retired and assigned to be a museum vessel in Norfolk, Virginia.

Nicknamed the “Big Whiskey,” Wisconsin served in World War Two, the Korean War, and the first Gulf War. In World War Two, it fought in the Philippines, Iwo Jima, Okinawa, and even shelled Japan.

USS Wisconsin Had Mighty Firepower from the Beginning

Its suite of arms was impressive. No enemy ship wanted to mess with Wisconsin’s firepower. She had nine 16-inch guns in three-gun turrets, which could send 2,700-pound armor-piercing shells some 23 miles. Wisconsin was also armed with twenty 5-inch guns mounted in twin-gun turrets, which could eliminate targets up to nine miles away. When fired, the guns recoiled around four feet which made it look like the ship was going sideways.

Displacing a massive 45,000 tons, it had a crew of 1,900 sailors. The battleship’s armor consisted of 12-inches of a combination of nickel and iron around the hull with 17-inches of protection around the gun turrets.

Wisconsin returned to combat in 1951, after deactivation at the end of World War Two. The battleship destroyed numerous ground targets in North Korea and these actions resulted in Wisconsin winning its sixth battle star.

Packed with New Weapons in the Late 1980s

The Reagan administration wanted Wisconsin to take a major role toward the end of the Cold War as it became a missile-launching battleship. By 1988, the ship came back to life bustling with modern weapons. It was modernized and armed with a launcher for Harpoon anti-ship missiles, 32 Tomahawk cruise missiles, and four Phalanx anti-missile Gatling-type guns to protect against enemy missiles.

During the “shock and awe” bombing phase at the beginning of Operation Desert Storm in 1991, Wisconsin helped initiate the campaign by firing 24 Tomahawk missiles at targets in Iraq. Then it destroyed various enemy, artillery batteries, command posts, and infantry bunkers during 36 fire missions.

But here mission did not stop there. Wisconsin wasn’t just a battlewagon, it also delivered cargo and mail to the soldiers, airmen, and Marines who were fighting Saddam Hussein’s hordes. Plus, it took part in the deception campaign that demonstrated a fake amphibious landing to mislead the Iraqis.

But the age of the battleship was over decades prior, and the Navy decided it was time to retire this warship once and for all. Finally, in 2006, the Big Whiskey was decommissioned for good. But what a colorful history. It had a feature role in three wars. It ever showed that World War Two-era battleships could still have a part to play in modern warfare. And Wisconsin convinced the navy that well-built ships could survive for decades. Now that is some serious naval history.