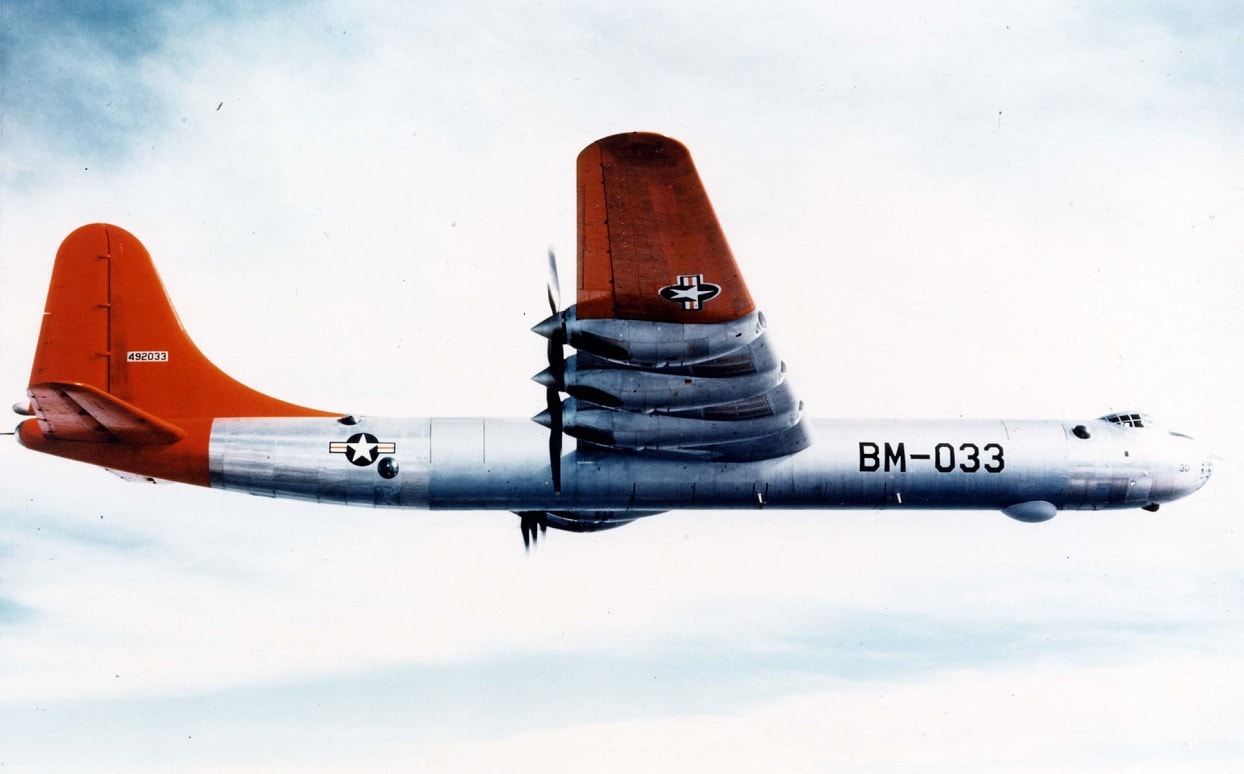 The piston-engined Convair B-36 Peacemaker—boasting a wingspan of two hundred thirty feet—was one of the largest airplanes ever built and was considered a key to maintaining peace during the Cold War with Russia.

According to defense writer Dario Leone at the Aviation Geek Club, “the genesis of the Convair B-36 Peacemaker can be traced to early 1941, prior to the entry of the U.S. into World War II. At the time, the threat existed that Britain might fall to the German ‘Blitz’, making a strategic bombing effort by the U.S. Army Air Corps (USAAC) against Germany impossible with the aircraft of the time.”

He continues: “As the Pacific war progressed, the U.S. increasingly needed a bomber capable of reaching Japan from its bases in Hawaii, and the development of the B-36 resumed in earnest. Secretary of War Henry L. Stimson, in discussions with high-ranking officers of the U.S. Army Air Forces (USAAF), decided to waive normal army procurement procedures, and on July 23, 1943 … the USAAF submitted a ‘letter of intent’ to Convair, ordering an initial production run of one hundred B-36s before the completion and testing of the two prototypes. … The aircraft was unveiled on August 20, 1945 (three months after V-E Day), and flew for the first time on August 8, 1946.”

How Would It Do in WWII?

Since the B-36 only took to the skies after the conclusion of World War II, some have wondered how effective the aircraft would have been against Germany and Japan.

“It would have been awesome. While the cruise speed of the B-36 was basically the same as the B-29 (around two hundred thirty-five mph) it could do it at over forty thousand feet! There were no anti-aircraft cannon that could reach that altitude in World War II,” aviation expert Myke Predko noted on Quora.

“Its range of four thousand miles (in the early versions) with a ten thousand-pound payload didn’t quite give it the range to attack Japan from the Aleutians but it could easily attack Berlin from Iceland. For shorter distances, the aircraft could carry up to seventy-two thousand pounds of bombs. Of course, if any fighters could climb to an altitude which would put the B-36 into danger, it could ably defend itself with sixteen twenty-mm cannon (twelve in remote turrets),” he continued.

There was, however, one small issue—being that “the B-36 required much longer, wider, and thicker runways than any other aircraft up to that point in time. When the first B-36 made its first flight, there were only three runways in the world that could handle the aircraft. The efforts to build B-29 runways around the world would be seen as creating goat paths in comparison to the effort that would be required for the B-36. But I would expect the war would have been over much, much sooner.”

In this article:B-36, B-36 Peacemaker, History, NotHome, World War II