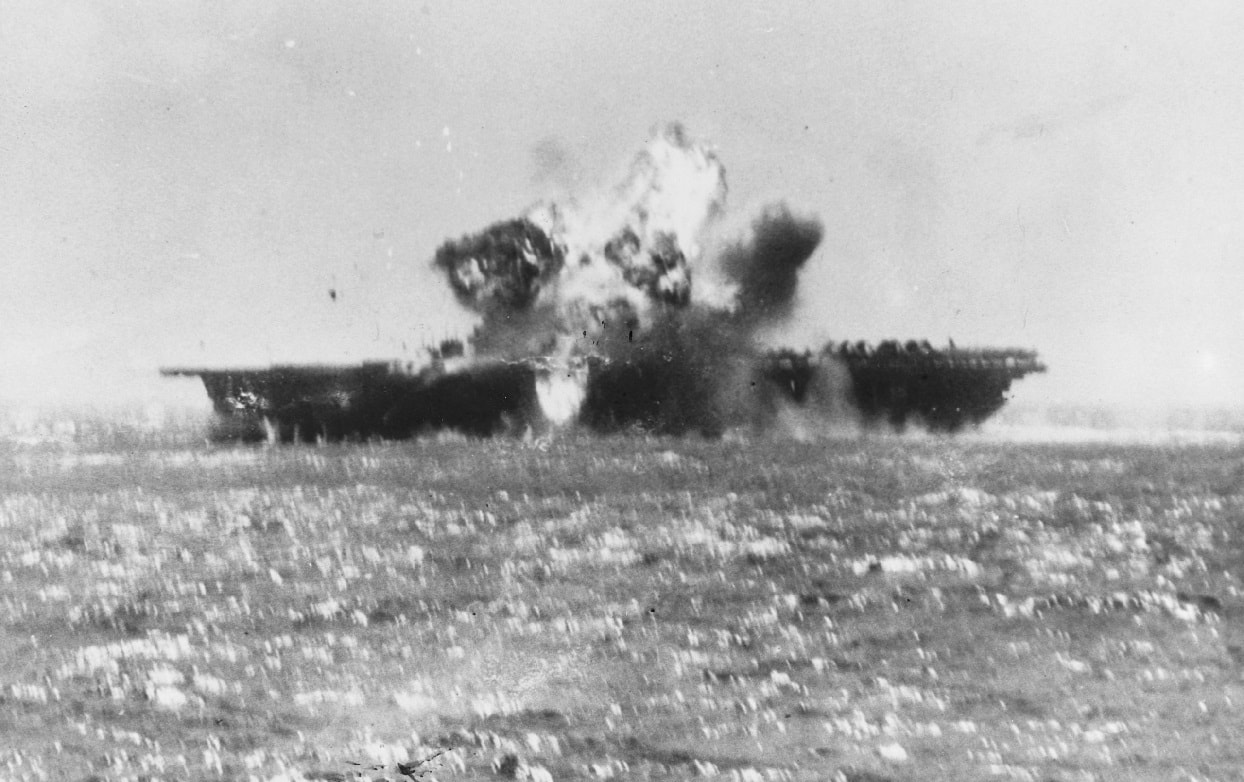 Throughout the Second World War, pilots of all nations were known to make deliberate crashes after their aircraft had suffered severe damage and they didn’t want to risk capture. Such incidents were isolated – but one noted example actually occurred on December 7, 1941 during the Japanese attack on Pearl Harbor.

First Lieutenant Fusata Iida, commander of the Japanese 3rd Air Group, signaled to his wingman that he sustained such damage to his wing fuel tanks that he would be unable to return to the carrier. The 28-year-old Japanese pilot had previously told those in his squadron that should he take significant damage that would make it impossible to return that he’d crash his plane into a high value target. Iida made a run for Hanger 101 at U.S. Naval Air Station, Kaneohe Bay – but as ground fire ripped his plane apart, he overshot the hanger and crashed. Today the “Iida Marker” notes the location of the crash, and it is reported to be the only marker on a U.S. military installation dedicated to an enemy solider.

Whether Iida was the first “kamikaze” remains an issue of debate, but he certainly wasn’t the last.

Kamikaze is typically translated as “divine wind,” and historically had referred to the August 1281 typhoons that dispersed the Mongol-Koryo invasion fleets of Kublai Khan, thus saving Japan from a terrible invader. During the Second World War, it was hoped that the kamikaze spirit would once again save the island nation.

Known officially as “tokubetsu kōgekitai” (“special attack unit”) or “shinpū tokubetsu kōgeki tai” (“divine wind special attack units”), the first formal kamikaze suicide attacks began on October 25, 1944 during the ferocious Battle of Leyte Gulf. It was a desperate act, one that was meant to save the Japanese nation from complete and utter destruction.

“I firmly believe that the only way to swing the war in our favor is to resort to crash-dive attacks with our planes. There is no other way. There will be more than enough volunteers for this chance to save our country, and I would like to command such an operation. Provide me with 300 planes and I will turn the tide of war,” Capt. Motoharu Okamura, commander of one of the kamikaze squadrons was quoted as saying prior to the October sortie.

Okamura also remarked that there had been so many volunteers for the suicide missions that he referred to them as a swarm of bees – noting that bees die after they have stung.

The first kamikaze force of October 25, 1944 was composed of 24 volunteer pilots from Japan’s 201st Navy Air Group, and their targets were U.S. escort carriers. One of those vessels, the Casablanca-class escort USS St. Lo (AVG/ACV/CVE-63) was struck by an A6M Zero fighter, and became the first major warship sunk as the result of such an attack. Of the 889 men aboard, 113 were killed or missing and approximately 30 others died of their wounds.

The kamikaze attacks resulted in the loss of more than 3,000 Japanese pilots, while there were more than 7,000 casualties among American, Australian, and British personnel. The greatest such suicide attack occurred on April 6, 1945 with 10 coordinated waves that were directed at warships of the U.S. Navy’s Fifth Fleet off the coast of Okinawa. In total 34 ships were sunk, while hundreds others were damaged. Yet, that divine wind was unable to turn the tide. Japan was devastated, but the nation survived the war.

While he survived the war, Okamura shot himself in the face as a possible penance for his role in sending so many young men to their deaths.