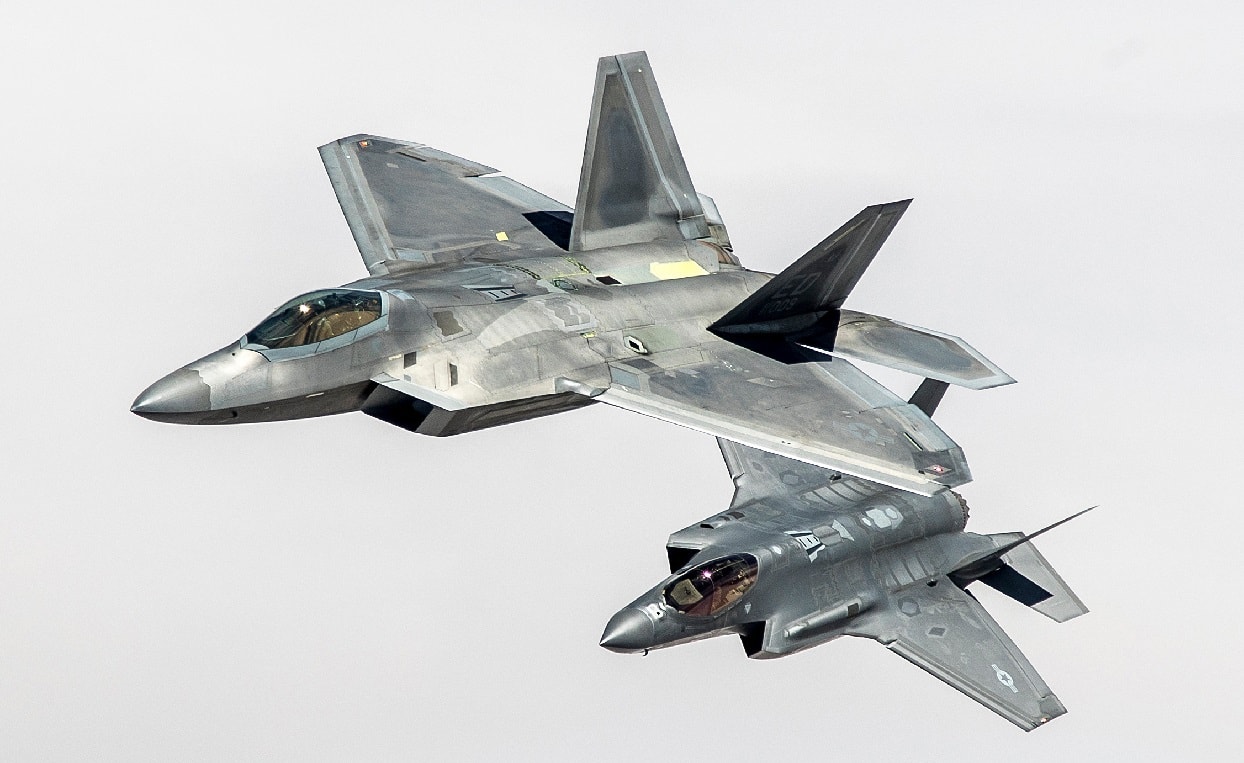 The U.S. military is the most technologically advanced force in the world, and most likely the most fearsome fighting machine of all-time. The Department of Defense’s cutting-edge platforms has been in part responsible for the U.S. global preponderance since the end of the Second World War.

Besides technology, the Pentagon can also field numbers. For example, the U.S. Air Force and the U.S. Navy are respectively the first- and second-largest air forces in the world with a combined fleet of almost 8,000 aircraft. In comparison, the Chinese People’s Liberation Army Air Force, the third-largest air power in the world, can fleet a bit more than 3,000 aircraft.

But the U.S. military has long placed emphasis on quality over quantity, in contrast with its old Soviet and current Russian and Chinese adversaries. At the heart of this focus on quality is America’s fighter and bomber jet fleets. The F-22 Raptor and F-35 Joint Strike Fighter 5th generation stealth fighter jets are prime examples.

But despite being the most advanced fighter aircraft on the planet, these two jets are not the same. Equally important, these two fighter jets aren’t competitors, despite comparisons that have surfaced.

Indeed, to think of the F-22 and F-35 as competitors is to lose the point of their existence.

Introduced in 2005, the F-22 is an air superiority multi-role fighter jet. The Raptor was the first stealth fighter jet in the world to become operational, and to this day, remains one of four stealth fighters flying (the F-35, Russian Su-57, and Chinese J-20 completing the stealth quattro).

The F-22 is extremely maneuverable due to the aircraft’s two-dimensional thrust vectoring capabilities and high thrust-to-weight ratio. With respect to the former, the Raptor can literally be flying in one direction but use its thrust vectoring tech to point the thrust of its engines elsewhere, allowing it to change directions rapidly. As far as the latter, the F-22 has a weight of about 43,000 pounds, while its two Pratt & Whitney F119-PW-100 turbofan engines can produce more than 70,000 pounds of combined thrust.

As a result, the F-22 can fly well in the thin air of higher altitudes—the aircraft has an operational ceiling of 65,000 feet—but also do impressive aerobatics in the thicker air at lower altitudes. Spectators at air shows have seen the Raptor defy physics and naysayers and do backflips.

As we have discussed previously in 1945, the F-22 can carry a formidable arsenal and maintain its stealth characteristics. The aircraft has a 20-millimeter cannon and can carry a combination of smart and dumb bombs and air-to-air and air-to-ground missiles in its three internal weapon bays. This capability to carry weapons within it means that the F-22 Raptor can deploy in a non-permissive environment and dominate the fight without losing its stealth.

Capable of reaching speeds of Mach 2 and supercruise—or fly at a supersonic speed without the use of its afterburners—the Raptor has an effective range of about 1,850—but that is with the addition of two external fuel tanks that would limit its stealth characteristics.

By 2011, when the production line closed, the Air Force had purchased 186 aircraft, despite initially aiming for 750 F-22s. Out of those 186, only a fraction remains operational.

The F-35 Joint Strike Fighter: The “Quarterback” Of the Skies

The F-35 can carry a smaller loadout in its two internal weapon bays but has a larger effective range without sacrificing stealth.

From supporting a Green Beret team in Africa to taking out Russian radars in Crimea to tracking terrorists in the Philippines, the F-35 can do it all.

There is, however, a crucial condition that comes attached with the F-35. Although the Joint Strike Fighter can perform well in a variety of mission sets as true multi-role aircraft, it doesn’t mean it’s prudent for the Air Force to allow it to do so. As an extremely expensive platform—to this day, the F-35 program is expected to cost $1.7 trillion—using the stealth fighter on missions that other, older aircraft can do might be wasteful. And the Air Force leadership has said so, and that is one of the reasons why the service is buying the F-15EX Eagle II, a 4,5 generation aircraft that doesn’t have any stealth capabilities.

In contrast to the Raptor program, the F-35 is alive and well. The Department of Defense is planning to buy approximately 2,500 aircraft of all types, while more than a dozen countries will be buying or have expressed interest in purchasing about 500 aircraft.

Both the F-22 and F-35 are extremely capable aircraft, but they are intended for different roles, despite sharing some technology and mission sets.

Where the F-35 differentiates from the F-22 is at sensory and connectivity game. Although both aircraft have superb situational awareness, the F-35 takes it a step further by using its sensors, information fusion, and data link capabilities to make other aircraft, even older ones, more deadly and effective.

For example, the Joint Strike Fighter can use its advanced sensors to spot a Russian bomber in the North Sea or a formation of Chinese fighter jets in the South China Sea and then guide a pair of F-15EXs or F-16s to the targets. The F-35’s stealth, moreover, means that the Russian bomber or the Chinese fighters wouldn’t be aware of the danger. Indeed, the F-35 is a true “quarterback” of the skies that can even feed information to naval and ground units that are connected on the same secure, classified networks.

On the other hand, the F-22 is the better “dogfighting aircraft” because it is more agile and can pack more weapons. As such, the Raptor would be the go-to air superiority option in a near-peer war against China or Russia. Against competent militaries and with strong fighter jet fleets and potent anti-air and radar systems, older U.S. fighters jets, such as the F-15, F-16, or F/A-18, would have a difficult time. However, the Raptor’s stealth and powerful arsenal mean that it can operate in a non-permissive environment and clear the skies for less advanced aircraft. Furthermore, it can work with the F-35 to suppress enemy defenses and open the way for theater or even strategic air superiority.

There is a reason why the U.S. military is the most technologically advanced force in the world, and the F-22 Raptor and F-35 Joint Strike Fighter are part of it.