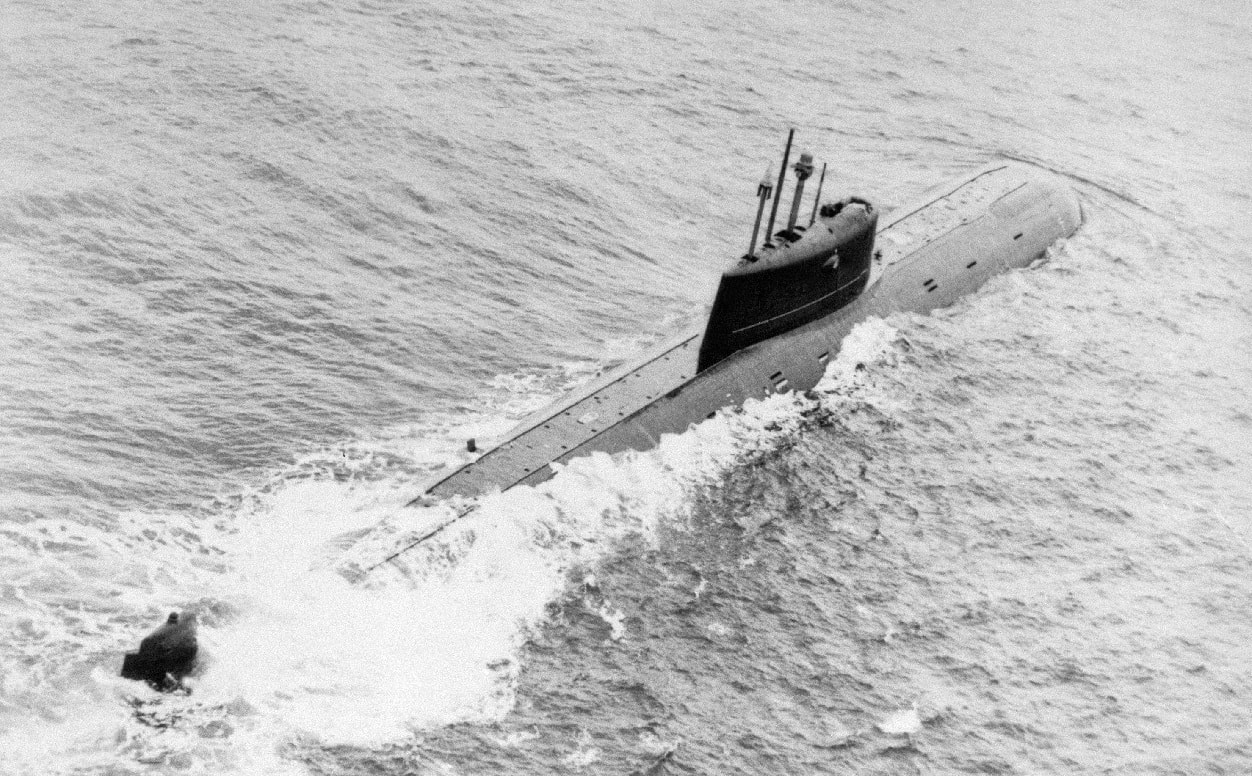 Fire in the Deep

It was April 7th, 1989. At the time of the Komsomolets accident, she was in the Norwegian Sea, at a depth of approximately 1,250 feet, well within her maximum operating depth.

According to a fascinating CIA assessment, a high-pressure air line “connecting to main ballast tanks allowing the submarine to control its depth bursts its seal in the seventh compartment.” Although the events are somewhat confused, it is believed that “a spray of oil hits a hot surface there [in the seventh compartment], and a flash fire begins in the high-pressure oxygen-rich air.”

The Komsomolets was equipped with a freon-based fire extinguishing system. Filling a burning compartment with the non-flammable gas would smother the fire. The Komsomolets Chief Engineer Valentin Babenko and Commanding Officer Captain First Rank Yevgeniy Vanin delay filling compartment seven with freon, as a sailor is trapped inside. Eventually, they fill number seven, killing the sailor trapped inside.

The fire is not extinguished, but spreads to compartment six. The Komsomolets loses power and the propellers stop rotating. In order to prevent the nuclear reactors from melting down, the submarine’s power is turned off and controls are non-responsive. Almost miraculously, the sub is able to initiate an emergency blow, in which air is forced into ballast tanks to bring the submarine to the surface.

With a fire raging inside the submarine, Captain Vanin orders hands topside. The interior of the Komsomolets is so hot, the rubberized sonar-absorbent paneling on the outside of the hull is melting into the sea. At 11:41 Captain Vanin’s emergency signal is received but somehow the transmission is somewhat garbled. Soviet naval command knows that a Soviet submarine, somewhere, is in some degree of danger, but don’t know how much danger—or where.

Due to the Komsomolets location—nearly 1,000 kilometers from the Soviet Union’s border—Soviet Naval authorities are faced with a difficult choice. They can send slower rescue helicopters that can land on water, but don’t have enough fuel for a round-trip, or send a multi-engine plane that could drop rafts to the Komsomolets but wouldn’t be able to land.

A four-engine Il-38 is sent. It can’t land on water. Under ideal circumstances, preparing the plane for an emergency rescue would take nearly 90 minutes. Flight Capitan Petrogradsky takes off from his runway in just 49 minutes flat.

Seeing the Il-38, the crew do not don wetsuits, under the false assumption that their rescue is imminent. But the water is near-freezing, after 15 minutes in the sea, they would perish.

After some time the sea becomes choppy, and the fire inside the hull becomes harder to control. Captain Vanin transmits “I am preparing 69 people to evacuate.”

Although the Il-38 dropped rescue rafts, some founder in the sea, and there aren’t enough for the men, who rapidly lose feeling in their limbs and cannot hold onto the rafts. Some slip away unconscious.

After 1,300 feet an explosion tears through the submarine, releasing their escape pod. At the surface, the rough sea starts flooding the escape pod once the hatch is opened. It rapidly fills, and only one man escapes. Captain Vanin and four others join the Komsomolets at the bottom and forty-two total souls are lost.

Since the 1990s the Komsomolets has remained on the ocean floor. In addition to its nuclear reactor, it also had a pair of nuclear-tipped torpedoes.

In 1992, a team of scientists investigated the wreck, taking radiation measurements. Though the measurements were high, they determined the ocean would sufficiently dilute any leaked radiation, and that attempting to raise the sub would be riskier than leaving it where it lay. The Komsomolets it seems, will stay on the ocean floor for eternity.