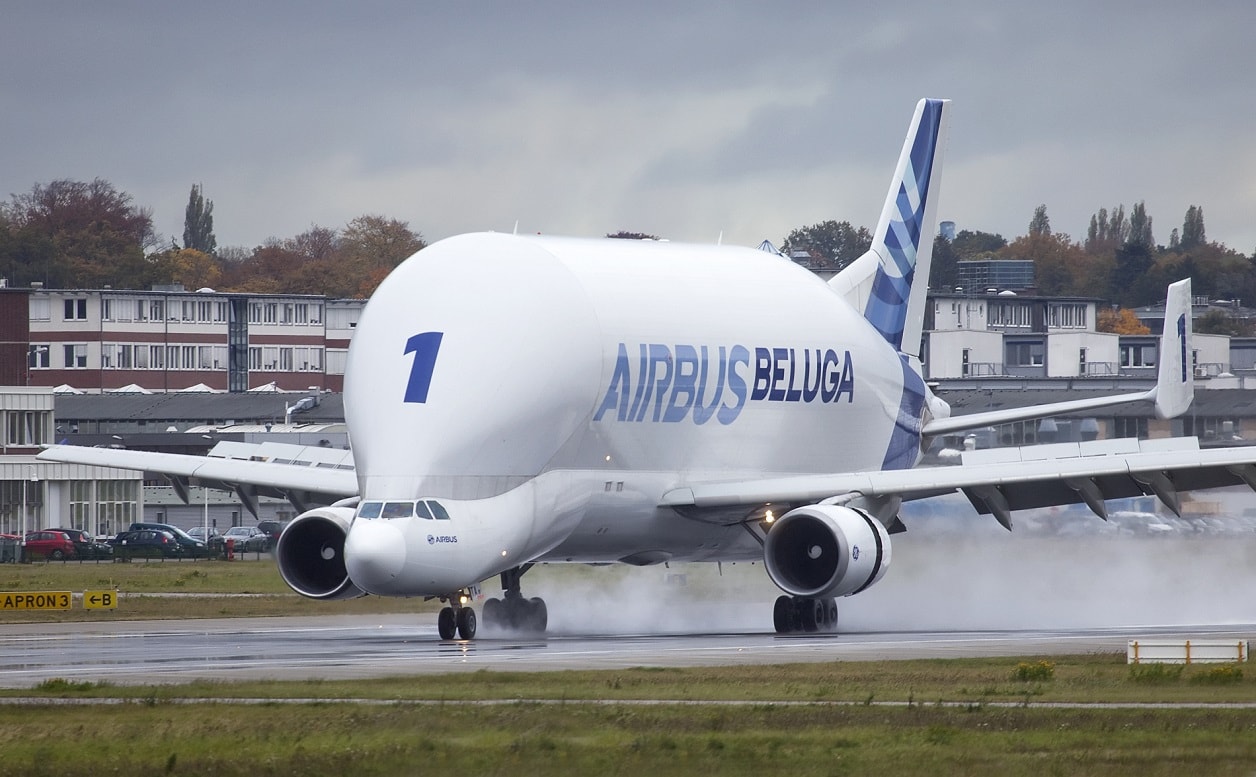 Airbus Beluga Has a Very Special Mission: Airbus is a truly pan-European corporation, and as such has production facilities in Spain, France, Germany, the United Kingdom—not to mention the United States, Canada, and China. The final assembly of Airbus airframes generally takes place in various centers in Europe.

Due to the decentralized nature of production, parts for Boeing airframes are shipped across Europe—a time-consuming and expensive process that was historically done by road transport, or rail when possible. Rail and road transport are not ideal—they’re slow and expensive. In the late 1980s and 1990s, Airbus needed something big enough to transport their components by air.

There was one option—the American-built Super Guppy oversize transport, built by Aero Spacelines of California. As I previously wrote, the Super Guppy was an elongated, large-domed airframe that NASA had contracted to transport bulky parts for the Apollo program and other missions from the West Coast to Florida, for final assembly at Cape Canaveral.

The Super Guppy design was based on a C-97J Turbo Stratocruiser—a Boeing design. Boeing was and remains Airbus’ arch-rival. But they had what Airbus needed.

The Super Guppy airframes were based on 1940s-era passenger airline airframes. By the 1980s they had started showing their age. So, Airbus decided to drop the Guppies in favor of their own design, tailored to Airbus needs.

Airbus settled on the Airbus A300, a capable and proven wide-body airliner that originally debuted in the mid-1970s. Engineers got to work modifying the A300 for oversize cargo transport.

The top of the fuselage was expanded to twenty-five feet in diameter, giving the Beluga its customary puffy look. Loading is done through the top of the expanded section. This section opens upwards, in contrast the Super Guppies, which pivot outwards on hinges like a door.

The Beluga’s transported one of its more unusual cargo items in 1999. A Beluga flew with Eugène Delacroix’s iconic painting Liberty Leading the People, a stylized depiction of the French Revolution. The painting itself was nearly ten feet tall and twelve feet wide, and could not fit inside other commercial airliners, so the Beluga stepped in and flew it from Paris to Tokyo.

In addition to one-of-a-kind pieces of art, the Airbus Beluga has transported components for the International Space Station, large pieces of industrial machinery, and even other planes and helicopters.

Although the cargo area is temperature-controlled, it is not pressurized. It therefore cannot carry certain types of cargo, such as live animals. It is also somewhat hindered by its payload capacity—only 47 tons.

Still, as Airbus’ first oversize cargo plane the Beluga provides a crucial function—and can be seen from miles away.