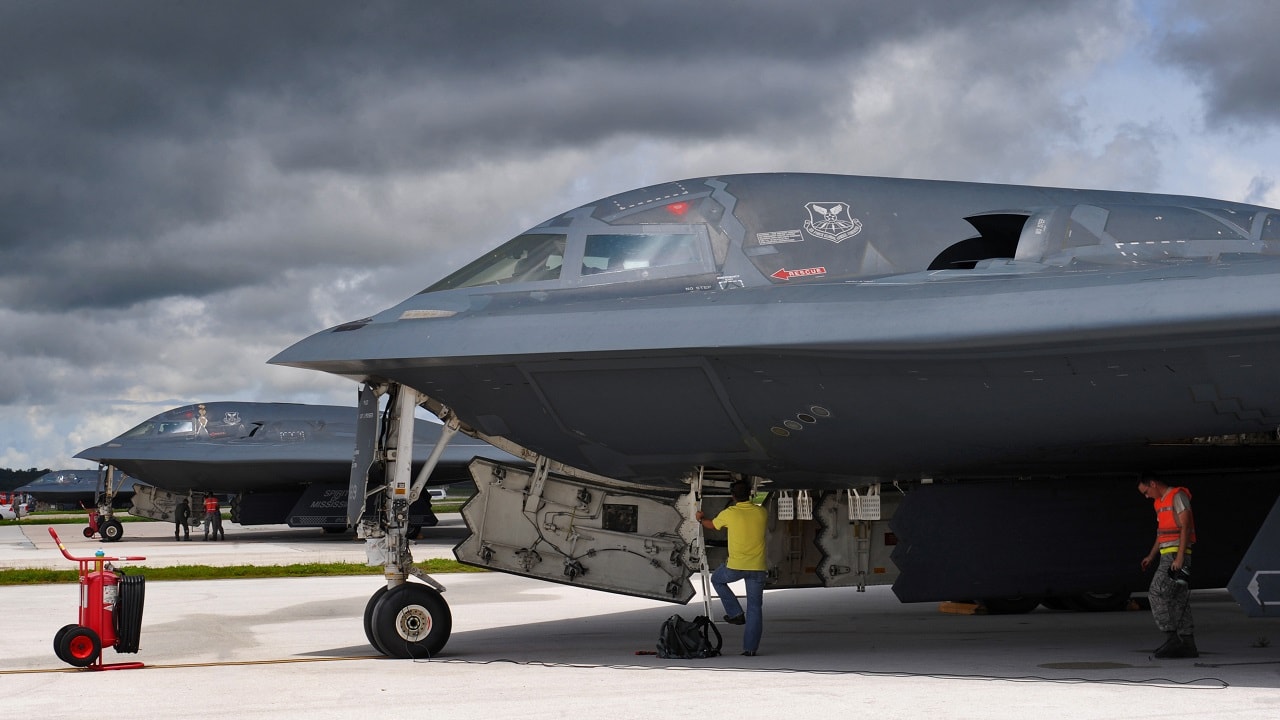 B-2 Stealth Bomber – All of the Facts You Don’t Know and the Latest Controversy: Civilians have pounced on a recent stilled image of a B-2 Spirit stealth bomber that appeared over a farm in Missouri close to Whiteman Air Force Base. This photo was captured by Google Earth, and it has some critics wondering why the stealth technology on the B-2 didn’t hide it better. The enterprising person who used Google Earth cheekily referred to the B-2 as conducting a “crop dusting mission” and you can see the agricultural scene below the bomber in the video here. But is there actually a real problem here or not? Here is a quick rundown of the B-2s history and some very key facts about this one-of-a-kind bomber.

B-2: Is the Sighting on Google Earth a Showstopper?

It’s probably not fair to criticize the bomber’s stealth signature based on one incident on Google Earth, but it is alarming that an app available to anyone with Internet service can track the B-2.

This is, after all, the most expensive and advanced bomber in the Air Force’s arsenal. Adversaries have noticed and could possibly use Google Earth to show B-2s taking off from Whiteman AFB in the future. They could count the number of take-offs, for example, and receive an early warning on intercontinental missions as well as training sorties. Of course, we must keep in mind this is entirely dependent on how often Google Earth updates its maps.

Some Spectators Have Caught a Rare Glimpse

The B-2 sometimes makes appearances at air shows and even conducted a fly-over at the Super Bowl over Raymond James Stadium in Tampa, Florida in January of 2021. But sightings are rare because there are only 20 in service.

The Air Force has plans to use the flying wing until 2032 and gradually put them out to pasture after the B-21 Raider comes onto the scene in five or six years.

The B-2 Has Set Records for Longest Flights

The B-2 was meant to cruise past enemy air defenses with stealth characteristics. The B-2 has also made some historic, record-setting flights. After 9/11, it ventured all the way to Afghanistan for a bombing run that took 44-hours. Then it landed, made a quick change to a replacement crew, and flew back to Missouri in 34-hours.

Crew Rest and Comfort Is Important on Multi-day Missions

How does the crew handle such a long flight? The B-2 actually has a bed, a toilet, and a microwave aboard so creature comforts are covered for pilots who need a break.

It Has Substantial Amounts of Maintenance and Operating Costs

But these features come with a price.

The B-2 is the most expensive bomber in history. It takes over $44 million a year just to maintain it. Each airplane set the DOD back $2 billion. The Air Force originally wanted 132, but Congress put the kibosh on that order and only authorized 21 with one lost during a crash in 2008 to make a total of 20 now flying. None have been shot down in combat.

The Flying Wing Concept Has Been Around Since the 1940s

If you can believe it, the flying wing is not new.

Designers have experimented with the style since World War II when they tested the experimental Northrop XB-35 and YB-35. Then the service branch, known as the U.S. Army Air Forces at the time, went to work. They replaced the props with eight turbojet engines, added four vertical stabilizers, and gave it four air dams.

The development wasn’t always smooth. In 1950, one of the experimental airplanes did a nosedive when the landing gear failed, and the prototype busted in two and was a complete loss. By 1953, the entire flying wing program was retired after only 13 flights.

The flying wing design saw no other development until the Air Force figured it would be the best way to get a stealth model into the air. This was 40 years after the experimental flying wings.

The Enemy Evolved and the B-2 Responded in Combat

Northrop Grumman introduced the B-2 and based it in Whiteman AFB in 1993 because the Russians and Chinese were creating a web of dangerous air defenses with new radars and improved fighter interceptors. It made its combat debut in the War in Kosovo by eliminating Serbian targets without resistance. During that conflict, it destroyed around 33-percent of all targets in the first eight weeks of fighting. Then Afghanistan and Iraq became a rich killing field for the B-2. In 2017, it also removed ISIS terrorists from the battlefield in Libya with GPS-guided bombs.

Important Part of the Nuclear Triad

The B-2 can deploy up to sixteen B-61 or B-83 nuclear gravity bombs on the rotating launchers inside its two weapons bays. In 2018, it carried the upgraded B61-12 nuclear bomb.

It can fly up to 6,000 nautical miles without re-fueling which gives it global reach. The idea is to fly low and use the stealth characteristics to sneak into combat theaters.

Unfortunately, the bomber was not able to sneak past intrepid viewers of Google Earth recently, but that was just a minor hiccup. The B-2, along with the B-1, and B-52 will “deliver the mail” in combat when called upon. And the B-2 will still be able to penetrate deep into enemy airspace. 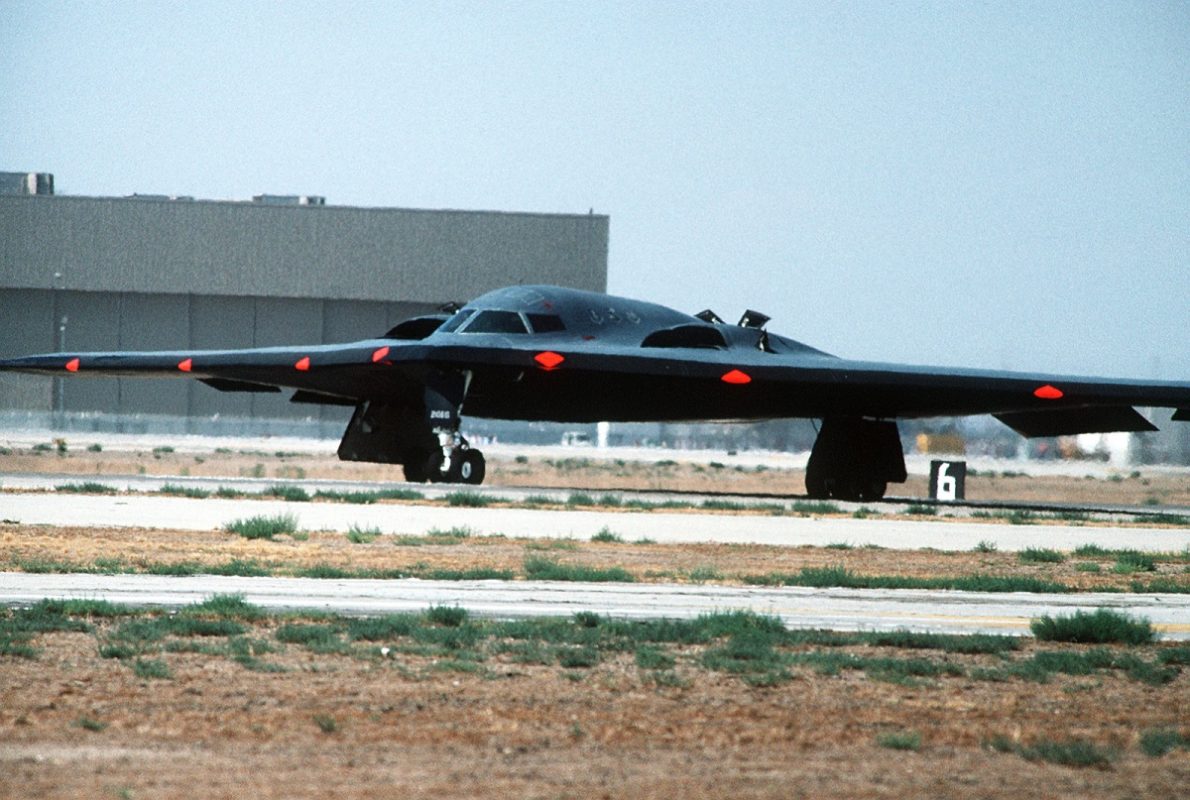 In this article:B-2, B-2 Spirit, B-2 Stealth Bomber, Stealth, US Air Force