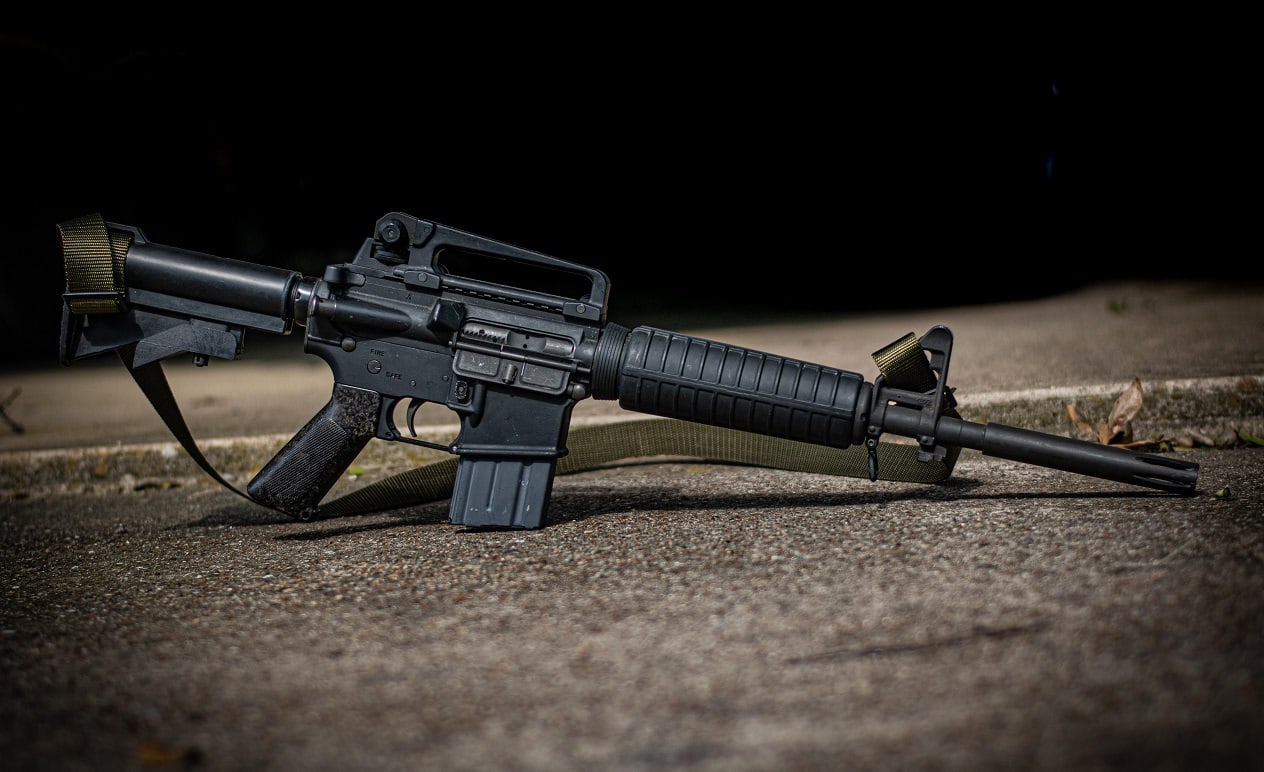 CAR-15, a 3 Minute History – During the Vietnam War, the Pentagon provided U.S. Army Green Berets and U.S. Navy SEALs commandos with a shorter, more compact version of the M16 rifle. The CAR-15 was well suited for the jungles of southeast Asia while still packing the potent 5.56-millimeter round. Although classified as a submachine gun at the time, the CAR-15 was the forerunner of modern special forces weapons and the regular Army’s M4 carbine.

In the mid-1960s, the U.S. Army and Marine Corps purchased a large number of M16 rifles for troops bound for the Vietnam War. The M16 was shorter and lighter than the M14 battle rifle that equipped U.S. ground forces based in the United States and Europe, and would eventually replace the older rifle entirely.

U.S. Army Special Forces troops were on the ground advising South Vietnamese Army units, and in that capacity, the green berets often carried older weapons such as the M-2 carbine. The M-2, dated to the Korean War, was more suited to the size and stature of Vietnamese troops than the M-14 and U.S. advisors carried them to increase commonality with the troops they advised (and sometimes led.) Although a useful weapon, the older .30-caliber cartridge lacked the power of the new, modern 5.56 cartridge.

Colt’s Manufacturing had purchased the rights to the AR-15 rifle from ArmaLite and manufactured the rifles for the Department of Defense as the M16. Colt’s solution to the short rifle problem was the CAR-15. Derived from the Colt Model 607 carbine, the CAR-15 featured a sliding buttstock that reduced overall length and the barrel was shortened from the 20 inches of the M16 to 10 inches. The new carbine also included a forward assist mechanism in the upper receiver, a push button meant to help advance fresh cartridges into battery.

The Pentagon signed a contract in June 1966 with Colt for 2,815 Colt “Commando” rifles, although officially it was known as a “Submachine Gun, 5.56-mm, CAR-15”. Colt completed the deliveries within six months. The first rifles sent to the military were unmodified Colt 607s, designated XM177 in Air Force service and XM177E1 in Army service. Right away soldiers noticed some issues with the new weapon. One major problem was that the drastic shortening of the barrel led to a large, bright fireball at the muzzle and very loud gunshot report—clearly, the flash hider designed for the rifle was not up to the task. Soldiers also noted a problem with accuracy and thought the buttstock too complicated.

Within weeks Colt was back to the drawing board and the result was the new Colt 629 Commando. The 629 featured a slightly longer barrel, at 11.5 inches, and a newly redesigned flash hider. A chrome-plated chamber helped prevent gunpowder residue from accumulating in the upper receiver, leading to stoppages. The result was what the company believed was the best compromise between a compact weapon and one that generated an obnoxious amount of noise and light on the battlefield. The 629 was rebranded the XM177E2 and the Army placed an order for 510 of the E2 rifles in early 1967; the rifles to go to the U.S. Army’s Studies and Observation Group (SOG), Vietnam. Despite the bookish name, SOG was a cover for U.S. Army special forces reconnaissance teams operating in South Vietnam, North Vietnam, Cambodia and, later, Laos. Operating deep within enemy territory for days at a time, green berets and the local troops that fleshed out their recon teams liked the CAR-15 for its compactness and firepower.

Another special forces unit that used the CAR-15 in action were U.S. Navy SEAL teams. SEALs originally carried the Colt 607 but transitioned to the XM177E2 when available. Both SEALs and U.S. Army Special Forces continued to use the XM177 well into the 1970s, working around the lack of new production by cannibalizing some rifles to provide spare parts for others.

The concept of a shorty M16 went dormant into the 1980s, but in the 1990s the U.S. Army officially adopted the M4 carbine. Although not as short as the Colt Commando, as an offshoot of the original weapon separated by more than twenty years of research and development, the M4 is a more reliable and generally refined design. Today the M4 is the standard weapon assigned to U.S. Army and Marine Corps infantrymen worldwide. Another “shorty” M16 was the U.S. Navy’s Mk.18 Mod 0, a weapon with a ten and a half-inch barrel currently issued to Navy SEAL teams. Between the two weapons, the legacy of the CAR-15 rifle lives on.