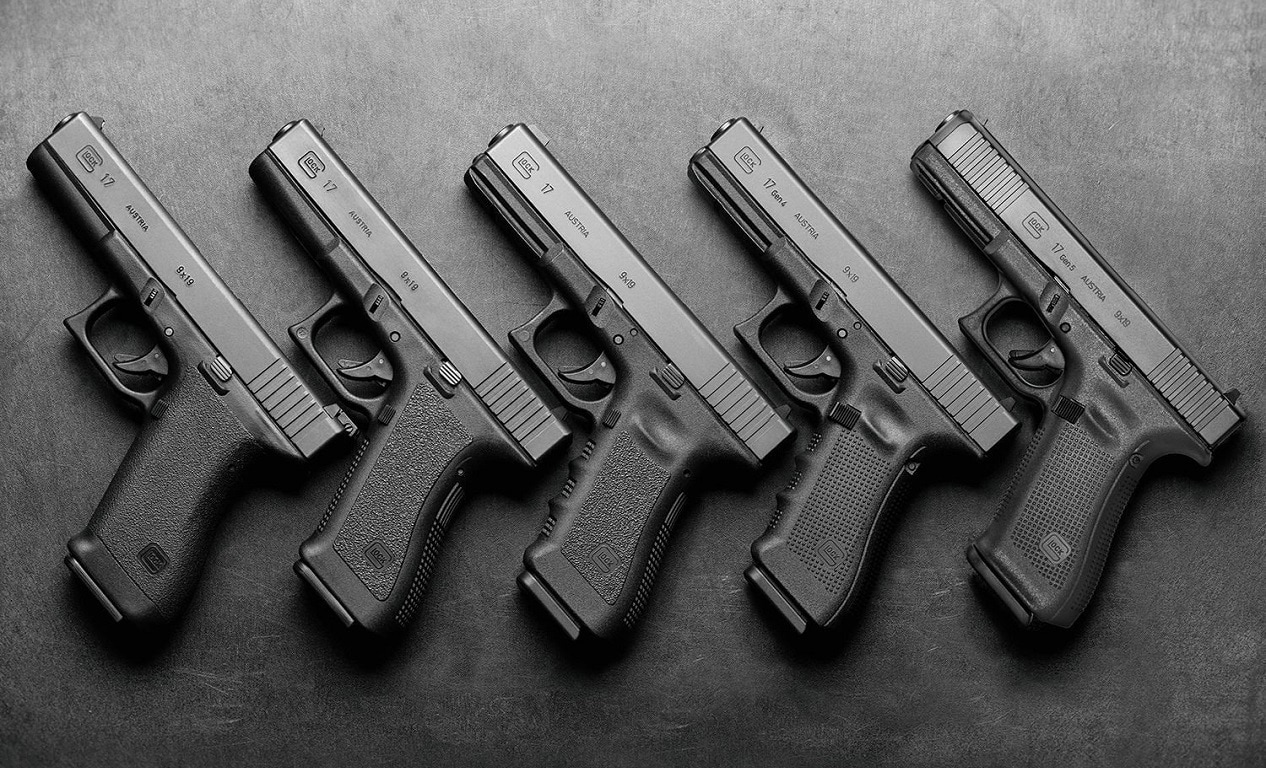 5 Best Guns Ever (Not Made in the USA, Sorry): America has a long and storied reputation as a firearms innovator, but it is by no means the only place for fresh and original designs. Europe, fueled by centuries of continental warfare and colonialism, has consistently produced new arms and ammunition to suit a variety of roles. Worn by military officers, gendarmes, colonial frontiersmen and police, here are five of the best non-American handguns ever produced.

The Pepperbox, one of the earliest revolver designs, had not one but multiple barrels around a central axis. In other words, unlike later revolvers that used a single barrel and a rotating cylinder, a Pepperbox used six rotating barrels/cylinders. This made the Pepperbox very front-heavy and difficult to aim. Unlike in other revolvers, which required manual turning of the barrels, a pull of the trigger fired the round and advanced the cylinder to the next round. This was a very early version of the double-action pistol operating system.

The Pepperbox was of limited military value but was popular in Europe. It was also popular with nineteenth-century Gold Rush settlers in the American West who needed a compact, discreet weapon they could wear while working and still bring into action quickly.

The LeMat revolver was developed by Jean LeMat, a Frenchman who had emigrated to America. The LeMat was a cap and ball revolver, which used a percussion cap to set off a separate gunpowder charge, sending lead ball ammunition flying down the barrel. One of the most unusual and innovative handguns ever, the LeMat was in a way two guns in one—the revolver had two barrels and a nine-round cylinder. The cylinder held ammunition of two different calibers, both .40 or .42 caliber and a larger .60 caliber/20-gauge, though later models were offered in the more practical .36 and .44 calibers.

The LeMat revolver was first produced in small quantities in America, but production moved to Europe with the start of the U.S. Civil War. The Birmingham Small Arms Company of Birmingham, England produced an estimated 2,900 LeMats, with up to 2,400 smuggled to North America to arm Confederate Army units. Like the Colt Dragoon, the LeMat was considered a pistol with the firepower—in this case, ammunition capacity rather than stopping power—that horse-mounted cavalryman wanted.

The British Army was the last major army in the world to use the revolver as a standard service weapon. The Webley Mark I, adopted in November 1887, was a handgun with a six-round ammunition cylinder. The revolver was what was known as a “top-break” revolver: a latch on the top of the pistol frame caused the barrel and cylinder to swing down on a hinge, facilitating loading and unloading. The weapon originally featured a four-inch barrel, but this was later upgraded to a six-inch barrel.

The Webley fired a slow-moving .455 round that packed quite a punch, and the weapon was known its considerable recoil. Nevertheless, despite the recoil, the strong frame, and a reputation for reliability meant Webley revolvers remained in British Army service across two centuries. The final Mark IV version was adopted in 1915 and remained in continuous service until 1947.

The Walther P38 semiautomatic handgun was designed as a replacement for the idiosyncratic World War I–era Luger P08. The P38 was more reliable than the Luger, experiencing fewer jams. The German pistol was an early example of a double-action design, with a single long pull of the trigger both cocking the firing and firing a round. As a double-action revolver, the gun can be safely carried with the hammer down on a loaded chamber. The P38 fired 9×19-millimeter pistol ammunition loaded eight to a magazine. Interestingly, the P38 was also one of the first pistols to include a loaded chamber indicator, which bobbed up when a live round was in the chamber. The Walther P38 was adopted by the German Army in 1938 and served throughout the Second World War. Approximately one million pistols were produced during the war. 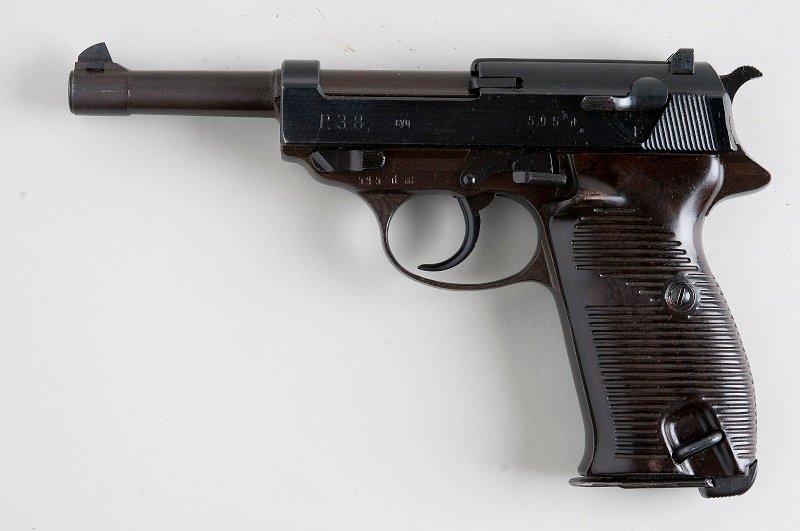 The Glock 17 is almost certainly the most successful handgun of the postwar era. Gaston Glock, an Austrian knifemaker who knew nothing about handguns, developed the Glock for an Austrian Army contract. After studying a number of competing pistols, Glock came up with his own design, which stressed simplicity, reliability and a high magazine capacity over all else. The result was a handgun that consisted of a polymer lower receiver with steel fire-control group and an upper receiver made from a single block of steel. The Glock 17 weighed just twenty-three ounces unloaded, used just thirty-four parts and packed seventeen rounds of nine-millimeter ammunition. 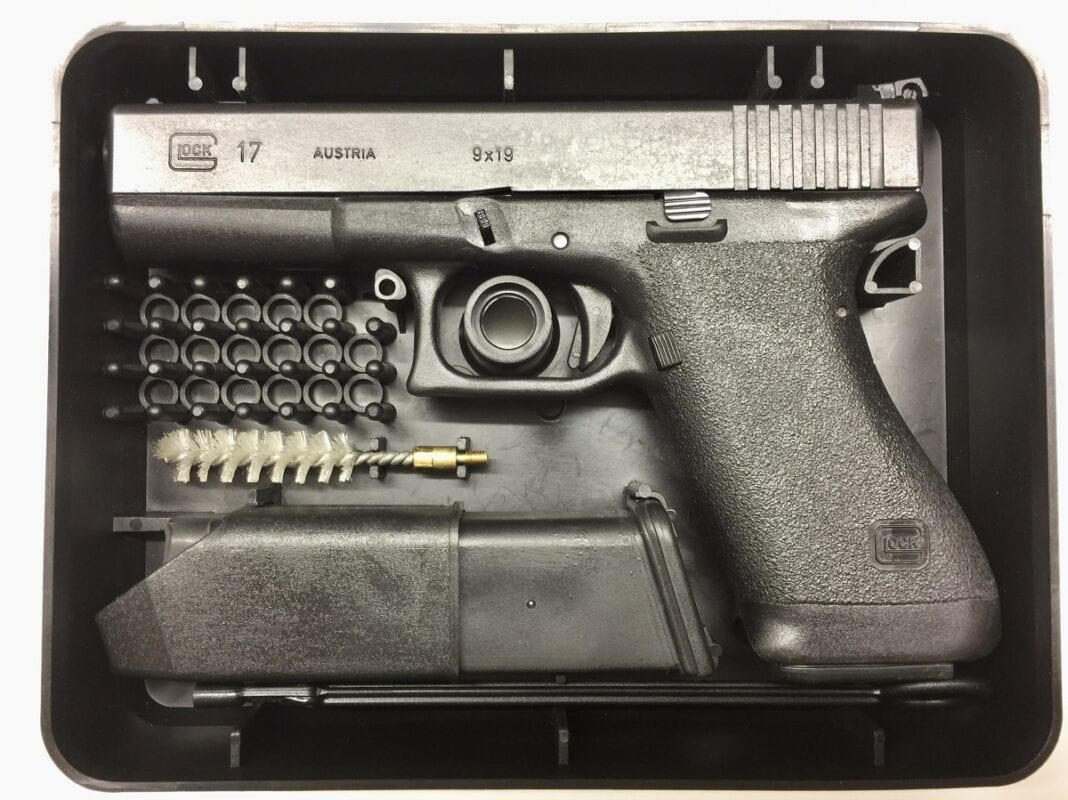 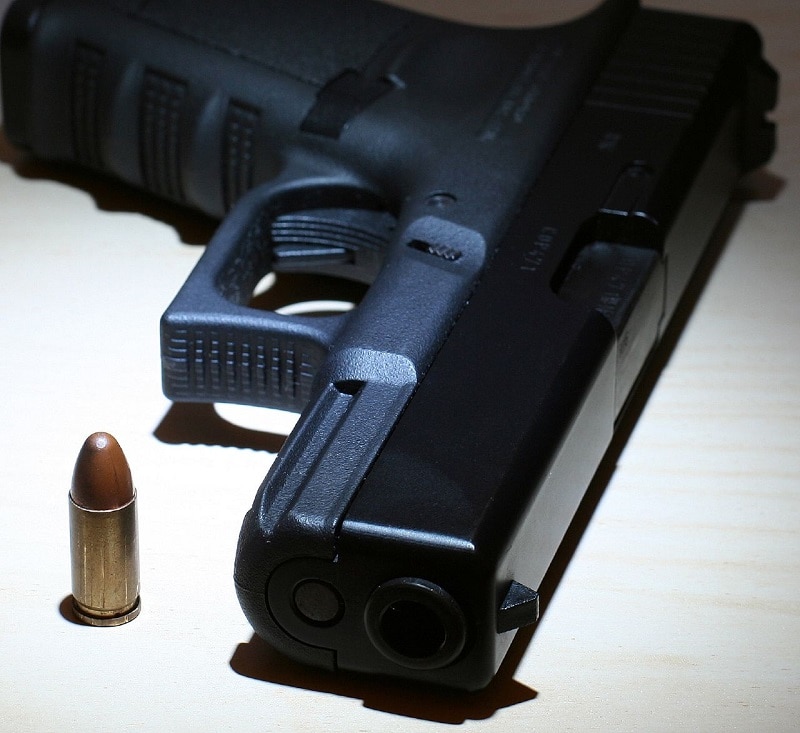