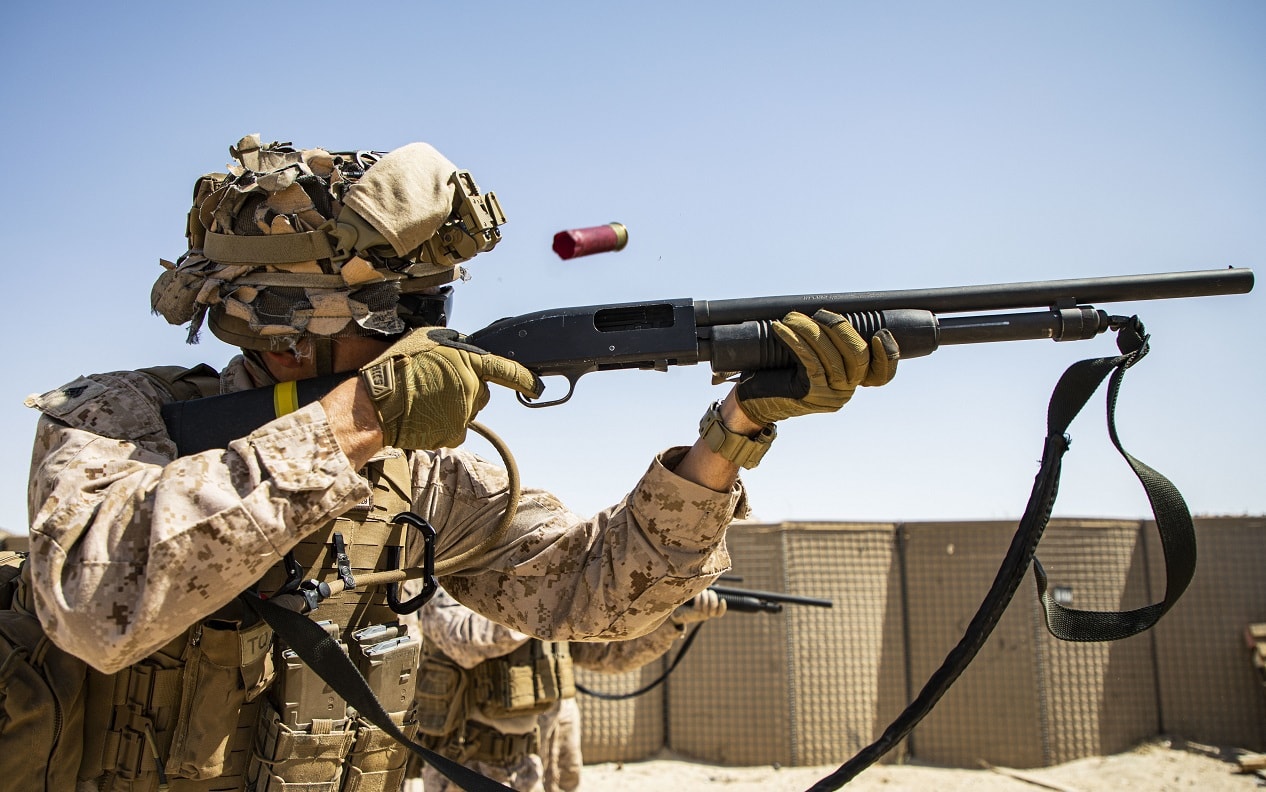 U.S. Marines with 2nd Battalion, 5th Marine Regiment, assigned to Special Purpose Marine-Air Ground Task Force - Crisis Response - Central Command 20.2, fires a Mossberg 590A1 12-gauge shotgun during a combat marksmanship range in Kuwait, June 26, 2020. The combat marksmanship program is designed to improve the Marines accuracy and lethality with their service weapons. The SPMAGTF-CR-CC is a crisis response force, prepared to deploy a variety of capabilities across the region. (U.S. Marine Corps photo by Sgt. Brendan Custer)

The 5 Top Shotguns, Explained – A shotgun is a firearm, typically a long arm that is fired from the shoulder, that instead of a single bullet fires a number of smaller pellets. Shotguns are chiefly sporting arms, useful for hunting birds or other small, fast-moving game, but also have military and civilian self-defense uses. The ability to project a devastating pattern of lead or steel shot to short ranges is also valuable in urban or jungle environments. This makes a properly fitted out shotgun an excellent weapon for home defense or close-quarters combat.

Developed by the prolific American firearms designer John Moses Browning, the Winchester Model 1897 pump-action shotgun was better known as the “Trench Gun” in World War I. Originally designed as a civilian sporting gun, the Trench Gun version sported a twenty-inch barrel, making it easier to handle in the narrow trenches of the Western Front, a bayonet lug for hand-to-hand combat, and a heat shield. Trench Guns were used not only to clear narrow trenches during attacks but also, interestingly enough, to shoot down hand grenades flung towards American lines. The six-round tubular magazine made it a formidable adversary when fired lengthwise down an enemy trench; a single 1897 shotgun could send fifty-hour .33 caliber pellets downrange in three seconds or less.

One of the most common shotguns in circulation is the venerable Remington 870. A manual, pump-action shotgun, the “870” first hit the civilian market in 1950. The 870 is sold in a variety of configurations, with barrel length ranging from eleven inches to thirty, magazine capacity ranging from four to ten shells, and sold in shell calibers from .410 to 12 gauge. The shotgun was quickly picked up for police and prison guard used in the United States and has seen limited service in foreign military forces. Highly modifiable, a stock 870 can be modified by the user into an excellent home defense weapon.

Self-loading shotguns have been slow to catch on in the United States, particularly in military units, for reasons that are not well known. The Beretta 1301 is one of a new generation of semi-automatic combat shotguns. Beretta claims its Blink gas operating system makes the 1301 thirty 6 percent faster than competing shotguns, enabling it to empty its four-shot magazine in just one second. The shotgun has a barrel length of 18.5 inches, making it handy indoors, and an enlarged charging handle that’s difficult to miss in stressful shooting situations. A combination ghost ring and blade sight is supplemented with a Picatinny rail that allows the 1301 to utilize prismatic, red dot or any number of compact optics.

Manufactured by Benelli Armi SpA, a subsidiary of Beretta, the M2 Tactical is a somewhat larger semi-automatic shotgun than the 1301. The M2 has an 18.5-inch barrel but can accommodate five rounds in the internal magazine. The Benelli shotgun also features a pistol grip, and the manufacturer claims it features up to 48 percent less recoil than comparing shotguns. The shotgun is fitted with a variety of iron sights, including ghost ring and tritium sights, and the receiver is drilled and tapped for a MIL-STD1913 Picatinny rail, allowing the user to install specialized optics. The length of pull is unusually long 14 3/8     inches to accommodate the user’s bulletproof vest. The U.S. Marine Corps uses a similar version, the M4, designated the M1014.

The shotgun with the most recent U.S. military pedigree is the Mossberg 500 series pump-action shotguns, including the Mossberg 590. The 590 is the only shotgun that passed U.S. Military specification MIL-S-3443G, which outlines the standards for U.S. armed forces riot-type shotguns with regards to accuracy, endurance, ability to withstand rough handling, and the effectiveness of the supplied heat shield. A typical military-grade 500 series shotgun has all-metal construction, an eight-round internal magazine, manual safety and bead sights. Like other shotguns, barrel length varies quite a bit but the U.S. military’s shotgun barrels are likely 18.5 inches long. The 500 is used by the U.S. Army, the U.S. Navy, and the U.S. Marine Corps.