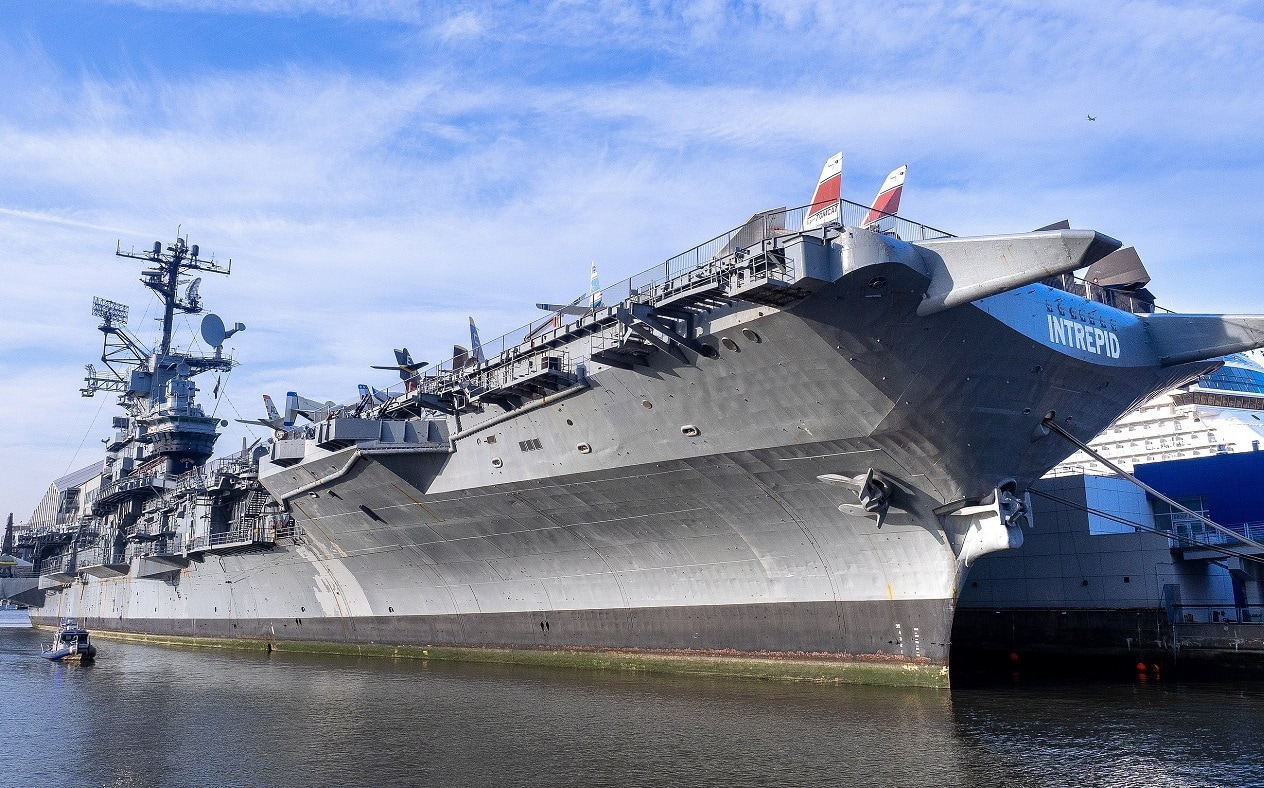 USS Intrepid: The US Navy’s Best Aircraft Carrier Ever? “Intrepid” means “fearless, undaunted, adventurous,” and all those words could certainly describe the World War II aircraft carrier that is now a floating museum on New York City’s West Side. Commissioned in August 1943 the USS Intrepid (CV-11) was the fourth ship to bear the name, but perhaps the one to earn it most.

The keel for the Essex-class USS Intrepid was laid down just six days before the attack on Pearl Harbor in 1941, and upon completion, she immediately headed to the Pacific where she was greeted by a baptism of fire when she took part in the invasion of the Marshall Islands in January 1944. Heavily damaged during the fighting, the ship returned to Pearl Harbor for repairs and then as quickly headed back into action. In October 1944 “The Fighting I” took part in the Battle of Leyte Gulf, the largest naval battle in history. Planes that sortied from the carrier helped sink the Japanese battleship Musashi.

It was soon after that engagement that USS Intrepid suffered her first kamikaze hit, while in November she would be hit two more times by the suicide pilots. In March 1945 a bomb exploded just off the ship’s bow, but despite all this, she remained in action and helped sink the Japanese battleship Yamato just weeks later. By the end of the war, USS Intrepid suffered a total of four kamikaze attacks as well as a torpedo strike yet she survived.

The Intrepid sustained a total of 270 casualties during the Second World War, and November 25, 1944 was the single most deadly day in the ship’s history when two kamikaze aircraft struck the ship and killed 69 crew members. As a result of these repeated attempts to sink her, she became known as “The Ghost Ship” by the Japanese, as she continually returned to action. Truly the ship and her crew were “intrepid” in every respect.

After the war USS Intrepid was called back into service and was extensively modernized by the U.S. Navy in 1954. This included the removal of heavy guns, as well as the centerline elevator, while a new heavy-duty starboard side elevator was installed along with a new flight deck to handle modern combat jets. She became the principalship for multiple space mission recoveries including the recovery of the Mercury 7 and the Gemini 3 space capsules.

The USS Intrepid took part in three tours in Vietnam before being finally decommissioned in 1974. She served as an exhibit ship at the U.S Navy and Marine Corp bicentennial celebrations in Philadelphia in 1975-1976, before becoming a floating museum in New York City in 1982. While she hosted many special events and even served as an FBI operations center after the 9/11 attacks, the greatest foe was simply the elements and after years of neglect, she required badly needed repairs.

Fortunately, after a nearly two-year restoration effort from December 2006 to October 2008, which cost nearly $60million, the USS Intrepid was restored, renovated and ready to preserve the history of those who served aboard her.

On Veterans Day, November 11, 2008, she was officially rededicated by President George W. Bush, and today the ship is the centerpiece of the Intrepid Sea, Air & Space Museum. The museum proudly displays more than 30 aircraft and chronicles the story of the ship that just wouldn’t be sunk.