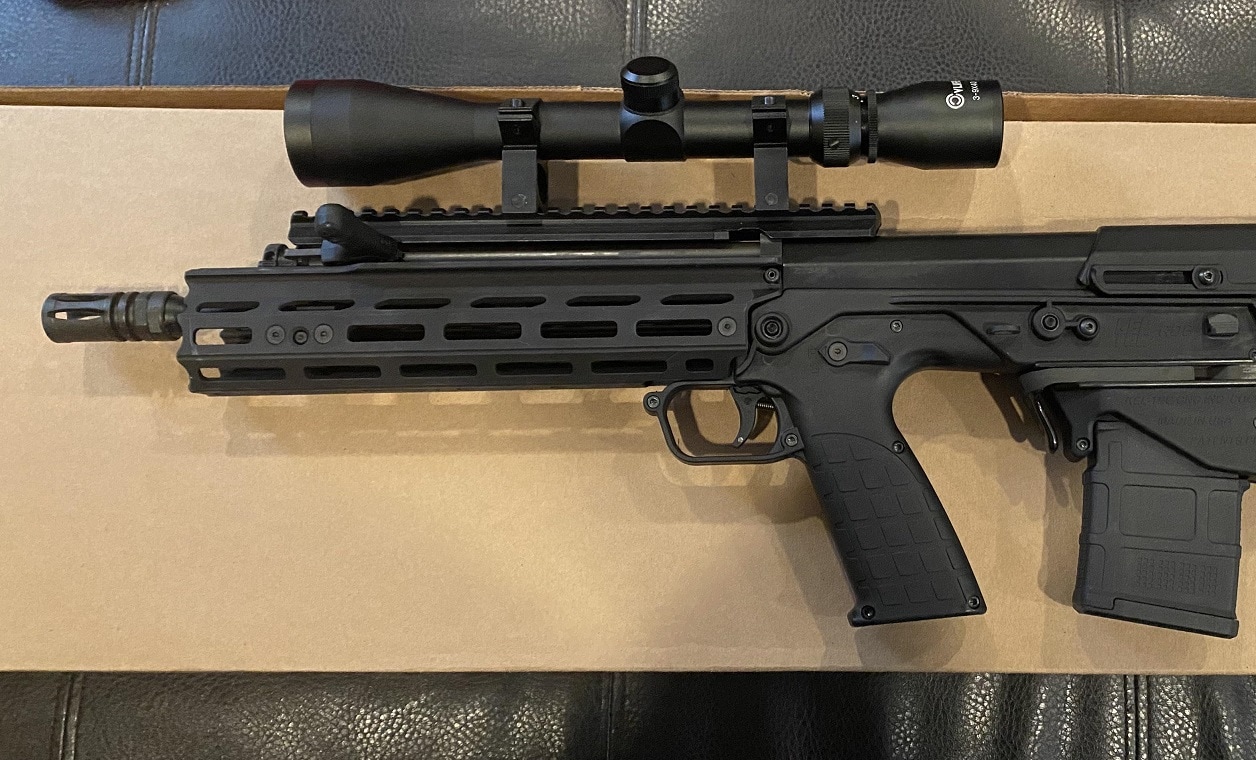 Kel-Tec RDB Rifle Is Special for 1 Reason: With the notable exception of the German-designed MP35 machine pistol in the 1930s, most early compact small arms have been designed with right-handed shooters in mind. For decades south paws had to simply deal with bullets ejecting across their face. In recent years there have been attempts to produce ambidextrous designs, notably the IWI Tavor and Steyr AUG – but those required that the shooter physically swap the bolt and extractor, and even required special parts.

The Kel-Tec RDB – as in “Rifle, Downward-ejection, Bullpup – is a truly compact firearm that features a completely ambidextrous design. It utilizes a rotary bolt with a spring-loaded ejector with a downward-facing extractor. The result is that spent shell casings are ejected downward through the stock and behind the magwell.

The compact rifle features a bullpup configuration, which passes the magazine in the stock. This isn’t exactly a revolutionary concept in 2021; rather Kel-Tec’s design is actually quite evolutionary, building on the Steyr AUG, FN 2000 and SA80 while offering notable improvements.

This includes a gas regulator that is built into the Barrel Assembly Group, which can allow the shooter to adjust the amount of gas used to cycle the action; while the bolt utilized dual ejectors to assist in positive ejection. This feature also allows shooters to tailor the bolt carrier speed to eliminate excessive recoil – such as when using a suppressor or to ensure reliability for various loads. Moreover, while it is unlikely that someone would ever need to fire the rifle upside down, it could still be done.

The RDB, which fires from a closed bolt, also features a non-reciprocating charging handle that has been described as being similar to the HK MP5 in its function. It can be pulled back and rotated upward to lock the bolt open, then pushed downward to load the cartridge. Although it isn’t actually necessary, the charging handle can be swapped from left to right during disassembly.

The RDB series of semi-automatic bullpups are chambered for 5.56x45mm NATO, and currently includes four models. The standard RDB model for the U.S. market is the RDB-17, which features a 17.2-inch barrel with 1/7 twist. It features a high-impact resistant Zytel forend with built-in Picatinny-style rail on the bottom for mounting accessories.

The RDB Defender is a lightweight version that is features an aluminum, M-LOK handguard, collapsible stock and 16-inch barrel; while the RDB Hunter features a traditional style assembly rather than pistol grip to house the trigger and cross bolt safety – and also includes a swivel stud bipod mount, along with 20-inch threaded barrel. The RDB Survival is the smallest and lightest of the lineup, and according to Kel-Tec was designed for use in the back country, providing center fire rifle power in a compact and lightweight package. The Survival features a 16-inch lightweight barrel, folding sights and collapsible stock.

The MSRP for the RDB17 is $1,000 – less than half the current price for the Steyr AUG A3 M1. For the budget-minded who want something different, Kel-Tec hits the bull’s eye.