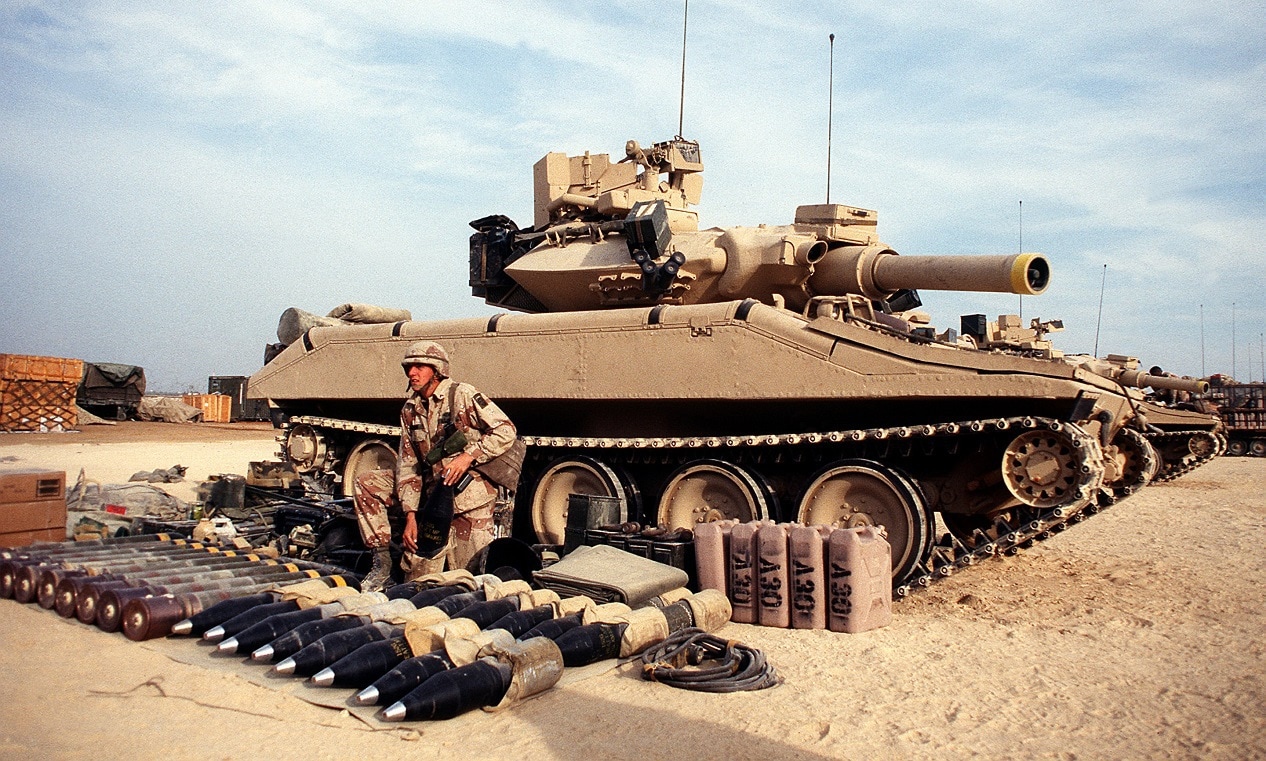 M551 Sheridan: A 6 Minute Explainer – The M551 Sheridan light tank is largely remembered as a curiosity, an innovative weapon system that proved an overcomplicated failure in action. However, several hundred Sheridans provided useful service in three wars, and left behind a small but noticeable gap in the force structure since being withdrawn in the 1990s that the Army has struggled to fill. That’s because the Sheridan was easily transported by air and could even be dropped by parachute.

The Sheridan, named after the Union cavalry general of the Civil War, was introduced in a time when the U.S. Army was abandoning the concept of light tanks in favor of the main battle tank: why bother with a tank that traded armor and armament for speed when you could design one that balanced all three qualities?

But the Patton tanks of the era were still relatively slow, with a maximum speed of around thirty miles per hour, and the airborne divisions lacked a tank light enough to be airlifted to a drop zone. Experience in World War II had shown airborne troops were vulnerable to armored counterattacks after a parachute drop, and could benefit from mobile antitank weapons to counter them. In fact, the U.S. Army had earlier developed the glider-borne M22 Locust tank, which were dropped in action with British paratroopers in the crossing of the Rhine. Furthermore, the Soviet Union began fielding the amphibious PT-76 light tank, and the U.S. Army felt compelled to match that capability.

In the end, the Army spent $1.3 billion on the M551 Sheridan “Armored Reconaissance/Airborne Assault Vehicle”—which was definitely a tank, regardless of the nomenclature—and produced more than 1,562 of them between 1966 and 1970. Weighing in at fifteen tons and capable of rolling along at forty-three miles per hour, the Sheridan housed a crew of four in a thinly armored steel turret and aluminum hull. A hinged flotation screen could be extended from the top of the hull to permit river crossings at about three miles per hour.

The Sheridan’s most unusual feature was its large M81 152-millimeter gun/missile system. Capable of firing enormous caseless shells more devastating to infantry than the 90- or 105-millimeter shells fired by Patton tanks at the time, the short-barreled gun lacked the muzzle velocity to be accurate at long ranges or pierce heavy tank armor through kinetic energy. Against armored threats at medium or long range, the gun could instead launch the newly developed MGM-151 Shillelagh antitank missile at targets up to two or three kilometers distant. It seemed like a brilliant solution to cramming heavy firepower into a lightweight vehicle. Each Sheridan carried nine Shillelaghs and twenty shells as standard, as well as .50 caliber and 7.62-millimeter machine guns mounted on the turret and hull, respectively.

The influential Gen. Creighton Abrams was a believer in Sheridan, and once 152-millimeter ammunition was available, he dispatched the first of a total of two hundred Sheridans to Vietnam in January 1969. The first served with the tank companies of Third Squadron of the Fourth Cavalry Regiment and the Eleventh “Black Horse” Armored Cavalry Regiment (ACR), replacing heavier and slower M48 Patton tanks. Combat soon revealed some of the serious deficiencies of its unconventional armament.

The Sheridan’s light frame often leaped upwards into the air with each shot from its heavy main gun, potentially causing chest injuries to the commander if he was peering over the hatch, and also often scrambling the missile system’s electronics. This, combined with a ponderous partially automated loading system, reduced the gun’s rate of fire to around two rounds per minute, in which time an experienced M48 tank crew could potentially fire a dozen or more ninety-millimeter shells. Furthermore, the caseless rounds had loose propellant that posed a safety hazard under combat conditions.

The Sheridan’s greatest shortcoming in the field lay in survivability, as is usually the case with light tanks. The M551’s armor was not intended to repel anything heavier than a heavy machine gun round, so the tanks were highly vulnerable to the land mines and rocket-propelled grenades widely employed by Vietnamese adversaries. Even worse, the Sheridan’s store of caseless 152-millimeter shells was prone to detonating catastrophically when the vehicle was penetrated, which, compounded with the M551’s flammable aluminum hulls, led to a low crew survival rate. The twelfth ACR lost three Sheridans to mines during a river crossing on one occasion, while five vehicles of the eleventh ACR were obliterated by Viet Cong rocket-propelled grenades during the battle of Lam Son 719. Altogether, around one hundred M551s were lost in Vietnam, though some of these losses include breakdowns in the field. 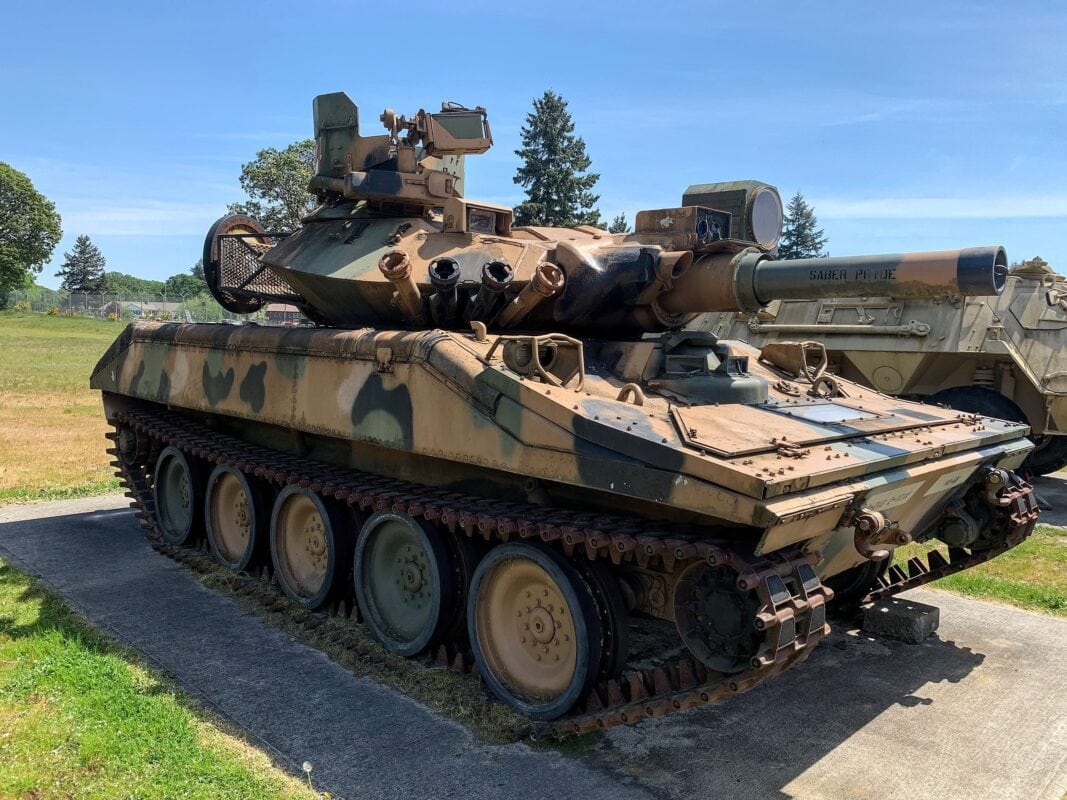 Though not deployed in Vietnam, the Shillelagh missile, too, proved to be a disappointment. It was plagued by numerous technical faults, and its infrared sensor could not lock onto targets closer than eight hundred meters. The Army adapted the M81/Shillelagh combination for the M60A2 “Starship” Patton tank, but found the system so troublesome that these were phased out after only a decade in service.

Nonetheless, the Sheridan was one of those unusual weapons that was reportedly well liked by the troops despite it being found wanting by senior officers. The 152-millimeter shells made a powerful impression in a firefight, and M625 canister rounds loaded with thousands of flechettes devastated Viet Cong infantry in engagements in Tay Ninh and Bien Hoa. The Sheridans’ low ground pressure also made them more capable of negotiating difficult terrain than the heavy Patton tanks they replaced, though they were not immune to bogging down under the swampy conditions in Vietnam. Grunts also field-modified Sheridans with gun shields for the pintle-mounted .50 caliber machine guns, and additional belly armor for protection against mines.

The Sheridan’s service in Vietnam ended with the withdrawal of the last Armored Cavalry Regiments in 1972, and the Army began phasing the complicated vehicles out of the cavalry units by the late 1970s. However, they remained in airborne formations for lack of a replacement, and were upgraded the M551A1 TTS model with an effective thermal sight for night combat.

In 1989, eight to ten Sheridans of the Third Battalion of the Seventy-Third Armored were used in the first and only parachute drop of U.S. tanks into combat by C-130 transports onto Torrijos/Tocumen Airfield. Four more M551s had already been secretly air landed into Panama before the commencement of hostilities, where they were used to breach the La Comandancia strongpoint with their heavy shells. Those dropped via the Low-Velocity Air Drop parachute system did run into difficulties, when two of the M551s landed a swamp where they could not be recovered. The remaining tanks were quickly brought into action to suppress Noriega’s dug-in troops in urban combat.

A year later, fifty-one Sheridans were scrambled into Saudi Arabia along with the rest of the Eighty-Second Airborne Division as part of Operation Desert Shield, reinforcing a “thin line in the sand” of American light infantry. It was hoped these would be sufficient to dissuade Saddam Hussein from invading Saudi Arabia with his massive armored formations. Fortunately, such a scenario did not come to pass, and the United States had months to deploy heavy armored formations to the theater.

Had the Sheridans been forced into battle, they would have been easy meat for Iraqi tank guns in the open desert. Still, some tank-killing armor was better than none, and the light tanks did see action in the Gulf War, firing around a half-dozen missiles at Iraqi bunkers and destroying a single Type 59 tank. These were the only Shillelaghs ever used in combat out of more than eighty-eight thousand built.

The Sheridan lasted several more years in U.S. service as part of the Eighty-Second Airborne’s rapid reaction force, but was ultimately retired in 1996. Many served on as dummy OPFOR tanks at the National Training Center, but these too were withdrawn by 2003 due to their intensive maintenance requirements, many ending their service as artificial reefs.

The Airborne branch never received a satisfactory replacement for the Sheridan tank. The Army first unsuccessfully attempted to fit the M551 with a light 105-millimeter gun, then experimented with a similarly armed XM8, before finally deploying the wheeled Stryker M1128 Mobile Gun System—but only in support of Stryker motorized infantry units.

Today, airborne troops are probably better served by modern antitank missiles such as the Javelin for antitank defense, rather than a light tank which virtually any form of antiarmor return fire could annihilate. On the other hand, light tanks would offer an effective infantry support weapon for blasting away at enemy strongpoints, while remaining immune to return fire from small arms and light support weapons. Modern active protection systems may also offer relatively lightweight protection from lighter antiarmor weapons.

The experience with the Sheridan shows that even with its troublesome armament and inadequate armor, troops in the field appreciated the Sheridan for being there where it was needed. The M1 Abrams tank is just as fast the Sheridan, vastly better armed and armored, and can even be carried by C-5 cargo planes—but its bridge-collapsing seventy-ton weight still severely limits where and how quickly it can be deployed, and imposes a formidable logistical burden in terms of fuel and maintenance. And you certainly can’t toss one out of a plane.