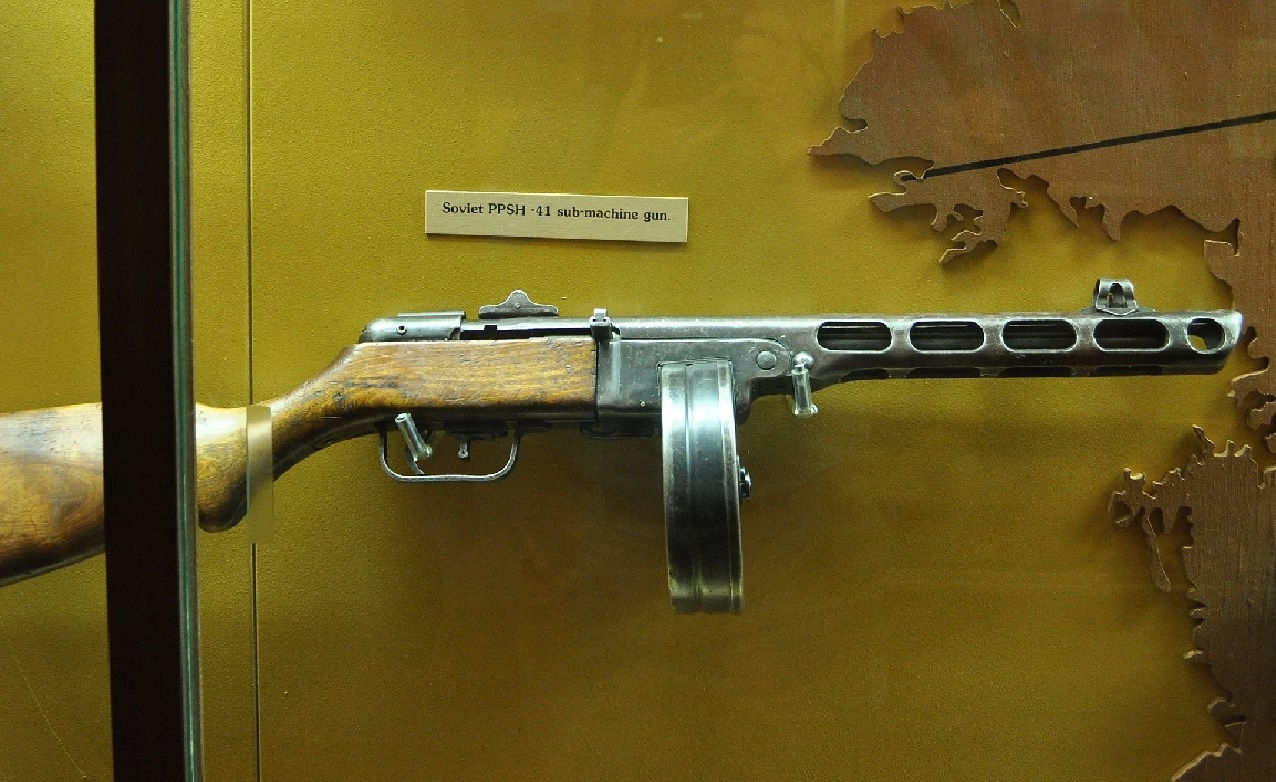 Russia’s PPSh-41 Submachine Gun: A 2 Minute Explainer – The PPSh-41 holds the distinction of the most-produced weapons of the Second World War.

Why It Was So Deadly

Cheap, light-weight, and when used with a drum magazine, had a huge, 70+ round capacity. The PPSh-41 was a logistical dream, optimized for mass production. Though the design was roughly based on the previous PPD-40, it was much simpler and required almost no time consuming and expensive milled parts, opting instead for cheaper and quicker metal stamped parts.

The relatively compact and light-weight weapon was chambered in the Soviet 7.62x25mm Tokarev pistol cartridge. This meant that gun could actually use the same barrel that the Mosin-Nagant used, as they were the same diameter. Gunsmiths could simply cut a Mosin-Nagant barrel in half, and have two PPSh-41 barrels. The firearm was designed with a compensator at the end of the barrel to help reduce muzzle climb during fully automatic fire. Although this did help accuracy somewhat, it came at the cost of significantly increased flash and noise.

One of the few negative aspects of the PPSh-41 was its large capacity drum magazine. Although the drum could in theory hold up to 71 rounds of ammunition, in practice it was loaded with less, around 60-65 rounds loaded to prevent feeding problems.

Also, the drum was rather heavy, and although it allowed a shooter to have a lower profile while in the prone shooting position, it didn’t provide a good grip surface for control during automatic fire.

Drums were also essentially one of a kind: PPSh-41s shipped with two drums that shared serial numbers with the submachine gun and were custom fitted to the gun. Failure to feed could sometimes happen when using PPSh-41 drums with other PPSh-41 submachine guns. The use of 35 round box magazines rectified this feed issue at the cost of lower capacity.

The PPSh-41 was favored not just by Red Army soldiers. Photographs from the war show a number of German troops equipped with PPSh-41s on the eastern front in some circumstances, perhaps due to more abundant Soviet ammunition stores.

Ultimately the PPSh-41 would be superseded by the even simpler PPS-43, though the PPSh-41 remained in service. Post-war, the Soviet Union sent many hundreds of thousands of PPSh-41s to their Communist allies around the globe, and the submachine gun saw service with the Chinese and North Koreans during the Korean War. Some PPSh-41 even made their way to Vietnam, where the North Vietnamese used it to great advantage.