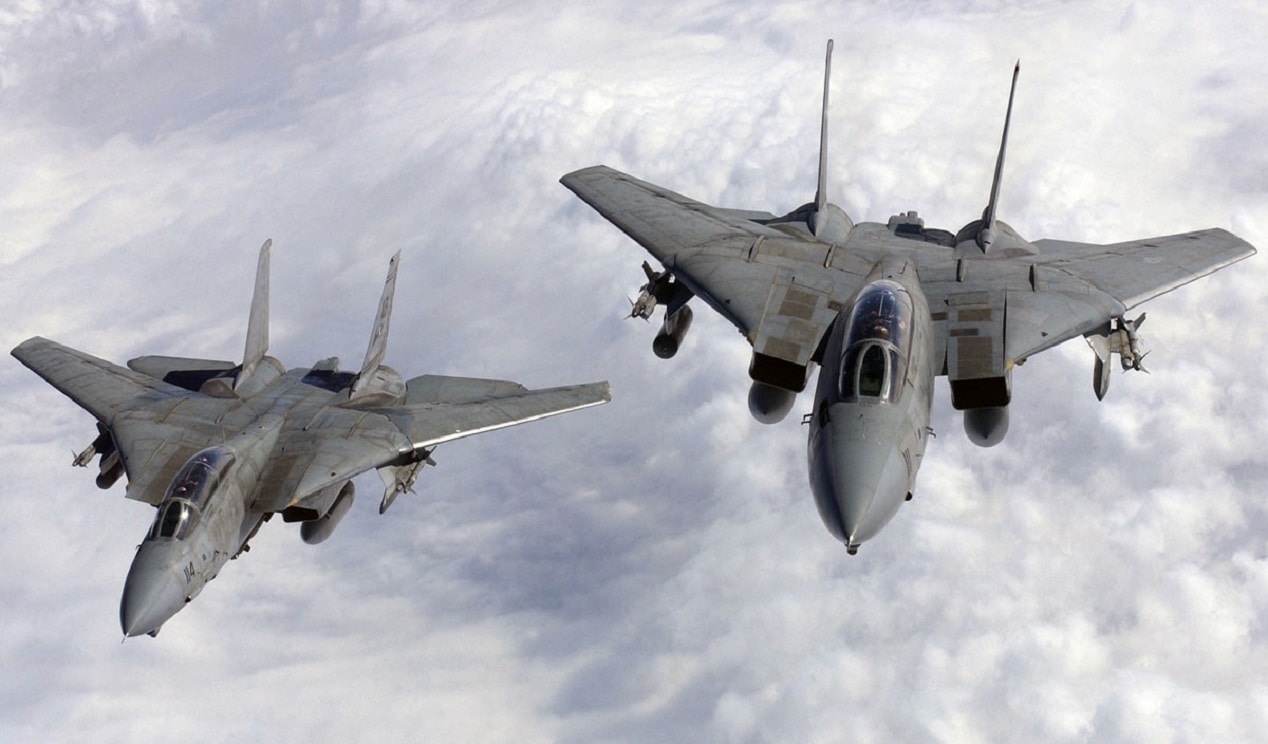 Super Tomcat 21, a 2 Minute History: The Grumman F-14 Tomcat is considered by many aviation enthusiasts as one of the most beloved jet fighters in military history.

A supersonic, twin-engine, two-seat, twin-tail, variable-sweep wing fighter aircraft, it was armed with a General Electric Vulcan M61A-1 20mm gun with nearly seven hundred rounds of ammunition and possessed eight hardpoints for carrying ordnance—four on the fuselage and two each side under the wings.

The plane also had the capability to carry short, medium, and long-range air-to-air missiles AIM-9, AIM-7 and AIM-54, and air-to-ground ordnance that included CBU cluster bombs.

“The F-14, with its AIM-54 Phoenix air-to-air missiles, coupled with airborne early-warning aircraft radar, was able to simultaneously intercept, engage and destroy up to six incoming enemy aircraft out to distances of one hundred miles from a carrier task force,” writes the Museum of Flight. “The F-14 was later used in the ground-attack role as well.”

These were surely incredible, next-generation fighter capabilities, but do take note that the U.S. military never got to see the plane’s highly regarded next iteration—the Super Tomcat 21. According to defense writer Tyler Rogoway at the War Zone, “if the Super Hornet hadn’t been built, Grumman’s next-gen Tomcat may have become a reality.”

To get a better visual on what the Super Tomcat 21 would have looked like, the War Zone looked to the expertise of aerospace artist Adam Burch from Hangar B Productions to forensically recreate the fighter.

“The Super Tomcat 21 would include a variety of enhancements over the F-14D and it could be produced via remanufacturing existing F-14 airframes or it could be ordered via a new-build arrangement. Most likely a combination of both options would have been used, just like the F-14D,” he notes.

“The ST21 would have incorporated a bunch of highly logical features that would accentuate the Tomcat’s attributes and mitigate its deficiencies. These were largely already available or relatively mature technologies. As a result, Grumman could start delivering ST21s as soon as the mid-1990s,” he continues.

Rogoway claims that “a host of other less prominent features would also be included.”

“In all, the ST21 would have been a mighty beast of a multi-role fighter. With drastically expanded fuel capacity, both internally and externally, its range and loiter time would have been increased quite dramatically. … The ST21 would have pushed the Tomcat into a new realm of air superiority fighter and fleet defender. … In fact, no other fighter in the world would have possessed similar long-range target detection and identification capabilities,” he concludes.