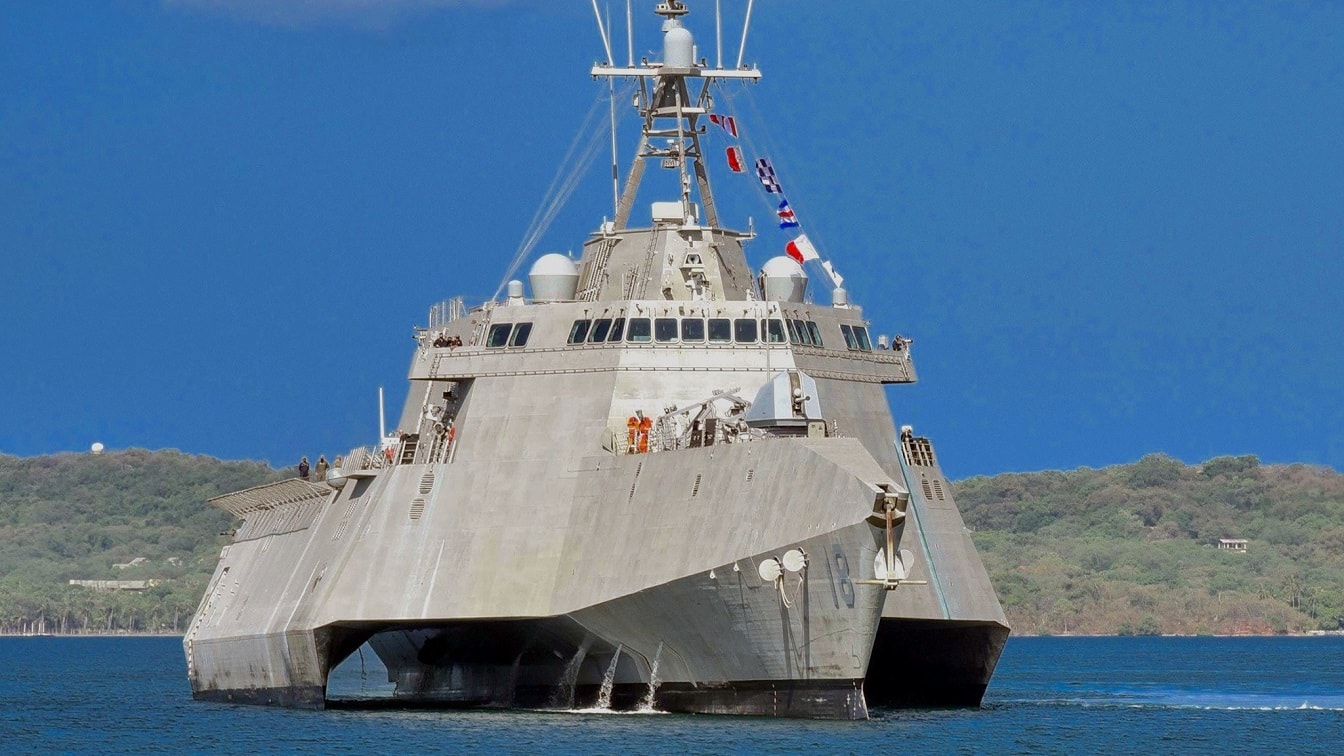 Thanks to the Marine Corps’ return to amphibious assault, there may yet be a use for the problem-plagued Littoral Combat Ship: The US Navy’s Littoral Combat Ship (LCS) program is a textbook example of merging many mission requirements and untried technologies onto new and untested platforms.

The LCSs, represented by the Independence-class and Freedom-class, were to be highly flexible, multi-mission platforms capable of conducting a variety of missions, including antimine operations, surface warfare, antisubmarine warfare, and irregular warfare operations.

The ships were to benefit from a stealthy design and, thanks to a new and novel propulsion system, of high-speed sprints of more than 44 knots. They were, however, plagued by problems. In addition to faulty engine gaskets, resulting in seawater ingress, several ships’ propulsion systems broke down, necessitating complicated and expensive repairs.

But, there may be a future for the LCS after all.

“We weren’t sure LCS was executing the missions it was designed for. And so we… went out to the number fleet commanders and said, ‘Alright, what do you want it to do? And what missions do you want it to execute based on the environment we’re in now?’” Vice Adm. Roy Kitchener, Commander of Naval Surface Forces, explained to reports during a media roundtable, Defense News reports.

One of the upgrades that could vastly improve the Navy’s Littoral Combat Ships offensive capability is the Naval Strike Missile (NSM), a potent Norwegian-designed anti-ship missile.

The munition has worked its way onto several Navy and Marine Corps platforms, notably in a containerized truck-mounted configuration as part of the USMC’s NMESIS anti-ship program. The missile benefits from advanced materials and a stealthily contoured nose section that affords the NSM a reduced radar cross-section.

Furthermore, the NSM can navigate around obstacles and fly in a sea-skim flight profile below ship radar. Range is nominally over 100 nautical miles, though it could increase in future NSM variants.

It seems some have seen the Littoral Combat Ship’s new lease on life with some apprehension. However, late last year, a research paper written by a group of Chinese defense researchers postulated that the Littoral Combat Ship could work well with other surface combatant ships, pointing to the LCS’s high degree of modularity and high speed. Furthermore, the researchers surmised that the LCS could be a powerful asset as the United States Navy shifts to a distributed but lethal force, particularly when armed with potent anti-ship weaponry like the Naval Strike Missile.

Most recently, the Navy has suggested the LCS could compliment the Marine Corps’ up-and-coming Light Amphibious Warship by providing escort protection to Marines and Sailors as they flit front island to island throughout the Indo-Pacific.

Despite the Littoral Combat Ship’s rather inauspicious debut, it seems the Navy may be getting a handle on the class’ repair and maintenance. This, coupled with a potent new ship-killing missile and a novel use as a Marine Corps escort, might breathe new life into the ship’s sails.

Caleb Larson is a multimedia journalist and defense writer. A graduate of UCLA, he also holds a Master of Public Policy and lives in Berlin. He covers the intersection of conflict, security, and technology, focusing on American foreign policy, European security, and German society for both print and radio. Follow him on Twitter @calebmlarson

In this article:LCS, Littoral Combat Ship, Navy, NotHome, US Marines, US Navy