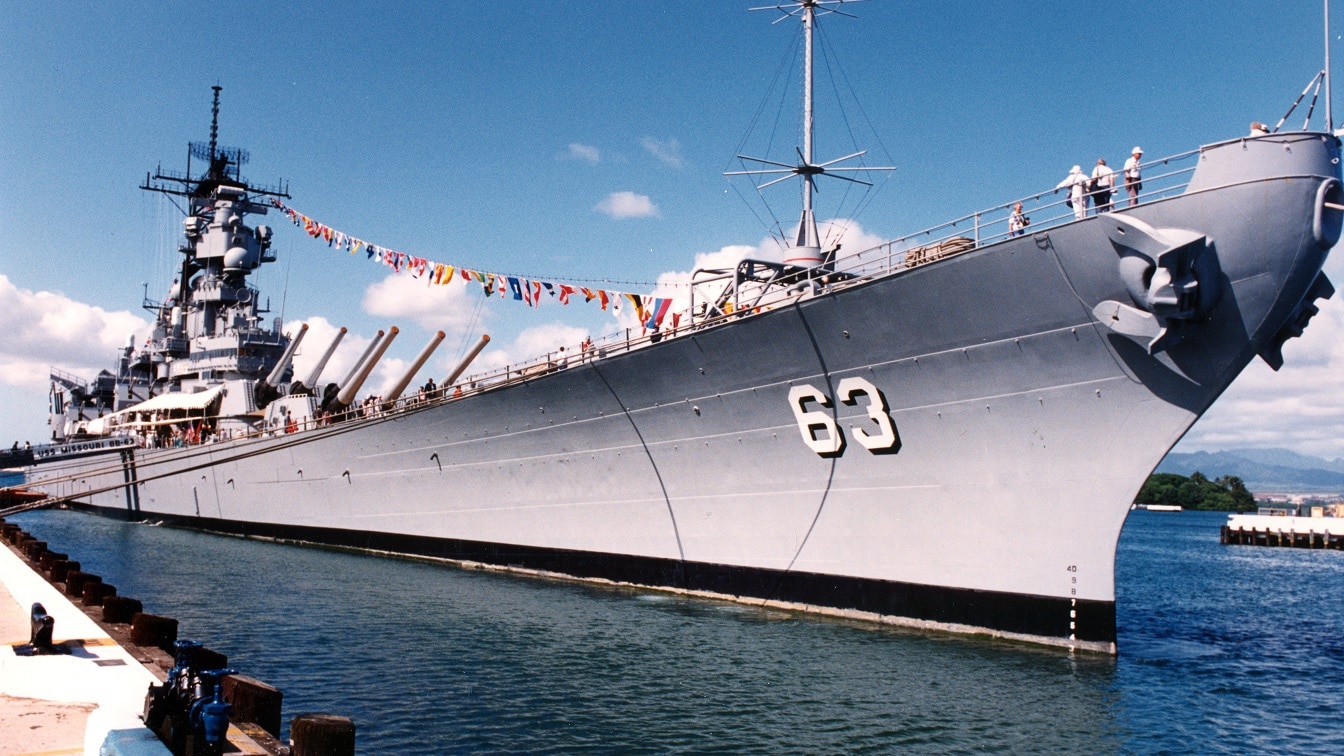 The battleship USS Missouri (BB-63) stands moored to a pier at Naval Station Pearl Harbor, Hawaii. Missouri is in Hawaii to take part in the observance of the 50th anniversary of the Japanese attack on Pearl Harbor.

Would the US Navy Ever Bring Back the Old Iowa-class Battleships? Here Is What One Expert Explained – Is it time to bring back the battleship? For decades, naval architects have concentrated on building ships that, by the standards of the World Wars, are remarkably brittle. These ships can deal punishment at much greater ranges than their early 20th century counterparts, but they can’t take a hit. Is it time to reconsider this strategy, and once again build protected ships? This article examines how these trends came about, and what might change in the future.

Why We Build Big Ships

The label “battleship” emerges from the older “ship of the line” formulation, in the sense that a navy’s largest ships participated in the “line of battle” formation that allowed them to bring their broadsides to bear on an opposing line. After the development of ironclad warships, the “battle ship” diverged from the armored cruiser based on expectations of usage; “battleships” were expected to fight enemy “battleships.” The modern battleship form settled around 1890, with the British Royal Sovereign class. These ships displaced about 15,000 tons, with two heavy guns each in turrets fore and aft, and steel armor. The rest of the navies of the world adopted these basic design parameters, which provided a ship that could both deal out and absorb punishment. The process of ensuring survivability was simplified, in these early battleships, by the predictability of the threat. The most likely vector of attack in the late 1890s came from large naval artillery carried by other ships, and consequently protective schemes could concentrate on that threat.

The limitations of fire control meant that lethality didn’t increase much with size; HMS Lord Nelson, laid down 15 years later, displaced only 2000 tons more.  On roughly the same size hull, however, HMS Dreadnought took advantage of a number of innovations developed in the ensuing years, and with ten heavy guns became a far more lethal platform at roughly similar cost to previous ships. As a consequence, the survivability of smaller battleships dropped substantially, even against naval artillery.

From that point on, lethality and survivability increased dramatically with ship size, and the navies of the world responded accordingly. By 1915 the first line battleships of the Royal Navy would displace 27,000 tons; by 1920 the world’s largest battleship (HMS Hood) displaced 45,000 tons.  In 1921 international agreements would constrain warship size, although the Germans and Japanese in particularly imagined battleships of staggering proportions.

Why the Big Ships Went Out of Style

With the advent of the age of airpower (and missile power), size no longer dramatically increased lethality for surface warships. At the same time, a proliferation of threats made ensuring survivability more difficult. The huge battleships of the Second World War could not survive concerted air and submarine attack, and could not punch back at sufficient range to justify their main armament. Except for aircraft carriers, where lethality still increased with size, naval architecture took a turn for the petite. The chief surface ships of the U.S. Navy (USN) today displace less than a quarter that of the battleships of World War II.

Post-WWII ships also, broadly speaking, discarded the idea of armor as a means of ensuring survivability. There remains considerable debate as to how traditional battleship belt (side) armor could resist cruise missiles. Cruise missiles generally have less penetrating power than the largest naval artillery, although they have other advantages. Deck armor proved a more serious problem, and the demands of ensuring survivability from bombs, pop-up cruise missiles, and (more recently) ballistic missiles quickly outpaced the improved lethality of a large, heavily armored ship.  And perhaps most importantly, no one figured out how to eliminate (as opposed to ameliorate) the problem of underwater attack; torpedoes continued to pose a lethal threat to even the most heavily armored of warships.

Which isn’t to say that people haven’t tried. Several navies have played with the idea of large surface warships since the end of World War II. The Royal Navy considered redesigning and completing at least one member of the Lion class, abandoned in 1939. Studies eventually determined that the level of deck armor necessary to protect the ships from bombs would prove prohibitive. The Soviets maintained plans to build traditional gun-toting battleships into the 1950s, when the death of Stalin ended such a fantasy. France completed Jean Bart in 1952, and kept her in partial commission into the 1960s as a training and accommodation ship.

A new wave began in the 1970s, when the Soviet Union started construction on the Kirov class heavy missile cruisers, which quickly took on the name “battlecruisers.” The USN responded, in part, with the refurbishment of the four Iowa class battleships, which acquired long range missiles but remained in service for only a few years.

More recently, Russia, the United States, and China have all considered the construction of large surface warships.  The Russians periodically promise to build new Kirovs, a claim to take as seriously as the suggestion that Russia will build new Tu-160 strategic bombers.  One of the proposals for the CG(X) program involved a nuclear powered warship approaching 25,000 tons. The media has treated the Chinese Type 055 cruisers as a similar super-warship, but reports now indicate that the ship will displace around 12000-14000 tons, somewhat smaller than the US Zumwalt class destroyer.

Big ships still have some lethality advantages.  For example, bigger ships can carry larger magazines of missiles, which they can use for both offensive and defensive purposes.  Advances in gun technology (such as the 155mm Advanced Gun System to be mounted on the Zumwalt class destroyer) mean that large naval artillery can strike farther and more accurately than ever before.

But the most important advances may come in survivability. The biggest reason to build big ships may be the promise of electricity generation. The most interesting innovations in naval technology involve sensors, unmanned technology, lasers, and railguns, most of which are power intensive. Larger ships can generate more power, increasing not only their lethality (rail guns, sensors) but also their survivability (anti-missile lasers, defensive sensor technologies, close-defense systems). The missile magazines that large ships can carry allow them to draw together these elements and lethality and survivability better than their smaller counterparts.

What about a true successor to the classic battleship, designed to both deal out and absorb punishment?  Advances in materials design have certainly increased the ability of other military systems (most notably the tank) to survive punishment, and a serious effort to create an armored ship would undoubtedly result in a well-protected vessel. The problem is that passive systems need to protect a ship from a wide range of different attacks, including cruise missiles, torpedoes, ballistic missiles, and long-range guns. Keeping a ship well-protected from these threats, all of which it could anticipate facing in an anti-access/area-denial (A2/AD) situation, would likely prove cost-prohibitive. It’s also worth noticing that while the battleships of yore could continue to sail and fight despite heavy damage to their various components, modern warship carry far more sensitive, deeply integrated technology, systems that might react poorly to otherwise-survivable ballistic missile strikes.

Big ships with heavy armor are unlikely to solve the A2/AD dilemma.  However, big ships with effective systems of defense components, combined with a large number of extremely lethal offensive systems, can go a long way toward defeating a system of anti-access systems. In this sense, the “battleship” could return, although it will play a role more like a classic monitor (intended to fight against shore-based systems) than a line-of-battle-ship. And these new “battleships” will survive less because of their ability to absorb hits, than to avoid hits altogether.

Robert Farley is a Senior Lecturer at the Patterson School at the University of Kentucky. He is the author of the Battleship Book.