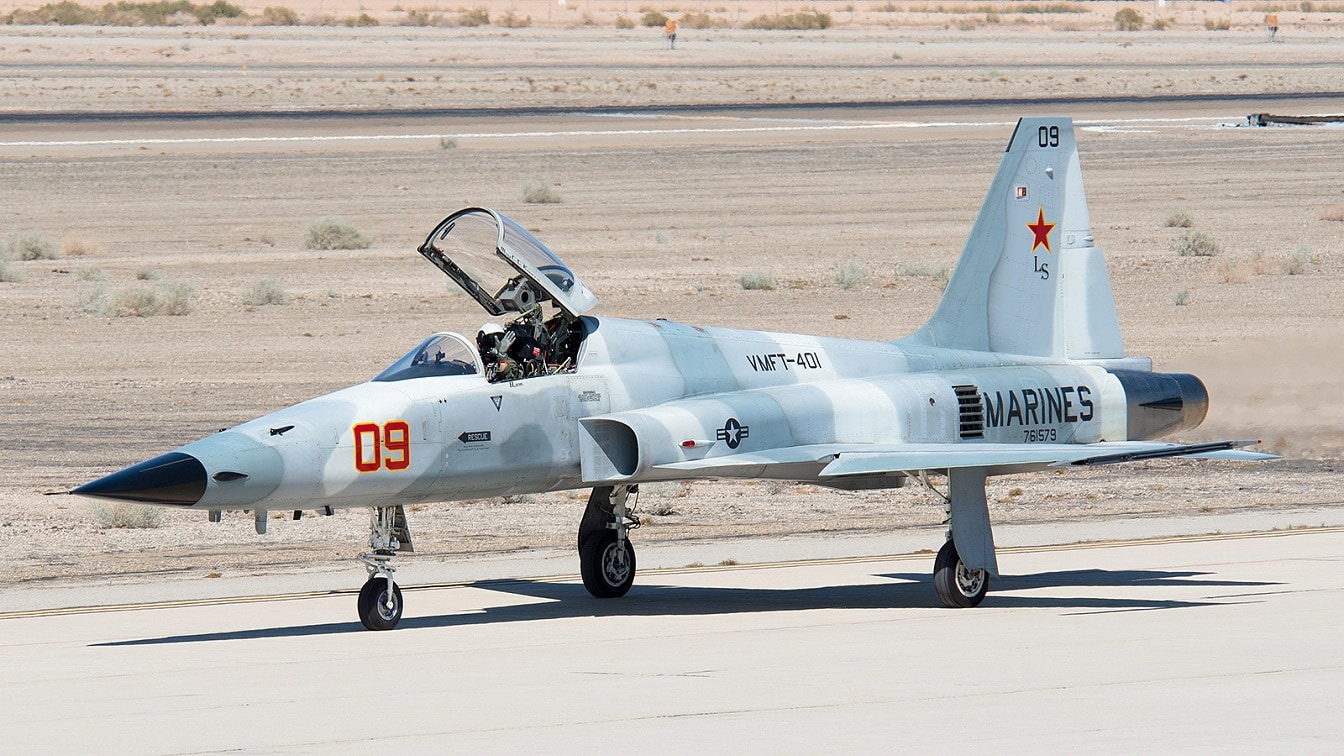 MiG-28 or What Is Really an F-5. Image Credit: Creative Commons.

MiG-28: Russia’s Deadly Fighter in Top Gun was a US F-5 Fighter – With the long-awaited “Top Gun” sequel now delayed until the world is finished contending with the coronavirus, we’re left with no alternative but to revisit the 1986 classic for the millionth time, and as may come as no surprise to you, it still holds up. The story of Pete “Maverick” Mitchel has all the hallmarks of a modern blockbuster: fantastic action sequences, cheesy moments that make you smile despite yourself, and of course, topless volleyball.

There are, however, a few burning questions that set in as you watch Tom Cruise’s Maverick demonstrate very clearly that he should be immediately pulled from flight duty for the umpteenth time. The first is… Just who exactly are they fighting? The movie never clearly indicates whether the enemy fighters are Russian, Chinese, North Korean, or otherwise. As Brad Howard at Task & Purpose points out, even the red star on the tail of the enemy fighters doesn’t quite match any national Air Force… but it does match the color scheme utilized by the VFC-13 Aggressor Squadron. In other words, the terrifying enemy fighters may have been rocking aggressor colors because that’s exactly the role they fill in real life, just as they do in the movies.

With that mystery effectively solved, the next one to creep into your mind is… Wait a minute, are MiG-28s real?

When I was a kid, I knew the names of a handful of fighter jets, but practically nothing of the Mikoyan MiG production line. At the time, those little black MiG-28s just looked more acrobatic than the larger F-14 Tomcat, really emphasizing the idea in my mind that American pilots needed to be better than the competition in order to come out on top. It didn’t occur to me that Paramount Pictures probably didn’t get the Kremlin’s permission to borrow a few of their intercept fighters for what could arguably be called an American propaganda film.

The truth is, the MiG-28 that Maverick and Goose can’t tell you about (it’s classified) is not a real aircraft at all… it was made up specifically for the purposes of the movie.

Okay, so that’s not technically true: The aircraft you see depicted at the MiG-28 in “Top Gun” is a real aircraft, it’s just not a MiG. Heck, it’s not even Russian. It’s actually another fighter in the U.S. arsenal called the Northrop F-5 Tiger

The MiG-28 is supposed to be a twin-engine fighter that’s slightly slower than the F-14 Tomcat but considered to be far more maneuverable. In that regard, these fake MiGs are probably intended to stand in for the very real and similarly twin-engine Soviet MiG-29, which is indeed a bit slower than the F-14, but boasts a better thrust-to-weight ratio and is seen as more acrobatic. In video games based on the movie, the fictional MiG-28 is actually replaced by the real Mig-29, seemingly confirming its role as a stand in for the real jet.

On-screen, the small Northrop F-5 just looks more nimble than the larger F-14s, and with good reason. The F-5 measures up at just over 48 feet long, eight feet shorter than a real MiG-29, and more than 14 feet shorter than the F-14 Tomcat. Wingspan tells a similar story, with the F-5 (MiG-28) coming in at just under 27 feet, the MiG-29 at more than 37 feet, and the swing-wing F-14 measuring more than 64 feet. The decision to use the F-5 as a stand-in as the fictional MiG-28 definitely does the premise justice, making the MiG-28 and F-14 feel like two fighters with very different strengths on screen.

The F-5 may fit the aesthetic bill of a smaller and more maneuverable fighter, but when compared to its real-life counterpart in the MiG-29, the F-5 doesn’t quite keep pace. The MiG-29’s top speed is Mach 2.5, whereas the designer imposter F-5 can only reach a still respectable Mach 1.63. The Mi-29 can also cover far more ground, with a range of 890 miles compared to the F-5’s 554.

In terms of armament, the real MiG-29 isn’t that far off from its fictional cousin. The F-5 boasts the same number of hardpoints (seven) and carries, among other weapons, the AIM-9 Sidewinder missile for air-to-air engagements. According to the movie, the MiG-28 carries Vympel K-13 (NATO reporting name “AA-2 Atoll”) missiles, which are real Soviet missiles developed by reverse-engineering the America’s Sidewinder. Instead of a single 30mm cannon, however, the F-5/MiG-28 utilizes two 20mm M39A2 Revolver cannons.

It wasn’t just filmmakers who saw the Northrop F-5 as a worthy stand-in for Soviet aircraft. Throughout the 1970s and 80s, F-5s served in multiple aggressor squadrons, including the 64th and 65th aggressor squadrons out of Nellis Air Force Base in Nevada. Although, it’s worth noting that the F-5 was chosen not because of its similarities to the MiG-29, but rather because it was seen as a suitable stand-in for the older MiG-21. The U.S. Navy and Marine Corps also both operated the F-5 at one point or another.