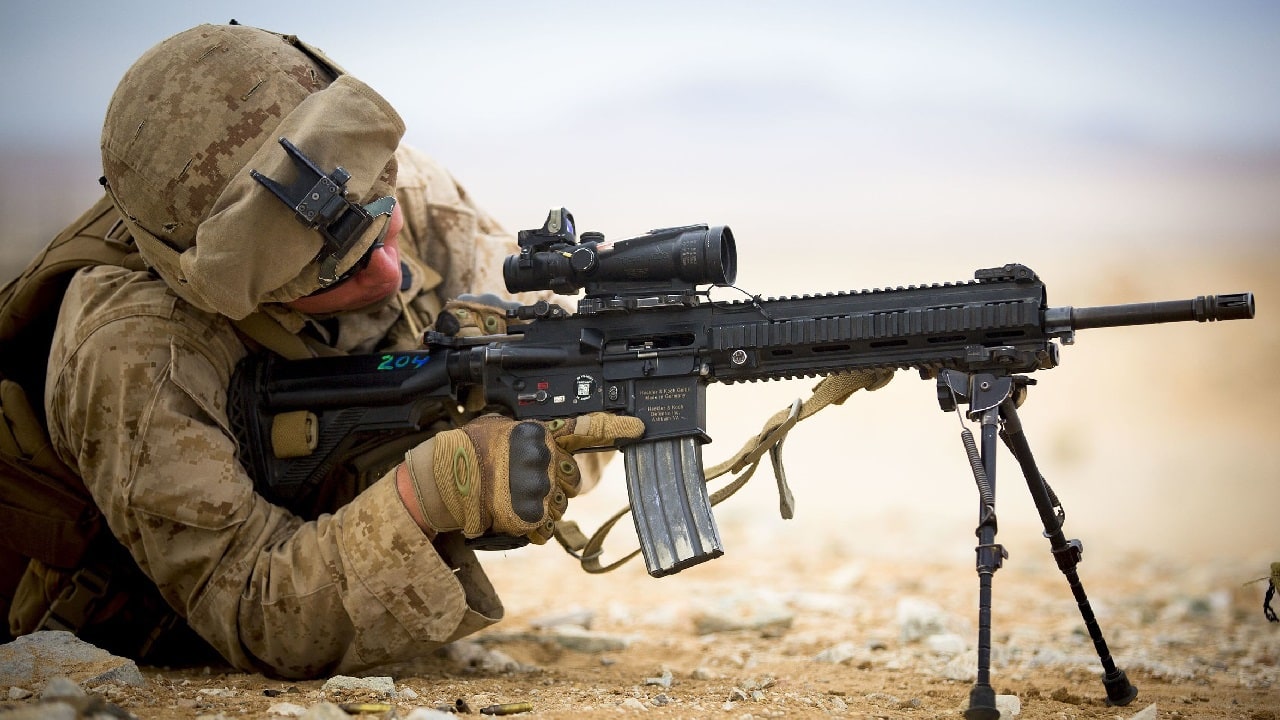 M27: The rifle that changes everything for the US Marines – Historically, the Marines have been known for getting old, broken down, and just plain not great equipment as standard-issue. More recently, however, the Marine Corps has gone all-in on more modern weaponry, opting to replace the venerable M16 rifle and M4 carbine with the new M27 Infantry Automatic Rifle.

The IAR is a German design, made by Heckler & Koch, with a barrel length that falls in between the M4’s 14.5-inch barrel and the M16’s 20-inch barrel. Thanks in part to a redesigned action and free-floating barrel, the M27 not only boasts better accuracy than its two predecessors, but also has a farther effective firing range as well — it’s also the same rifle that was used to shoot Osama bin Laden.

In addition to the new rifle, the Marine Corps has also widely issued effective flow-through suppressors that serve to both mask Marine’s location as well as improve communication at the squad level.

And to take full advantage of the greater range afforded by the M27 IAR, the Marine Corps is also issuing a new optic, made by Trijicon. On their company website, Trijicon described the features of the Marine’s new Squad Common Optic:

“Specifically designed for Close Quarter Battle and long-distance marksmanship, the Trijicon VCOG 1-8×28 is forged from a nearly indestructible 7075-T6 aluminum housing and is waterproof to 66 feet. The first focal plane reticle allows subtensions and drops to remain true at any magnification. Featuring ruggedized electronics, the VCOG includes eleven user-selectable brightness settings, including two-night vision settings. An integrated dial fin allows easy rotation through the magnification range, and a near-constant eye relief means no head or stock position adjustments are needed. An integrated mounting adapter eliminates the need for conventional ring mounts, allowing users to quickly and easily mount the VCOG to any rail system.”

Prior to the new Squad Common Optic, the Marine Corps issued the Advanced Combat Optical Gunsight, or ACOG (known as the Rifle Combat Optic by the Corps) also manufactured by Trijicon. Unlike the New SCO, the older RCO provided magnification up to 6x, which was not variable. With the new optic, Marines can adjust the magnification level on the fly, improving target acquisition and lowering engagement time.

The Marines who tested the optic apparently gave it rave reviews, saying “Being able to shoot farther, identify targets at greater ranges and be more accurate will make them [Marines] more lethal,” said a Marine infantry weapons officer. “Marines have expressed excitement over this capability.”

The mantra “every Marine a Rifleman” remains true. And, with newer and more lethal equipment, isn’t likely to change anytime soon.