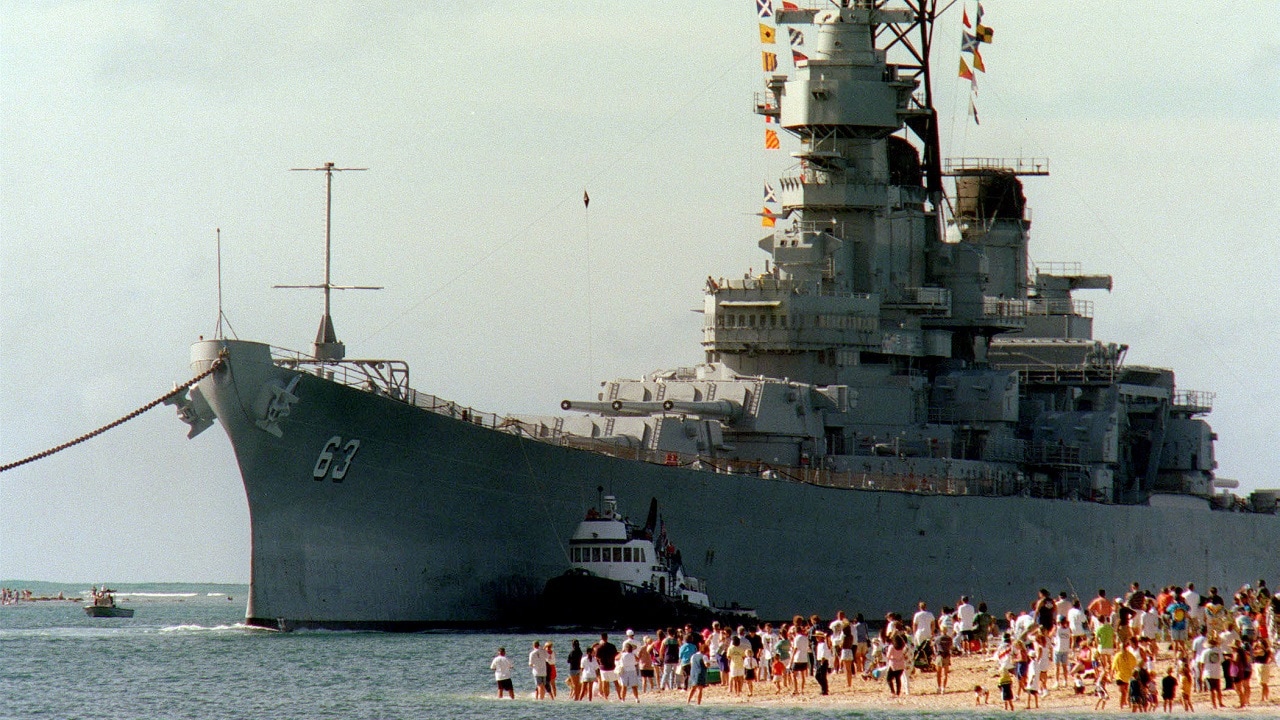 People gather on the beach to see the battleship USS Missouri (BB 63) enter the channel into Pearl Harbor, Hawaii, on June 22, 1998. Secretary of the Navy John H. Dalton signed the Donation Agreement on May 4th, allowing Missouri to be used as a museum near the Arizona Memorial. The ship was towed from Bremerton, Wash. DoD photo by Petty Officer 1st Class David Weideman, U.S. Navy.

From Tokyo Bay to the Persian Gulf – USS Missouri Was There – The United States of America officially may have entered the Second World War when President Franklin Roosevelt addressed the United States Congress on December 8, 1941, and asked for a declaration of war on the Empire of Japan – yet it had really begun at 6:45 am local time in Pearl Harbor on December 7 when the first shots were fired by the USS Ward at a Japanese submarine. For most of the sailors in Pearl Harbor, the war began when the Japanese began their bombardment at 7:40 am.

The primary targets for the Japanese were the battleships – as the U.S. Navy’s aircraft carriers were not in port.

It was thus fitting that it was aboard the deck of the USS Missouri (BB-63) on September 2, 1945, that the Empire of Japan officially surrendered and ended World War II.

For her efforts during the conflict, the Iowa -class battleship earned three battle stars. She would go on to earn five more battle stars for the Korean War, as well as two Combat Action Ribbons and many other commendations and medals for service in the Gulf War.

At over 58,000 tons and just under 900 feet in length, Missouri was among the largest warships ever built, and she was the last American battleship to be constructed as well as the final one to be decommissioned.

BB-63 was laid down in January 1941 when the clouds of war were on the horizon. The U.S. Navy sought to have a new class of battleships that improved upon the earlier South Dakota -class. Designed as “fast battleships” powered by larger engines, but also larger-caliber guns that offered a far greater range, these warships could travel with a carrier force and keep pace, being able to reach upwards of thirty-three knots. In addition, the Iowa-class size was developed to be able to travel through the Panama Canal, which enabled the warships to respond to threats around the world.

Missouri was actually the third ship to be named for the “Show Me State” – with the first being a sidewheel frigate launched in 1841. She was only in service for two years, as she was destroyed in a fire in August 1843. The second USS Missouri (BB-11) was a Maine-class battleship in service from 1900 to 1922.

Today, there is another USS Missouri (SSN-780), a Virginia-class submarine commissioned in 2010.

She was the final battleship to be commissioned by the United States Navy. Nicknamed “The Mighty Mo,” she was christened by then Sen. Harry S. Truman’s (D-Missouri) daughter, Margaret Truman.

In late August 1945, she sailed victoriously into Tokyo Bay to begin the process of demilitarizing Japan, and was then selected to host the surrender ceremony.

Unlike the other Iowa­-class battleships, USS Missouri was not decommissioned following the end of the Second World War. Instead, she was sent to the Mediterranean Sea in 1946 as a show of force against Soviet aggression and four years later took part in the U.S.-led United Nations efforts during the Korean War.

USS Missouri served as the flagship of Vice Admiral A.D. Struble’s 7th Fleet, and took part in bombardments of Communist positions at Chonjin, Tanchon, and Wonsan. During the war, her three sisters were also reactivated and provided naval gunfire support. While the range of the 16-inch guns was limited to just twenty miles, the warships operated on both coasts and that put a quarter of the Korean peninsula within range.

USS Missouri was decommissioned in February 1955, and she served as a museum ship at Bremerton, west of Seattle. That could have been the end of the story, but in the 1980s, after President Ronald Reagan called for a 600-ship U.S. Navy, all four of the Iowa-class battleships were reactivated and upgraded with new combat systems that replaced the many of the ships’ smaller five-inch guns with launcher for Harpoon anti-ship missiles, thirty-two Tomahawk cruise missiles and four Phalanx close-in weapon systems (CIWS).

The threat from the Soviet Union never came, yet she remained in service in the early post-Cold War era. In the early 1990s, the U.S. battleships took part in their final combat operations. Along with her sister ship USS Wisconsin (BB-64), the USS Missouri was deployed to the Persian Gulf during Operation Desert Storm and launched Tomahawk missiles at Iraqi targets.

The naval fire missions were conducted to convince the Iraqi Army that the coalition forces would engage in an amphibious assault, tying up thousands of Iraqi units in Kuwait. During the campaign, Mighty Mo fired at least twenty-eight cruise missiles as well as hundreds of 16-inch rounds on Iraqi targets. It marked the last time that any true battleship would fire her guns in anger.

Less than two years later in 1992, Missouri took part in a “voyage to remembrance” to mark the 50th anniversary of the Pearl Harbor attacks. During that ceremony, Missouri hosted President George H.W. Bush, the first such presidential visit for the battleship since Harry Truman boarded her on September 1947.

The same year, the “age of the battleship” came to an end, and all four of the United States Navy’s largest vessels ever built were converted to museum ships. In the case of the USS Missouri, it was almost a dream retirement at Pearl Harbor, Hawaii – fitting as she was located where America’s entry into World War II had begun and yet was the vessel on which it ended.