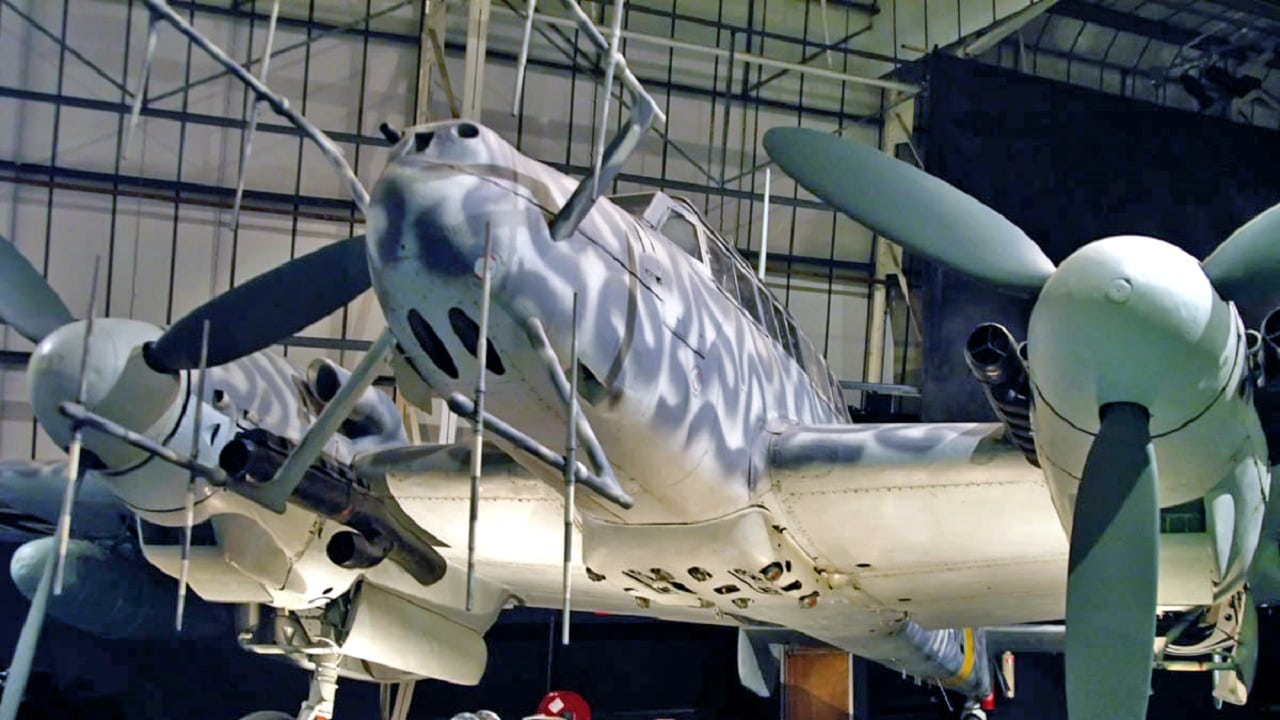 A Bf 110G-4 Night fighter at the RAF Museum in London. The antennas on the nose are of a FuG 220 Lichtenstein SN-2 radar set (ITU-classificatio: Radiolocation land station in the radiolocation service). Clearly visible are the openings for two 20mm cannons in the lower nose and two 30 mm cannons in the upper nose.

The Messerschmitt Bf 110 was not the best or the worst of the combat aircraft to see service during the Second World War. It had been one of the German Luftwaffe’s great hopes at the start of the war, as it was fast and heavily armed – so much so that it appeared almost invincible during the Blitzkrieg campaigns.

Yet the twin-engine Zerstörer (destroyer/heavy fighter) proved hopelessly vulnerable to single-engine fighter opposition during the Battle of Britain, and suffered significant losses. As the war went on, it was employed in other roles for which it was better suited.

Development of the aircraft had begun in the mid-1930s as part of the German rearmament program and military buildup. The prototype Messerschmitt Bf 110 V1 first flew from Augsburg-Haunstetten on May 12, 1936, with noted German test pilot Rudolf Opitz at the controls. Only four of the pre-production aircraft were built and their design was seen as very advanced for the day.

Officially introduced in service with the Luftwaffe in 1937, the Bf 110 saw consistent service over all the fronts of the Second World War. Total production reached 6,170 aircraft by the end of the war. It had the support of the Nazi leadership and Hermann Göring was a proponent of the Bf 110, believing its heavy armament, speed, and range would make the Bf 110 the Luftwaffe’s premier offensive fighter.

During the invasions of Poland, the Low Countries and France, the Bf 110 operated with great success, and the aircraft of Zerstörergeschwader 2 (ZG 2­2nd Destroyer Wing) were used to carry out attacks on enemy airfields with near impunity. However, the weaknesses of the aircraft became apparent during the Battle of Britain when it proved outclassed by the Royal Air Force’s Hawker Hurricane and Supermarine Spitfires.

Even with a backseat gunner – armed with either single or twin 7.92mm machine guns – the Bf 110 was unable to cope with faster single-engine fighters, notably the Hurricanes and North American P-51D Mustangs.  As it became less effective in daytime operations as the war continued, the Bf 110 was pressed into other roles that better suited its strengths.

As a radar-equipped night interceptor, facing only bombers, the Bf 110 again proved capable of wreaking immense destruction. Yet, by the end of the Second World War, the Bf 100 was again outclassed by more advanced aircraft.

One Bf 110 was used by Rudolf Hess to make his eventful flight to Scotland on the night of May 10, 1941. Part of the fuselage of that aircraft is now in the collection of the Imperial War Museum.

A total of 6,170 Bf 110s were produced in all variants. In addition to serving in the German Luftwaffe, the aircraft was also employed by the Italian Regia Aeronautica, the Hungarian Air Force and the Romanian Air Force.

Today, only two intact Bf 110s are known to survive. Those include the Messerschmitt Bf 110 G Werk Nr. 730301, which is now on display at the Royal Air Force in Hendon, North London. It was one of five Bf 110s taken by the British at the end of the war technical evaluation. The other is at the Deutsches Technikmuseum Berlin, and it was only recovered from a lake in Sweden – where it made an emergency landing in the winter of 1943.