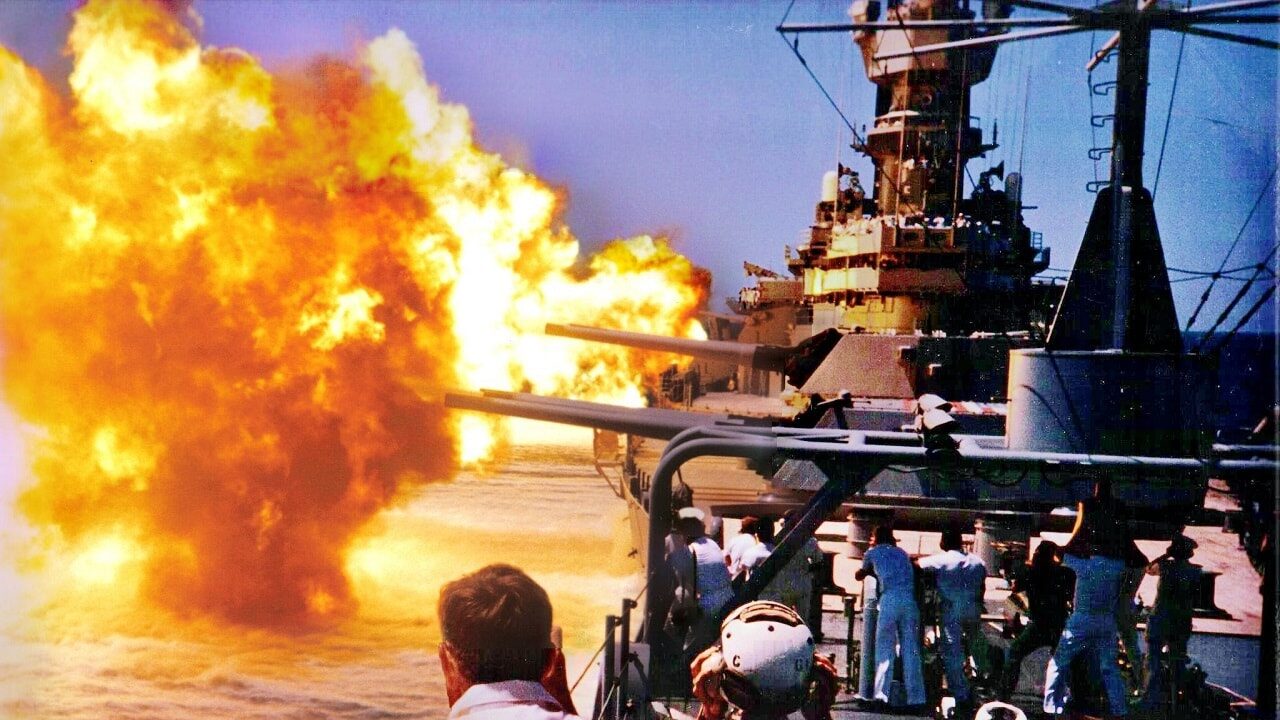 While not as big as Japan’s Yamato-class, many would argue that the Iowa-class is the best battleship class of all time. Is that true? The Second World War marked the end of the Age of Battleships. Aircraft carriers, with their flexible, long-range striking power made battlewagons obsolete in a matter of months. American battleships, once expected to fight a decisive battle in the Pacific that would halt the Japanese Empire, were instead relegated to providing artillery support for island-hopping campaigns. Yet after the war, America’s battleships would return, again and again, to do the one thing only battleships could do: bring the biggest guns around to bear on the enemy.

The U.S. Navy ended World War II with twenty-three battleships of all types. By 1947, the Navy had shrunk to peacetime levels that preserved half of the number of wartime aircraft carriers but cut the number of battleships on active duty to just four. Of the four remaining ships, all were members of the latest—and last—run of battleships, the Iowa class: Iowa, New Jersey, Missouri, and Wisconsin. By the outbreak of the Korean War in June 1950, only one battleship, Missouri, remained on active duty.

On June 25, 1950, the forces of the Democratic People’s Republic of Korea, backed by the Soviet Union, invaded pro-American South Korea. The invasion triggered an intervention by the United States, and USS Missouri was sent to provide support for American forces. Although Missouri did not directly participate in the amphibious landing at Inchon, it did support the landing by bombarding nearby Samcheok, South Korea, in order to convince North Korean forces the invasion would take place there instead. Afterwards, Missouri traveled to the port of Busan, where it became the flagship of Vice Adm. A. D. Struble, Commander, Seventh Fleet.

Missouri continued to support the UN offensive into North Korea along the peninsula’s east coast, conducting bombardment missions in late October 1950 in the Chongjin, Tanchon and Wonsan areas. Afterwards, it used its vast number of antiaircraft guns, consisting of twenty-five-inch guns, eighty forty-millimeter guns and forty-nine twenty-millimeter guns, to protect U.S. carriers from air attack. In December, after the Chinese entry into the war, Missouri provided naval gunfire cover for the U.S. Army’s X Corps, which, along with the First Marine Division, was evacuated by sea from Hunguam.

The Chinese intervention, and the realization that the Korean conflict would not be a short war, prompted the Navy to reactivate the remaining three Iowa-class battleships. New Jersey was activated on November 21, 1950; Wisconsin on March 3, 1950; and Iowa itself was reactivated on August 25, 1951. For the remainder of the war, the four battleships served in the naval gunfire support role, providing direct artillery support for ground troops, bombardment of specific enemy targets, and harassment and interdiction fire against enemy supply lines. Although the range of their sixteen-inch guns limited the battleships to targets within twenty miles of the Korean coastline, operating from both coasts that still put a quarter of the country under their guns.

The Korean War ended in 1953, but the U.S. Navy, fearing a return to hostilities, did not immediately send its battleships back to mothballs. Missouri was decommissioned in 1955, followed by New Jersey in 1957, and finally Ohio and Wisconsin in 1958.

In 1967, faced with rising tactical aircraft losses in the Vietnam War, the United States recommissioned USS New Jersey to provide firepower that didn’t risk losing pilots. By September 30, 1968, New Jersey was back in action, shelling North Vietnamese Army forces near the North/South Vietnam Demilitarized Zone. The battleship shelled coastal targets located by spotter aircraft from the aircraft carrier USS America, and supported the First and Third Marine Divisions. New Jersey’s Vietnam service would prove short, however, as the ship was decommissioned again the following year.

The 1980 election of President Ronald Reagan, who had run on the promise of a six-hundred-ship U.S. Navy, proved an opportunity to reactivate the four Iowa-class battleships yet again. All four Iowa-class battleships were upgraded with new combat systems, deleting many of the smaller five-inch guns, in order to accommodate sixteen Harpoon antiship missiles, thirty-two Tomahawk cruise missiles, and four Phalanx CIWS close-in weapon systems. Each ship retained its nine sixteen-inch guns—the new, modern Navy had no naval guns over five inches in diameter, and the big guns of the battleships would prove invaluable in the event of an amphibious landing.

The first ship to be reactivated—for the third time—was New Jersey. Returned to service in December 1982, within nine months it was back in action, supporting U.S. Marines acting as peacekeepers in Beirut, Lebanon. The 1983 bombing of the Marine barracks in Beirut killed 241 peacekeepers. In retaliation New Jersey conducted two naval fire missions against Druze and Syrian forces in the region believed responsible for the attack. In 1987, Missouri and Iowa participated in Operation Earnest Will, the escorting of reflagged Kuwaiti tankers to protect them from Iranian attacks.

The battleships also conducted Cold War–oriented missions. In 1986, New Jersey became the first American battleship to enter the Sea of Okhotsk, considered the Soviet Union’s backyard and a bastion for the Soviet Navy’s ballistic-missile submarines.

By the late 1980s the Soviet Union was visibly on the decline, and starting in 1989 the Navy made plans to retire the battleships yet again. On August 2, 1990, Saddam Hussein invaded and occupied Kuwait, and in response a massive American sea, air and land force was sent to defend Saudi Arabia. While Iowa and New Jersey were in the process of being decommissioned, Missouri and Wisconsin were deployed to the Persian Gulf. During Operation Desert Storm, the campaign to liberate Kuwait, both battleships fired Tomahawk missiles at Iraqi targets and bombarded Iraqi ground forces. As the Missouri did during the Korean War, both battlewagons conducted naval fire missions to convince Iraqi forces an amphibious assault was imminent, tying up thousands of Iraqi Army forces that were forced to defend the coastline.

By 1992, all four battleships were again deactivated, and today they are museum ships in Hawaii, California, Virginia and New Jersey. Although there are frequent calls to return them to service, that seems unlikely: although their big guns are still useful, the ships require nearly two thousand crew each, making them expensive to operate. While theoretically possible to modernize and automate them, no serious study has been performed in how to adopt them to modern warfare. The four legendary ships Iowa, New Jersey, Missouri and Wisconsin will likely remain museums as long as they are afloat.