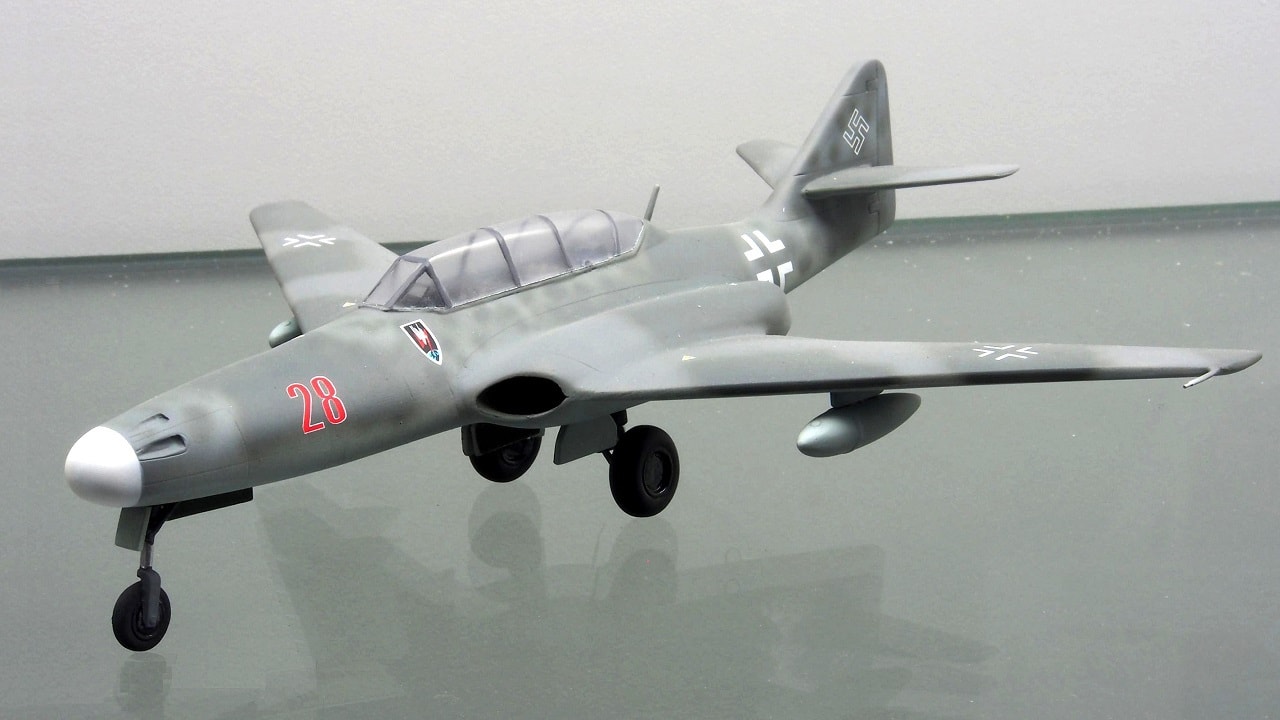 Scale model of one of the Me 262 HG III versions at the Technikmuseum Speyer.

The Me 262 – the World’s First Operational Jet-Powered Fighter – Design work on the Messerschmitt Me 262 began before the outbreak of the Second World War, but due to problems with the engine design, metallurgy issues and top-level interference-led to delays. As a result, the aircraft didn’t reach operational status with the Luftwaffe until mid-1944, yet even then it proved to be the world’s first operational jet-powered fighter aircraft.

Upon inspection after the war, it was acknowledged by many aviation experts that the designs of the airframe and engine of the Me 262 were years ahead of other aircraft of the era. Its secrets permitted the Allies as well as the Soviets to accelerate the development of jet fighters early in the Cold War.

The M262 V3 made its debut flight on jet power on July 18, 1942. Production was slow to begin however, but between March 1944 and April 1945, the Luftwaffe received 1,433 Me 262s in various configurations. In all versions, the cockpit offered the pilot a superb all-round view as it was located high on the fuselage under a blown clear-view canopy.

The aircraft was initially power by two Junkers Jumo 004B axial-flow turbojets, each with a rate at 1,984 pounds (900 kg) static thrust. With an operation life of only 25 hours before rebuild, the engines were often in short supply.

At full speed and altitude – which was 540 mph (870 km/h) and 37,500 feet (11,450 meters) – nothing could catch the Me 262. However, it was clumsy at low speeds and was even vulnerable while landing and taking off. Many of the jets were even shot down by Allied fighters patrolling the Me 262 for returning jets.

The Me 262 was designed to be armed with four 30mm Rheinmetal-Borsig Mk 108A-3 cannons with 100 rounds per gun for the upper pair and 80 rounds for the lower guns. The guns were aimed with a Revi 16B gunsight or Askania EZ42 gyro-stabilized sight. The aircraft also had provision for twelve R4M air-to-air rocket projectiles under each wing.

The aircraft was designed as a fighter, and there has been a longstanding rumor that Adolf Hitler’s insistence that it was developed as a fighter-bomber impeded delivery. While that may be true in part, the fact remains that the bigger issue was the slow supply of engines that delayed production.

Not Fully German Made

The aircraft may have been designed in Germany but many components for the Me 262 were produced in German-occupied Czechoslovakia during the Second World War. The large Avia factory, which was located near Prague, had become the largest aircraft producer in the country in the 1930s, and it produced a variety of aircraft for the Luftwaffe.

After the war, considerable stockpiles of engines, airframes, and other spare parts existed and it was decided by the post-war Czechoslovakian government to use those to produce aircraft for its newly reformed Czech Air Force. The result was nine single-seat Avia S-92 and three two-seat Avia CS-92 fighters that were kept flying until 1951 when they were replaced in service by Soviet jet fighters. One of each of those is now on display at the Prague Aviation Museum in Kbely.

Me 262 two-seaters were produced for training and night-fighting duties. It is believed that only 15 or so of the Me 262B-1a tandem two-seat trainers were converted into Me 262B-1a/U1 night fighters.

Today only three of the two-seat variants survived, and the best is believed to be “Red 8” (Werk/nr 110305), the only genuine Me 262 night-fighter to survive the war. It is now on display at the Johannesburg War Museum, complete with its radar array and drop tanks intact.

Other Surviving Me 262s

In addition to the single two-seat model, there are less than a dozen Me 262s – including a few that have been restricted from crashed or incomplete aircraft – on display around the world. One owned by the Flying Heritage Collection in Everett, Washington is being restored to flying condition.

In addition, a series of reproductions had been constructed by Legend Flyers, with one being delivered to the Messerschmitt Foundation for use in air shows.