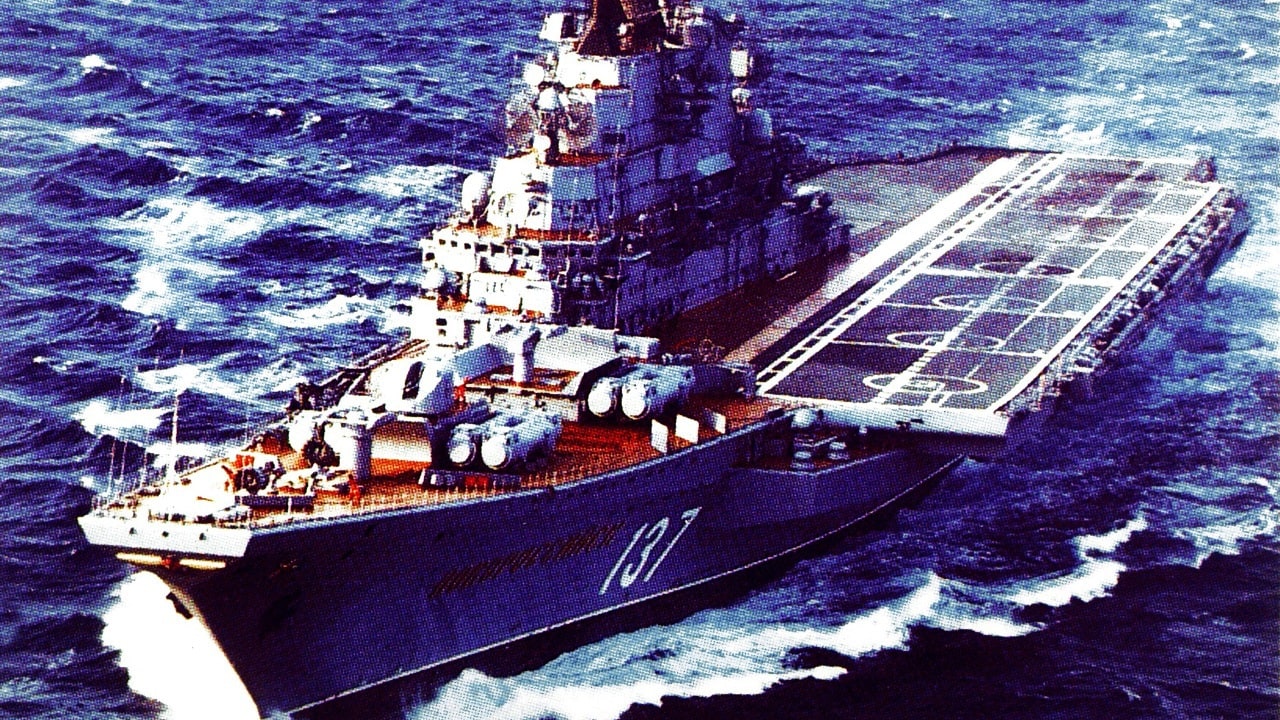 Novorrsiysk – The Worst Russian Aircraft Carrier? During the final decades of the Cold War, the Soviet Union began to develop the Project 1143 Krechyet (Gyrfalcon), a new class of warship that would carry fixed wing-aircraft. It combined the capabilities of a cruiser and carrier – something that set it apart from the United States Navy and British Royal Navy carriers of the era. The Kiev-class was thus designated an aircraft cruiser – a fact that addressed some technicalities with the 1936 Montreux Convention that prohibited warships greater than 15,000 tons from passing through the Turkish Straits at Istanbul.

As with the Moskva-class before them, the vessels were a mix of ship types, with the front half resembling a guided-missile cruiser and the remainder of the ship resembling an aircraft carrier. At 899 feet, the ships were approximately 85 percent as long as the U.S. Navy’s then-new Nimitz-class carriers.

The forward portion of the warships was designed to accommodate a considerable amount of firepower, which included eight SS-N-12 “Sandbox” anti-ship missiles. Each of those SS-N-12 missiles, known as 4K80 in the Soviet Union, carried a 2,000-pound high explosive warhead or a 350 kiloton nuclear warhead. The Sandbox had a range of 341 miles, with targeting data provided by shore-based Tu-95 maritime patrol aircraft or helicopters from the warship’s air wing.

The hybrid warships also featured a six-degree angled flight deck that started parallel to the bridge and ran all the way to the stern; covering about two-thirds of the overall length of the ship while half of the ship retained traditional cruiser characteristics. The Kiev-class was designed to operate with up to twenty-two Yak-38 “Forger” fighters, which used two downward facing engines and a vector-thrust engine in the rear to take off and land vertically. However, the ships typically carried up to thirteen Forgers and around a dozen Ka-25 “Hormone” helicopters that acted in an anti-submarine warfare (ASW) capacity, as well as over-the-horizon missile targeting for SS-N-12 missiles, and even search and rescue roles.\

The Soviets had built and commissioned a total of four Kiev-class warships including the Baku subclass, and among the original three was Novorossiysk of Project 11433/1143M. Named for the City of Novorossiysk in Krasnodar Krai, Russia, the largest Russian port on the Black Sea, she was laid down at the former Soviet Black Sea Shipyard in Mykolaiv, Ukraine, at the end of September 1975 and launched just over three years later.

Commissioned in September 1982, Novorossiysk entered service with the Soviet Pacific Fleet. During that time, in March 1984, along with her escorting battle group took part in exercises in the Pacific. It didn’t go so well for the aircraft cruiser. According to a summer 1990 report from Airpower Journal titled, “The Transformation of Soviet Maritime Air Operations, Implications for U.S. Maritime Strategy,” the Soviet warship came under attack in the simulated exercise.

“After approximately eight days, the ships turned and headed northwest toward the Kuril Islands, simulating an enemy carrier strike against the Soviet Union. As the Novorossiysk approached the islands, about 700 miles east of Japan, Bears flew reconnaissance missions near the battle group and helped vector some 20 Backfires to their targets. A U.S. Navy description of the Novorossisysk exercise notes that ‘the force was hit by simulated air strikes and probably by submarines firing torpedoes and cruise missiles from 1120km east of Japan, on 14 April. They came at it with submarines and aircraft–everything they had.'”

While the ship continued to operate as part of the Pacific Fleet, she made her final voyage in mid-1991, just before the dissolution of the Soviet Union. Operating with the Russian Navy, she suffered a serious engine room fire, and was sold for scrapping in 1995. Her sister warship Kiev had been sold to a Chinese company and was converted into a theme part before being renovated into a luxury hotel; while Minisk was sold to China to serve as a museum yet as of last year was reportedly “rotting away” in a landlocked Chinese lagoon.

Only the Baku-subclass vessel Admiral Gorshkov fared better. She was sold to India in 2004 and is now the flagship INS Vikramaditya.