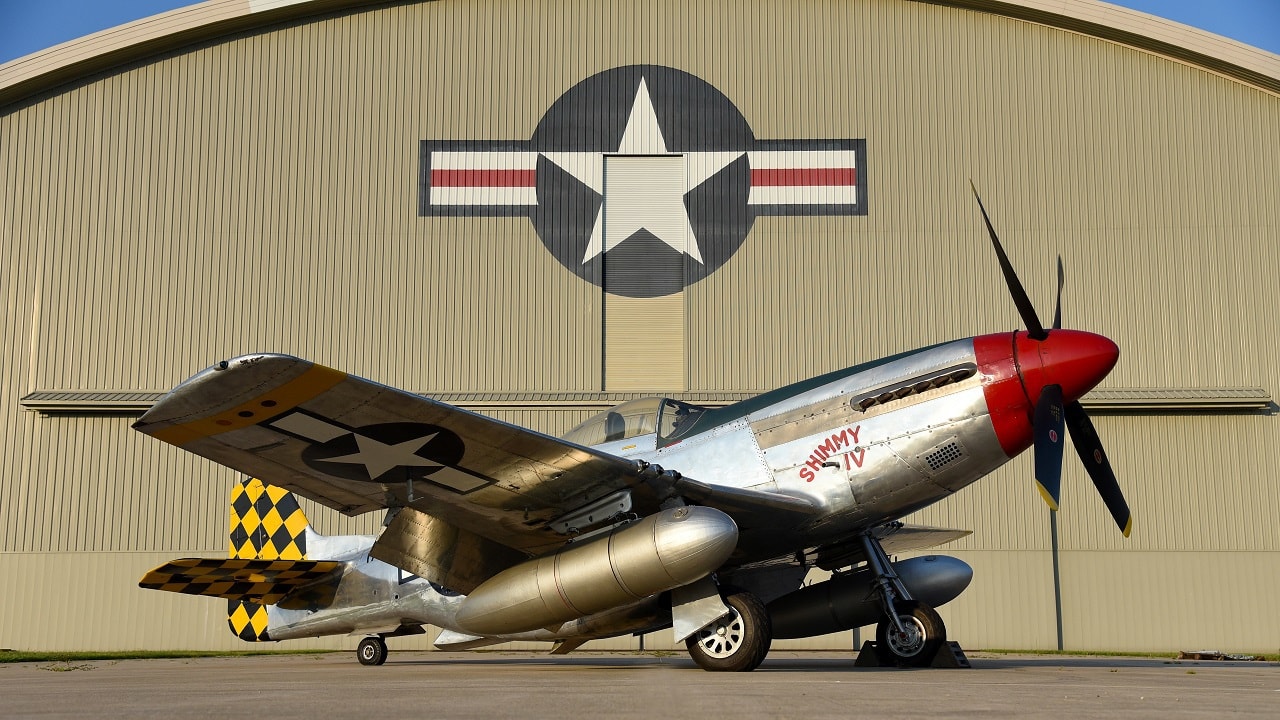 The Mustang was among the best and most well-known fighters used by the U.S. Army Air Forces during World War II. Possessing excellent range and maneuverability, the P-51 operated primarily as a long-range escort fighter and also as a ground attack fighter-bomber. The Mustang served in nearly every combat zone during WWII, and later fought in the Korean War.

How the P-51 Mustang Became a Legend – Shortly after surrendering to U.S. forces at the end of the Second World War in 1945, Reichsmarschall Hermann Goering had reportedly told his captors, “The day I saw Mustangs over Berlin, I knew the jig was up.” Whether such a line was actually uttered by the former supreme commander of the once-mighty Luftwaffe isn’t known for certain, but the sentiment was absolutely true.

What is also notable is that the aircraft he may have described – the North American P-51 Mustang – was actually conceived in haste a mere five years earlier. The P-51 was designed, built and flown in just 180 days. Also remarkable is the fact that North American Aviation (NAA) had originally been asked to produce Curtiss P-40s under license for the Royal Air Force (RAF), which was able to engage with Goering’s Luftwaffe in the Battle of Britain.

Instead, a team headed by James Kindelberger at NAA responded to the British Purchasing Commission with an offer to design and produce a more modern fighter. The prototype NA-73X airframe was designed and produced in just 102 days after the contract was signed, rolled out on September 9, 1940, and took its first flight on October 26.

Contrary to the legend, however, the commission didn’t actually set a specific deadline for the completion of the prototype, yet NAA was able to present the British with a preliminary design less than four months after the blueprints were first approved. The British had only suggested that a timescale of 120 days would be a good target. It was a true time crunch – as the team at NAA spent some 78,000 engineering hours on the first prototype. All of that is even more impressive due to the fact that North American had no previous experience with fighter design.

While the P-51 Mustang would go down in history as arguably the best operational piston-engined fighter ever built, and was able to provide long-range escort to U.S. heavy bombers that could the take war to the very heart of Nazi Germany, it didn’t immediately impress.

The Mustang entered service with the RAF in 1942, and it was hardly an instant success. It was initially equipped with the Allison V-1710 liquid-cooled engine, which limited its performance at altitude. For that reason, the aircraft was primarily employed in an armed tactical reconnaissance role.

In addition, the Mustang was marked initially with nearly complete indifference and even opposition from the service that would go on to become its major operator, the United States Army Air Force. However, it was adopted as the A-36 ground-attack aircraft and first action in North Africa.

A Legend is Born

In an attempt to address the altitude performance issue, the RAF proposed the installation of the Rolls-Royce Merlin engine, which was used with the P-51B and C fighters. The move had been spurred by the urgent development of the Merlin 60 series, which was a new family of engines that were produced for the pressurized, high-flying Wellington VI. The bomber played little part in the war effort, yet the use of the engine in the Mustang was a game changer.

The switch from the Allison to Rolls-Royce Merlin engines has been called the one of the most important steps in aviation design to occur during the war. It allowed the Mustang to serve as a multi-role combat fighter and instant classic. It was so aerodynamic that it could outpace the RAF Supermarine Spitfire, which was equipped with the same engine.

Under Lend-Lease, the RAF received 910 of the P-51Bs and P-51Cs, which the RAF designated the Mustang Mk III.

During the Second World War, the aircraft proved to be quite the deadly warbird thanks to its armament, which included three .50 caliber Browning AN/M2 machine guns in each weapon. Capable of firing 75 rounds per second, the aircraft carried enough ammunition for 32-seconds of sustained fire. Mustang pilots shot down a total of 4,950 enemy aircraft while more than 250 pilots even achieved “ace” status – and had an average rate of 7.69 aircraft “kills.”

Over a five-year span (1940-45), 16,776 of the P-51s were produced – roughly 350 aircraft per month. Many of the aircraft were sold off after the Korean War, where they were used as personal racing planes and many are still in private collections. The last P-51 was retired from the U.S. Air Force in 1978, and the Dominican Republic Air Force retired its last P-51 Mustang only in 1984.

Now a Senior Editor for 1945, Peter Suciu is a Michigan-based writer who has contributed to more than four dozen magazines, newspapers, and websites. He regularly writes about military hardware and is the author of several books on military headgear including A Gallery of Military Headdress, which is available on Amazon.com. Peter is also a Contributing Writer for Forbes.