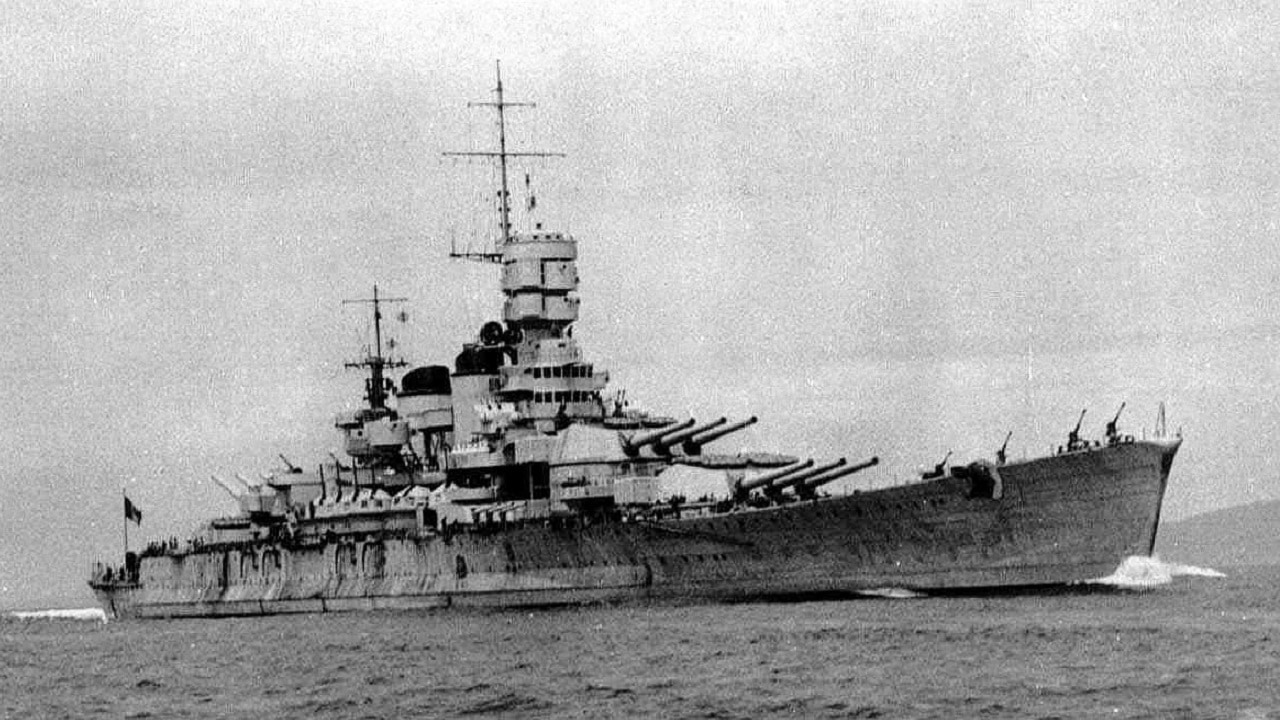 While not remembered by general naval historians, Italy’s World War II battleship fleet was quite powerful. The Roma was one such battleship that history should never forget. She might not be as powerful as the Iowa or Yamato, but she could pack a serious punch in a fight: Italy’s Regia Marina was one of the busiest navies of the interwar period. Four old battleships were rebuilt so completely that they barely resembled their original configuration. This helped Italy achieve what was really, by the late 1930s, significant ship-to-ship superiority over the French Navy. The reconstruction of these ships helped generate ideas as to what their new battleships should look like.

The new ships were to have enough speed to catch Dunkerque and Strasbourg (a new pair of French fast battleships), and enough firepower to destroy them. The result was the first post–Washington Treaty class of genuine fast battleships, the Littorio class.

The third ship of the Littorio class, Roma displaced forty-two thousand tons, could make thirty-two knots, and carried nine fifteen-inch guns in three triple turrets. Although well protected from shellfire, Roma and its sisters (Littorio and Vittorio Veneto) were built with an experimental underwater protection system designed by Italian naval architect Umberto Pugliese. This system proved disastrous in practice; Roma’s sisters repeatedly suffered heavy damage from torpedo attacks. Like the German Bismarck class, but unlike Allied battleships of the day, Roma did not carry a dual-purpose secondary armament, a measure that would have saved weight and improved its antiaircraft capabilities. The Italian fifteen-inch gun was also something of a disappointment, as it fired a very heavy shell at a high velocity, but was difficult to reload, was inaccurate and incurred serious barrel wear. Finally, Roma had a very short range, although this was of little concern in the Mediterranean. All in all, Roma and its sisters were probably the least capable of the world’s final generation of fast battleships, with the likely exception of Bismarck and Tirpitz. Nevertheless, they were useful ships, and in battle the practical difference between Roma and the most of the modern Allied fast battleships would have been minimal.

Roma entered service in mid-1942, after many of the major actions of the Mediterranean had already been fought. By this point the Regia Marina was beset by fuel problems, precluding the aggressive use of Roma, its two sisters and most of the other heavy units of the fleet. Roma’s main sorties involved transit from one base to another in an effort to avoid Allied air attacks. However, as a fleet-in-being the Regia Marina posed a significant threat to Allied naval activity, forcing Allied planners to account for the existence of several modern, effective battleships.

In September 1943, the Italian government decided to seek an armistice with the western Allies. The surrender of the Italian fleet was a prominent condition of this agreement. Along with its two sisters and numerous heavy cruisers, Roma (flagship of the squadron) was in preparation to attack the Allied landing force at Salerno when the armistice was signed. Instead of heading to Salerno, Roma and its sisters laid a course for Malta.

The Germans sniffed the plan out shortly after the squadron sortied. The Luftwaffe dispatched a group of six Dornier Do 217 bombers armed with the Fritz X glider bomb, one of the earliest precision-guided weapons. Two of the armor-piercing bombs hit Roma; the first badly damaged its engine room, and the second caused an explosion in its forward magazine. Over twelve hundred men went down with Roma. Its sister Italia (renamed from the fascist Littorio) received a hit, but survived. Both Italia and Vittorio Veneto arrived at Malta without further molestation, and were then transferred to reserve status in Egypt.

Some consideration was given to the idea of incorporating the remaining two vessels into the Royal Navy or the U.S. Navy for use in shore bombardment and carrier escort in the Pacific, but concerns over ammunition and spares scotched the idea. In any case, the American, British and French navies had overwhelming superiority in the Pacific by 1944. After the war, the two surviving ships (as well as several older Italian battleships) were assigned by lot as war reparations to the Allied powers; the United States won Italia, and the British Vittorio Veneto. Both ships were physically returned to Italy, and scrapped in the early 1950s.

These were lovely ships aesthetically, with crisp lines and a well-proportioned superstructure. They came into service before most of the rest of the “fast battleship” generation, and had flaws commensurate with their pace setting. Despite their drawbacks, Roma and its sisters were useful ships.