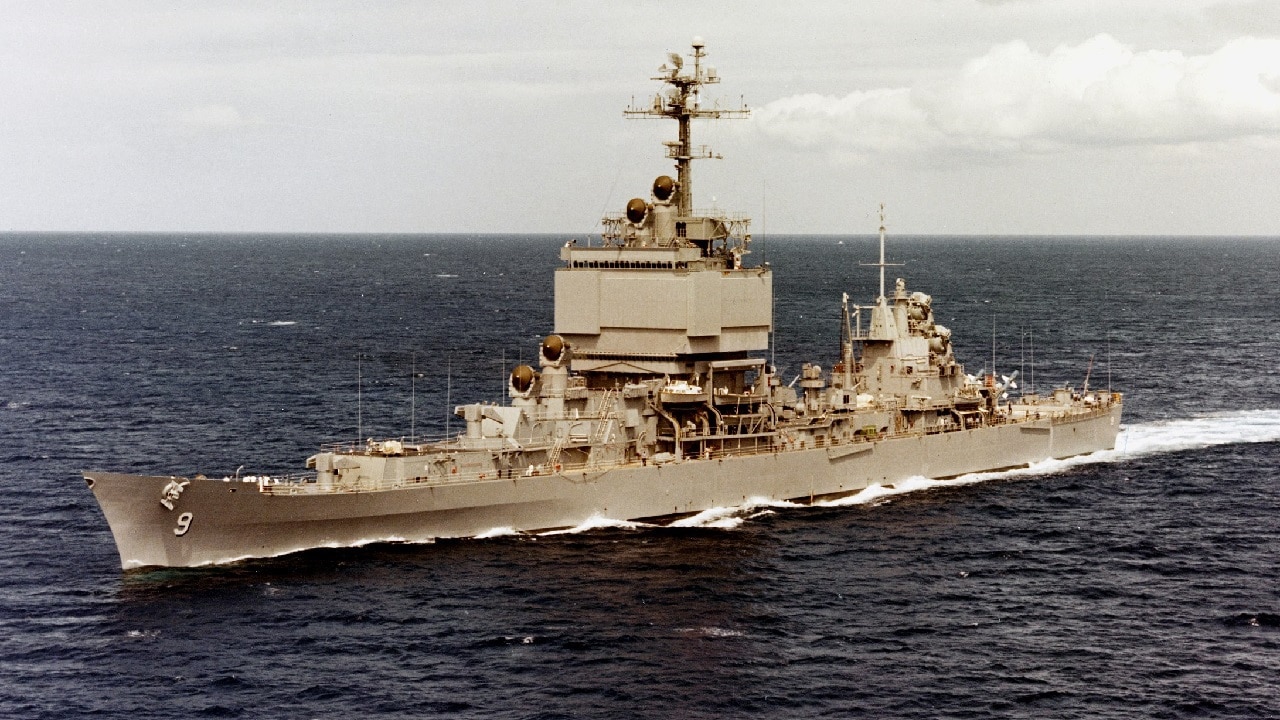 Most naval history buffs can tell you that the USS Nautilus (SSN-571) was the world’s first operational nuclear-powered submarine, while USS Enterprise (CVN-65) was the first nuclear-powered aircraft carrier – yet many may wrongly assume that the carrier was also the first United State Navy surface warship to be powered by nuclear energy. In fact, it was the USS Long Beach (CGN-9), a warship that was originally intended to be no larger than a frigate but during the design stage was rapidly increased to the dimensions of a heavy cruiser, which has the distinction of being the first nuclear-powered surface vessel.

As an experimental platform, Long Beach was the only ship of her class. She was also the last cruiser built for the U.S. Navy as a cruiser design as all subsequent cruiser classes were essentially built on scaled-up destroyer hulls or converted from existing cruisers. The increase in size was to accommodate various missile systems, while a helicopter pad was installed at the stern of the ship – however, she only carried helicopters during operations off Vietnam. During her service, Long Beach had the highest bridge structure of any warship smaller than an aircraft carrier.

Initially, a Talos missile launcher was mounted to the stern of the ship, but it was later replaced by two box launchers for BGM-109 Tomahawk cruise missiles, with each launching containing four missiles. There were also two forward launchers for the Terrier and Talos surface-to-air missiles (SAMs), and those were also later replaced by the longer-range Standard missile.

The Long Beach was powered by two C1W nuclear reactors, with two General Electric steam turbines, which provided 59.68 MW (80,000 shp). The powerplant enabled the warship to reach a speed of 30 knots, while her range was virtually unlimited.

The missile cruiser had a complement of 1,160 officers and sailors.

USS Long Beach, which was the third ship to be named after the California city, was laid down in December 1957 and launched in July 1959. She was commissioned on September 9, 1961 under the command of then-Captain Eugene Parks Wilkinson, who had previously served as the first commanding officer for the USS Nautilus. The cruiser served in the Atlantic Fleet from 1961 to 1966.

In May 1964, Long Beach joined the nuclear-powered aircraft carrier USS Enterprise and the guided-missile frigate USS Bainbridge (DLGN-25) to form the all-nuclear-powered Task Force 1, the first such battle force group of its kind in the history of naval operations.

At the end of July of that year, the three warships began Operation Sea Orbit, a two-month unrefueled cruise around the world. Task Force 1 left Gibraltar on July 31, sailed down the Atlantic Ocean and then around Africa, crossed the Indian Ocean, and then to the Pacific Ocean before rounding Cape Horn. The task force completed the 30,216 nautical mile voyage in 65 days.

In 1966, the nuclear-powered cruiser was deployed for her first tour of duty off Vietnam and was mainly stationed in the northern part of the Gulf of Tonkin, where the U.S. Navy had created its Positive Identification Radar Advisory Zone (PIRAZ). From that position, Long Beach maintained constant radar surveillance to ensure that the North Vietnamese intruder aircraft couldn’t evade identification and attempt to confront U.S. strike aircraft. The warship also provided facilities for an onboard search-and-rescue helicopter.

During her second deployment to the Gulf of Tonkin, Talos missiles fired from the cruiser destroyed two Vietnamese MiG-17s at a range of 70 miles. It was the first record use of naval SAMs in combat conditions.

The warship was updated in the late 1970s and later operated as part of the UN task force during Operation Desert Storm. Instead of receiving a third nuclear refueling and proposed upgrade, USS Long Beach was deactivated on May 1, 1995, after more than 33 years of operational service. Nuclear power had been deemed too expensive to use on surface ships smaller than aircraft carriers in view of defense budget cutbacks after the end of the Cold War.

In July 2012, Long Beach was sold at auction for recycling. It marked the final end of the world’s first nuclear-powered surface warship.