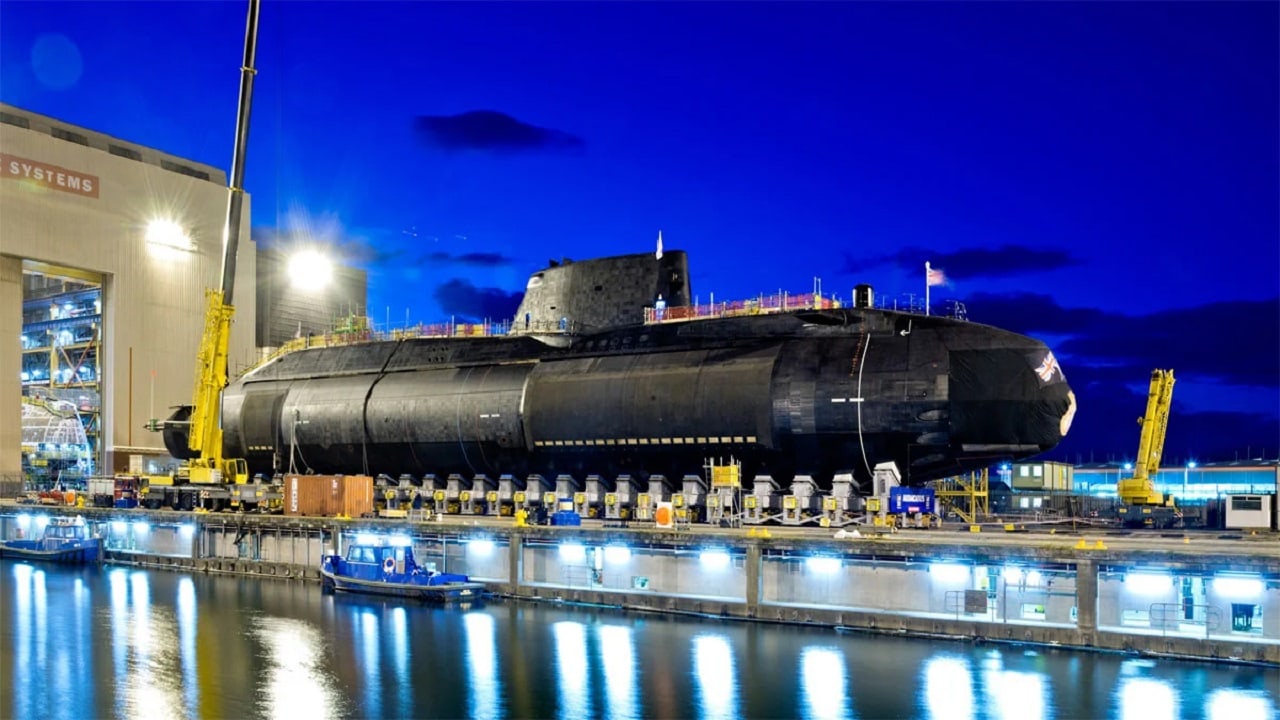 Meet the Royal Navy’s Most Astute-Class of Submarines – During the ongoing NATO Cold Response 2022 exercises in Norway – the largest winter military drills in 30 years – Royal Marines conducted a small boat raid from a Royal Navy Astute-class submarine. The exercise demonstrated the unique combined capabilities of the Royal Marines and the Submarine Service.

The Surveillance and Reconnaissance Squadron – which is drawn from the Plymouth-based 30 Commando Information Exploitation Group – are trained to gather information on the terrain, the enemy and suitable beach landing places for larger amphibious forces to come ashore, arriving by ski, snowmobile, boat, all-terrain vehicles, helicopter or parachute, depending on the situation and environment. In the drill, the small teams launched from the Royal Navy’s Astute-class hunter-killer submarine

“The ability to operate undetected for significant periods of time with top quality kit ensures that a submarine remains a formidable delivery mechanism, in this case enabling the covert deployment of the Surveillance and Reconnaissance team as showcased in the exercises off Norway,” said Commodore Jim Perks, the head of the Royal Navy’s Submarine Service. “Our ability to work together highlights the remarkable attributes of the team and the platforms in which we operate.”

The drills further highlighted the capabilities of the Astute-class boats, which are the largest and most advanced attack submarines ever constructed for the Royal Navy, and come just a week after another of the submarines went “head-to-head” in a series of warfare training exercises off the coast of Scotland. The advanced sub played a game of cat and mouse near the stone frigate operating base HMS Gannet against a Merlin Mk2 helicopter.

Perspective submarine commanders and trainee helicopter sub-hunters pitted their skills against each other during a week of intense training, as the submarine attempted to evade detection and carry out a series of missions while being hunted by the helicopters above. The Merlin Mk2 was equipped with powerful dipping-sonar and sonobuoys, enabling them to listen for the tell-tale sounds of a boat moving through the depths.

While the Royal Navy didn’t report how the submarine fared in the Scottish drills, the Astute-class certainly had the advantage.

The class was the first of nuclear submarines worldwide designed in a 3D computer-aided environment, while the boats have been outfitted with many technological firsts, including not having an optical periscope. Instead, high specification video technology has been employed, which enables the crew to scan the horizon and get a 360-degree view to address potential threats.

Moreover, unlike other nuclear-powered submarines, the Astute-class was developed to utilize state-of-the-art anti-acoustic tiles. Each hull is fitted with more than 39,000 acoustic tiles that mask the vessel’s sonar signature, and allow the submarines to glide through the water almost silently. The little noise the boats give off has been compared to that of a “baby dolphin.”

Each of the submarines is 97meters (32-feet) in length and has a crew of around 100 sailors, with capacity for 109. The boats of the class are powered by a Rolls-Royce PWR2 (Core H) reactor and fitted with a pump-jet propulsor, the same reactor that was developed for the Vanguard-class ballistic missile submarines. The nuclear reactor, which powers the submarines and has a twenty-five-year lifespan before needing to be refueled, can be used to recycle air and water. This provides a theoretically unlimited endurance for the submarine, and could circumnavigate the globe without surfacing – while it is typically supplied with about 90 days of food.

The Astute-class has stowage for 38 weapons and would typically carry a mix of Spearfish heavy torpedoes and Tomahawk Block IV cruise missiles, which are capable of hitting a target to within a few meters, to a range of 1,000 miles (1,600 km). In addition, the boats are also fitted with a dry deck shelter, which allows special forces – such as the Royal Commandos or Special Boat Service (SBS) operators to deploy whilst the submarine is submerged.

The first four submarines in the class, HMS Astute, HMS Ambush, HMS Artful, and HMS Audacious, have been handed over to the Royal Navy and are in active service, while a fifth, HMS Anson, is currently conducting its sea trials. Two additional boats – the future Agamemnon and Agincourt – are now under construction at the at the BAE Systems site in Barrow-in-Furness, Cumbria. Each of the submarines costs a reported £1.6 billion to build, but the capabilities offered is essentially priceless.