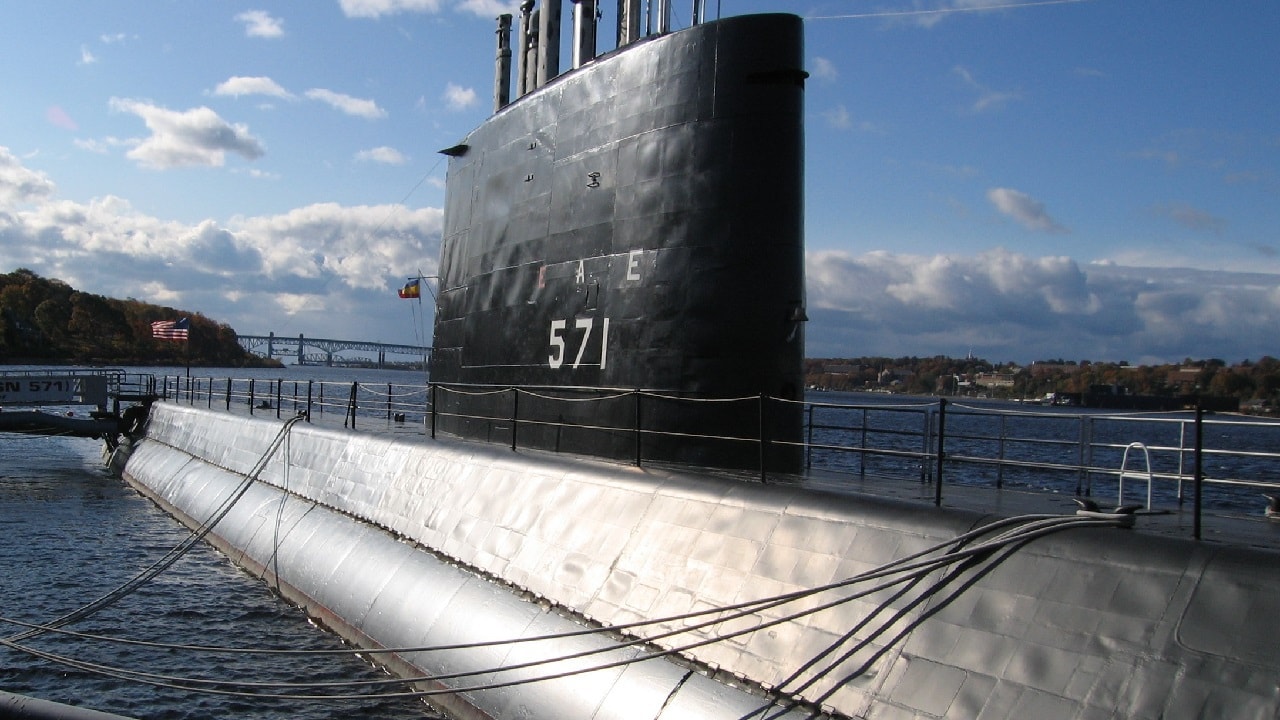 The USS Nautilus permanently docked at the US Submarine Force Museum and Library, Groton, CT.

USS Nautilus Submarine Sets the Nuclear Standard – In the late 1940s, then U.S. Navy Captain Hyman G. Rickover was frustrated with the state of affairs in undersea warfare. Submarines in those days had a limiting hybrid mix of diesel engines and battery/electrical propulsion. Rickover thought that a nuclear power plant was more desirable and could keep the submarine continuously powered for as long as it remained out to sea.

Can a Submarine Really Be Nuclear-powered?

Rickover led a group of specialists from the Atomic Energy Commission who were focused on the science and engineering aspects of nuclear reactors. Congress got involved in 1951 and approved the plan for the first nuclear-powered submarine. Called the Nautilus, its keel was laid in 1952 and the nuclear sub was launched in 1954.

Getting Underway with Nuclear Power

On January 1, 1955, it embarked on its first patrol and famously got “underway on nuclear power.” The boat soon set records for speed and duration for staying submerged. Specifically, it traveled 1,381 miles in 89.8 hours on a voyage to Puerto Rico. Later that year, it wowed the navy in exercises, tested its torpedo tubes, and visited naval bases on the East Coast of the United States.

The USS Nautilus was ahead of its time. Most submarines were still using World War Two tactics – which included waiting for enemy subs to surface to attack them with airplanes or dropping depth charges when subs were submerged at shallow depths. The Nautilus just ran silent and ran deep without having to surface. Airplanes and depth charges at the time were not effective.

Next Mission: The Arctic

By 1957, USS Nautilus had been in action for 60,000 nautical miles and it received a new nuclear fuel core. Then the USS Nautilus embarked on a mission no diesel sub could manage. It was time to take on the Arctic. This was a 1,383-mile journey from New London, Connecticut. Now there was a submarine that could travel under the ice. This capability was important to show the Soviet Union that an American nuclear sub could threaten the Russian homeland by transit through the Arctic. In 1958, Nautilus showed off some more by sailing submerged under the North Pole. The crew was awarded a Presidential Unit Citation for that feat.

It Played a Role in the Cuban Missile Crisis

It seemed like USS Nautilus could circumvent the world and do an admirable job on whatever it set out to do. It even participated in the quarantine of Soviet shipping during the Cuban Missile Crisis. Then it took off on a two-month Mediterranean tour. But it finally needed a 27-month maintenance period in 1963.

This refit was just what the doctor ordered because the USS Nautilus logged its 200,000th mile and then its 300,000th mile in 1966. For the next 12 years, the Nautilus partook in various exercises and drills with the other nuclear submarines in the fleet. It served as a “big brother” and role model for those boats. The last mission was through the Panama Canal and onto the west coast of the United States. Nautilus finally decommissioned in 1980.

It is difficult to imagine a modern nuclear navy without the USS Nautilus. The sub was truly revolutionary and had a long, colorful history. It accomplished everything planned for it and more. The crew must have felt special to serve on such a path-breaking boat. This vessel was a credit to the navy and would have made Admiral Rickover proud.