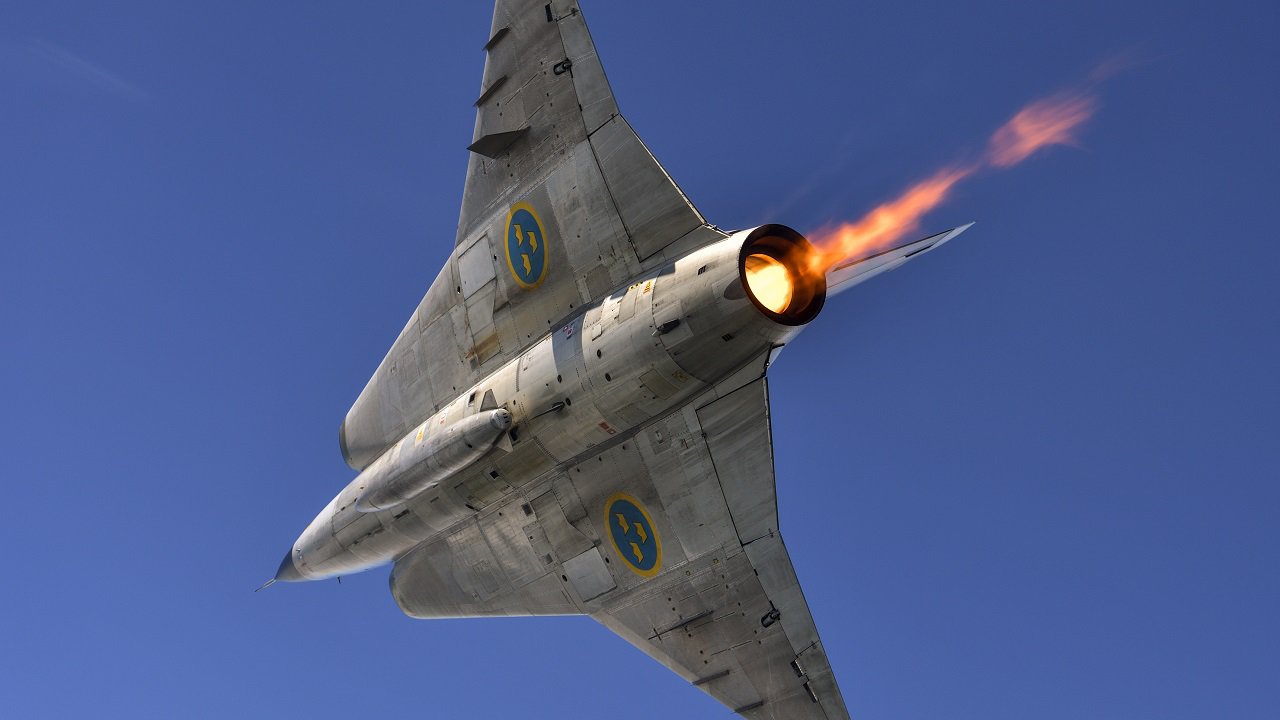 Image of a Cold War Saab 35, a plane that would have looked similar to the A-36.

The A-36: Sweden’s Would-Be A-Bomber – As I noted in my earlier articles on the Saab 37 Viggen (“Thunderbolt/Tufted Duck”) and Saab 35 Draken (“Dragon/Kite”), although Sweden hasn’t participated in an officially declared war since the Swedish-Norwegian War of 1814, and maintained a strict neutrality policy throughout the Cold War—bear in mind that it’s only now that Sweden is seriously considering joining NATO—that certainly didn’t stop Sweden from producing some top-notch and high-tech weapons systems. Clearly, they still wanted to be prepared for war against the Soviet Union just in case.

A wise precaution, as the Swedes were no doubt ever mindful of their brother Scandinavian country Finland’s military run-in with the Soviets during the Winter War of 1939-1940. Moreover, Sweden found itself in a total of eleven wars with Russia between the 12th and 19th centuries. As it turns out, Sweden’s collective military R&D genius extended beyond fighter planes and into the realm of bombers such as the A-36. Unlike the aforementioned fighter planes, the A-36 bomber never got off the ground (literally or figuratively).

As noted by my 1945 colleague Brent M. Eastwood, “Surprisingly, the Swedes even had their own nuclear-weapon program in the 1950s and 1960s – not something you would expect from the peace-loving country. They needed an airplane to carry the bomb had they decided to go all-in on the project and produce an actual nuclear device. It was thought the bomb would give the Swedes a flexible nuclear response as it faced an existential threat from the Soviet Union.”

Enter Projekt 1300, which envisioned a delta-wing supersonic bomber capable of carrying a free-falling nuclear weapon weighing up to 1,700 pounds (800kg).

Unlike American or Soviet bombers of the era (such as the B-52 and the Tupolev Tu-95 “Bear” respectively), which needed to fly extreme distances, the Swedes were able to opt for a smaller bomber that could be flown by a single pilot, with a proposed range of around 250 miles (410 km) that was sufficient to reach targets in the Baltic States—which were under the control of the Soviet Union at the time—and even the city of Leningrad (today’s St. Petersburg).  East Germany and Poland—the USSR’s Warsaw Pact allies at the time—also would have been within striking distance.

The delta-wing design was deemed more optimal for the A-36’s intended airspeed of Mach 2. Powered by twin British Merlins Rolls-Royce Olympus engines, the A-36 was going to be 55-feet long with a wingspan of 31 feet (9.44 meters), a ceiling of 60,000 feet (18,288 meters), and a fuel capacity of 8,800 pounds (3,991kg). An internal weapons bay would have been chosen to avoid (1) issues with the payload overheating that would’ve resulted from underwing carry and (2) drag stemming from an external bomb that would have impeded the aircraft’s overall performance.  The payload itself would have been a free-floating “dumb” bomb.

A-36: This Hammer Would Never be Swung

However, the A-36 project ended up going nowhere fast.

To quote Mr. Eastwood again, “Caution got the better part of the Swedes. Political leadership never wanted a nuclear exchange with the Soviets. And creating its own nuclear program would be difficult, time-consuming, and expensive. Going nuclear did not really fit Swedish peace-loving culture either. Home defense was one thing, but the responsibility for being a nuclear-equipped nation was considered far-fetched. There just was not enough popular support for a nuclear weapons program.”

Ergo the A-36 project was canceled in 1957, the Swedish government decided in 1966 that they were going to resist going nuclear, and in 1968 they scrapped their nuclear bomb project altogether.

Scandinavia remains a nuclear-free region to this day, and there is no indication that it will change anytime soon, even if and when Sweden and Finland do indeed end up joining NATO.