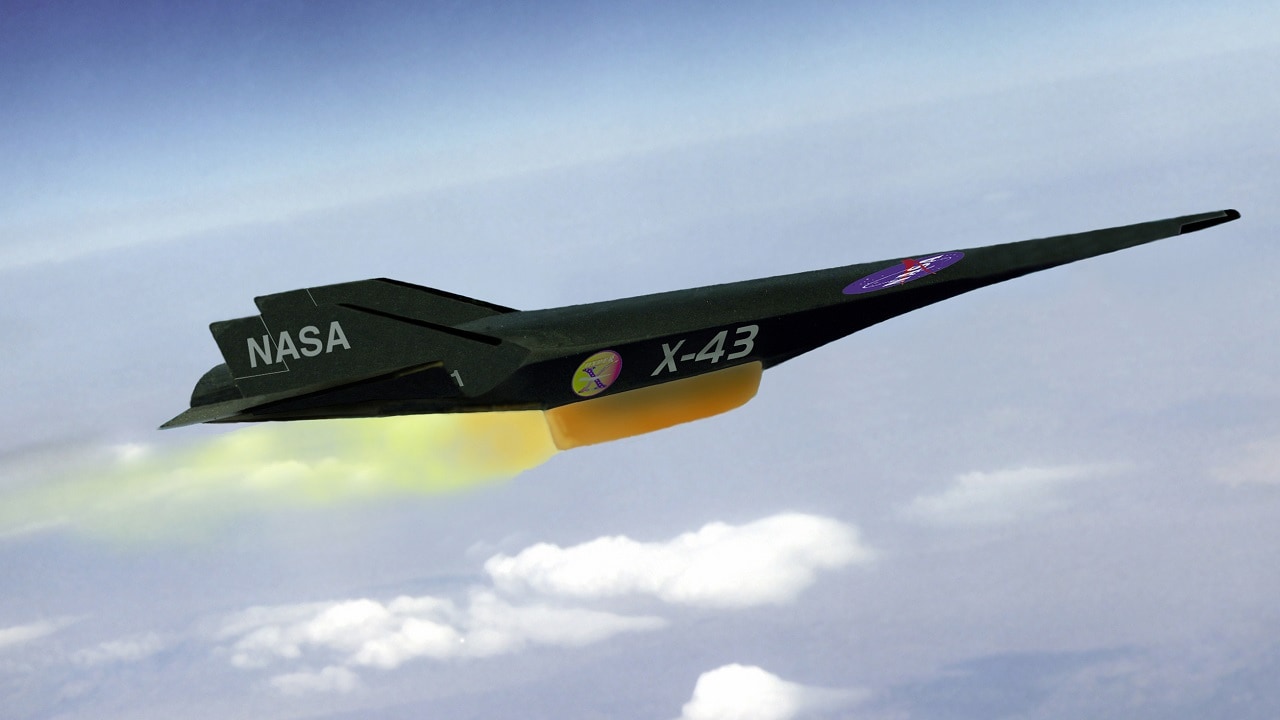 An artist's conception of the X-43A Hypersonic Experimental Vehicle, or "Hyper-X" in flight. The X-43A was developed to flight test a dual-mode ramjet/scramjet propulsion system at speeds from Mach 7 up to Mach 10 (7 to 10 times the speed of sound, which varies with temperature and altitude).

NASA’s X-43 Experimental Unmanned Hypersonic Aircraft – Much is made today about efforts to develop hypersonic weapons, and the worrisome fact that the United States is “lagging” behind the efforts of China and Russia. While it is true that there have been some setbacks, the truth remains that the United States has long been a leader in efforts to develop the fastest vehicles ever to fly.

Meet NASA’s X-43, which was developed as part of the Hyper-X program in the late 1990s. As part of the “better, faster, cheaper” efforts developed by the space agency, Hyper-X utilized National Aerospace Plane technology and ways to quickly move it forward.

The goal of the Hyper-X project was to flight validate key propulsion and related technologies for air-breathing hypersonic aircraft. The first two X-43 test vehicles were produced to fly at Mach 7, which was faster than any air-breathing aircraft had ever flown; while a third X-43 was even able to achieve a speed of nearly Mach 10, at Mach 9.6.

To put that in perspective, the world’s fastest air-breathing aircraft – the much-hyped SR-71 “Blackbird” – could only cruise slightly above Mach 3; whereas the highest speed attained by NASA’s rocket-powered X-15 was Mach 6.7 during its flight tests in the late 1960s.

The X-43A aircraft was essentially a small unpiloted test vehicle that measured just over 3.7 m (12 feet) in length. It featured a lifting body design, where the body of the aircraft is such so as to provide a significant amount of lift for flight, rather than relying on wings. The aircraft weighed roughly 1,400 kg (3,000 lb).

In addition, the test aircraft was designed to be fully controllable in high-speed flight, even when gliding without propulsion. Yet, the aircraft wasn’t actually designed to land and be recovered, and instead, the test vehicles crashed into the Pacific Ocean at the conclusion of a test flight.

The X-43 program was originally intended to feature two additional vehicles, and as initially envisioned, the X-43B would have been used to demonstrate an engine capable of operating in several modes. The X-43B’s combined-cycle engine would have functioned as a normal turbojet at low altitudes and switched to scramjet mode at high altitudes and speeds. Planned X-43B flights were to occur sometime in 2009 after the completion of another Hyper-X test vehicle, the X-43C, which was intended to demonstrate the operation of a solid hydrocarbon-burning scramjet engine at speeds between Mach 5 and 7 sometime in 2008.

Both vehicles were canceled in March 2004 because of a shift in NASA’s strategic goals following the announcement of the “President’s Vision for Space Exploration” in January of that year. While funding continued for the X-43C as part of NASA’s 2005 budget, the program was ended soon after.

Efforts to test hypersonic aircraft have continued with the X-51 program, which began in 2005 – while the aircraft made its first flight in 2010.