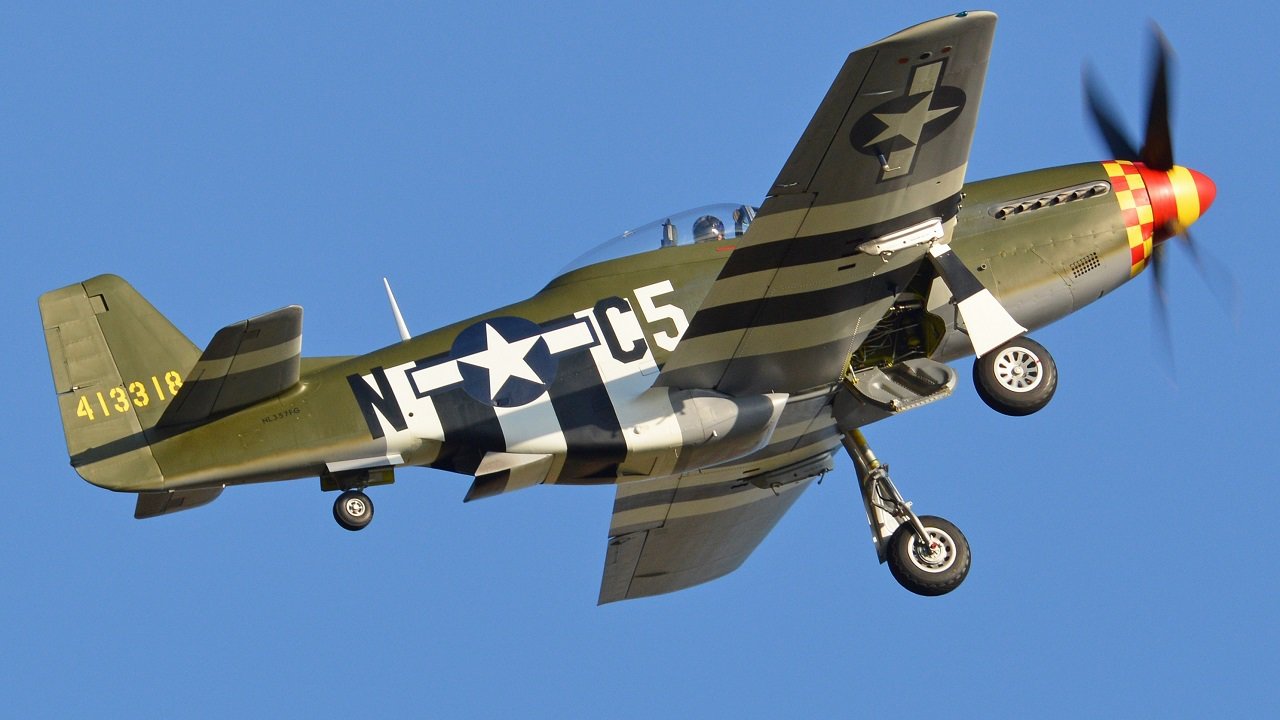 What made the P-51D such a special fighter plane? So then, which warbird deserves the title of Best Fighter Plane Ever? Obviously a highly subjective matter, and one that’s going to stir to sit up some controversy no matter what answer I give, so as I type this I’m mentally prepping to duck the rotten tomatoes that some readers are bound to throw my way for my answer: the North American P-51 Mustang, more specifically the P-51D Mustang.  No, the Mustang doesn’t have the mind-boggling 104:0 air-to-air kill ratio of the F-15 Eagle, the 135:4 kill ratio of the F-14 Tomcat (sorry, Top Gun fans), or the 76:1 kill ratio of the F-16 Fighting Falcon. H

owever, will all due respect to those highly impressive warplanes and their aircrews, none of those more modern jet jockeys played a victorious role in a conflict of such sheer magnitude of WWII, ergo the P-51 DMustang gets the nod.

Other WWII Contenders for the Title

“Whoa there, Chris,” I can already hear fans of various other WWII fighter planes admonishing me, “if you’re gonna set winning ‘Dubya-Dubya Two’ as your bar, what about the (insert their favorite WWII warbird here)…”  And for the sake of being “fair & balanced” (to borrow Fox News’s catchphrase), quite a few of them have valued arguments.

There’s the P-47 Thunderbolt AKA “The Flying Bathtub” AKA  “The Jug,” which was flown by America’s top two aces of the European Theatre, Francis “Gabby” Gabreski and Robert S. Johnson, and also had an unmatched reputation for ability to withstand brutal punishment and still fly home safely.

Then there’s the F6F Hellcat, which finally enabled the U.S. Navy to gain air superiority against the infamous Japanese Zero and was flown by the USN’s top ace, Commander Dave McCampbell, who scored a record-breaking 9 kills in a single day during the Battle of Leyte Gulf.

Still, others can make well-reason arguments for the F4U Corsair (Black Sheep Squadron, anyone?), the P-40 (Flying Tigers, anyone?), and so forth).

However, none of those aforementioned planes quite achieved the true game-changer status during “The Big One” that the P-51 DMustang did.

After all, it was the Mustang that supposedly prompted Reichsmarschall and Luftwaffe head honcho Hermann Goering to concede “The day I saw Mustangs over Berlin, I knew the jig was up.”

That said, when singing the praises of the Mustang’s successes, it should be specified that we’re talking about the D model here. After all, as my 1945 colleague Peter Suciu points out, “While the P-51 Mustang would go down in history as arguably the best operational piston-engined fighter ever built, and was able to provide long-range escort to U.S. heavy bombers that could the take war to the very heart of Nazi Germany, it didn’t immediately impress.”

Mr. Suciu adds: “The Mustang entered service with the RAF in 1942, and it was hardly an instant success. It was initially equipped with the Allison V-1710 liquid-cooled engine, which limited its performance at altitude. For that reason, the aircraft was primarily employed in an armed tactical reconnaissance role.”

Enter the P-51D, with its far more powerful Rolls-Royce Merlin engine that rectified the altitude performance issues, and a “teardrop”, or “bubble”, canopy which addressed problems with poor visibility to the rear of the earlier versions of aircraft.

These factors, combined with the six Browning .50 caliber machine guns—three in each wing—are what enabled the Mustang’s reputation to finally take off (bad pun intended).

As already indicated, the Mustang was thus able to escort the B-17 Flying Fortresses and B-24 Liberators to fly their delight precision bombing missions deep into Germany without suffering unbearable casualties via the ravages of the Luftwaffe anymore.

Meanwhile, in the Pacific Theatre of operations, P-51D pilots performed the same type of crucial escort service for the B-29 Superfortresses in their bombing raids against Japan.

Mustang pilots ended up shooting down a total of 4,950 enemy aircraft while more than 250 of its pilots achieved ace status, and had an average rate of 7.69 air-to-air kills.

The most famous of these pilots was Chuck Yeager—the man would go on to break the sound barrier—who scored 11.5 victories, including 5 in a single day to achieve “ace in a day status,” and even managed to shoot down a Messerschmitt 262 Schwalbe (“Swallow”) jet, the world’s first operational jet fighter.

Here I must confess my own sentimental personal bias in favor of the P-51: back in 1986, at the tender age of 11, the very first model airplane I built was a Monogram 1:48 scale P-51D; concurrently I was reading Yeager’s bestselling autobiography at the time, being enthralled by Chuck’s aforementioned WWII exploits, especially getting a kick out of his described one of his shootdowns along the lines of (paraphrasing here) “Man, I opened up that [Messerschmitt] 109 as if it were a can of Spam.”

P-51D – Beyond the Second World War

The P-51D would go on to serve admirably in the Korean War in spite of being rendered obsolescent by the Jet Age, specifically the MiG-15 fighters flown by the enemy and the F-86 Sabre that became the U.S. Air Force mainstay during the conflict.

Roughly 175 Mustangs still flying today thanks to private collectors and restoration experts, whilst about 100 other Mustangs are on display in museums.