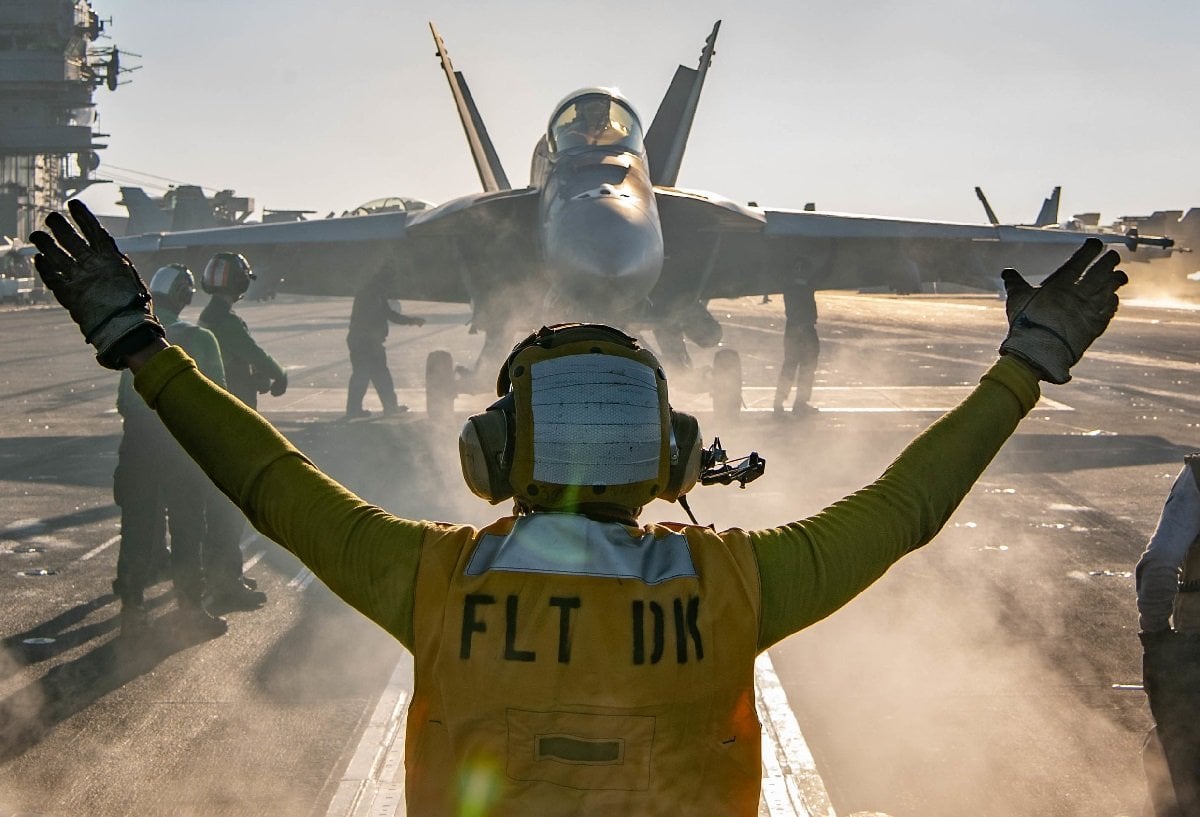 ARABIAN SEA (Jan. 17, 2021) A Sailor directs an F/A-18E Super Hornet from the “Kestrels” of Strike Fighter Squadron (VFA) 137 on the flight deck of the aircraft carrier USS Nimitz (CVN 68) during flight operations. Nimitz, the flagship of Nimitz Carrier Strike Group, is deployed to the U.S. 5th Fleet area of operations to ensure maritime stability and security in the Central Region, connecting the Mediterranean and Pacific through the western Indian Ocean and three critical chokepoints to the free flow of global commerce. (U.S. Navy photo by Mass Communication Specialist 3rd Class Charles DeParlier) 210117-N-JX182-1128.

The Islamic Republic of Iran frequently demonstrates its willingness to strike U.S. assets in the Middle East, including a naval aircraft carrier. While the regime has threatened its Western adversary since the Iranian Revolution, the intensity of its rhetoric has increased exponentially in recent years. As U.S.-Iran tensions have soared following the upheaval surrounding the Joint Comprehensive Plan of Action (JCPOA), the IRGC has greatly expanded its weapons arsenal, making these threats more meaningful. Iran has practiced destroying U.S. military assets, including a naval aircraft carrier, in its semi-regular wargame exercises.

Additionally, Iran’s Navy blatantly assaulted oil tankers in the Gulf of Oman in 2019, indicating the regime has the capability and willingness to escalate conflict. Although U.S. defenses are superior in every way, the potential for Iran’s successful destruction of a U.S. naval aircraft carrier is not impossible.

What Could Iran Really Do?

In 2015, the IRGC fired rockets close to the Nimitz-class carrier USS Harry S. Truman while it was transiting the Strait of Hormuz. Denouncing Iran’s assault as “highly provocative,” the U.S. Central Command (CENTCOM) reported that the IRGC’s motive to fire drills less than 1,500 yards away from the carrier was to threaten America’s presence in the region. The CENTCOM spokesperson at the time, Commander Kyle Raines, stated that “Firing weapons so close to passing coalition ships and commercial traffic within an internationally recognized maritime traffic lane is unsafe, unprofessional and inconsistent with international maritime law.”

While it is doubtful that a barrage of rockets could have sunk the carrier, it could have caused damage and potentially injured soldiers on board. Regardless of the outcome, Iran’s willingness and capability to fire any weapon that close to a U.S. naval aircraft carrier served as escalatory behavior.

In 2019, four oil vessels were attacked off the port of Fujairah on the Gulf of Oman. The tankers were owned by Saudi Arabia and the United Arab Emirates (UAE). Two months later, a suspected coordinated attack on a Japanese-owned tanker and a Norwegian-owned vessel off the coast of Oman greatly escalated tensions between the U.S. and Iran. Then-Secretary of State Mike Pompeo blamed the attack on Iranian aggression.

These events proved significant for multiple reasons. The Gulf of Oman links the Arabian Sea with the Strait of Hormuz- the gateway to the Persian Gulf. Almost a fifth of the world’s oil consumption passes through the strait, making it a strategic waterway. Iran was demonstrating with this assault that they are capable and can interrupt the flow of oil and upset the global economy.

Although Iran’s torpedoes and rockets alone do not pose a significant threat to the survivability of a U.S. naval aircraft carrier, the regime could possess weapons that do. As the IRGC has ramped up its efforts to expand and advance its weapons arsenals in recent years, Iran’s increased capabilities pose a greater threat to its adversaries, including America. The Iranian Navy’s fleet of Kilo-class submarines are equipped with torpedoes that could severely impact the structure of a carrier. Additionally, Iran has been able to develop longer-range ballistic missiles that will ultimately be capable of hitting U.S. assets.

In this article:Aircraft Carrier, Iran, Missiles, Navy, US Navy