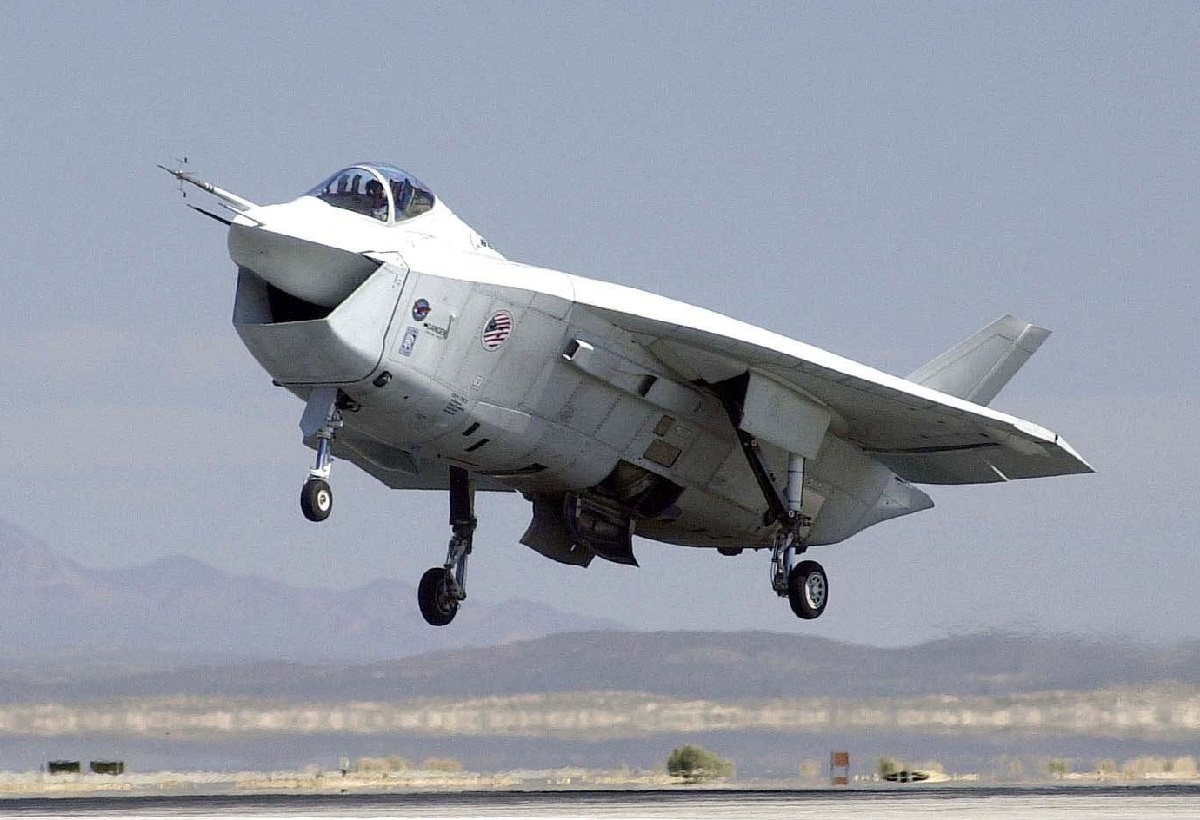 Regular readers of this website are, for the most part, familiar with the story of the Lockheed Martin F-35 Lightning II, the winner of the bidding for the U.S. military’s Joint Strike Fighter program, and its strengths, weaknesses, and growing pains alike.

But like many of my military history and technology buffs, I ofttimes like to play the “what-if” game (which I frequently indulge in by reading alternate history novels written by authors like Harry Turtledove and former Speaker of the House Newt Gingrich). With that in mind, let’s look at the runner-up in the JSF bidding contest, the Boeing X-32.

The Joint Strike Fighter program began in 1994, requiring a stealth fighter that could serve the U.S. Air Force, Navy, and Marine Corps for conventional take-off and landing, vertical takeoff and landing (VTOL), and landing and take-off on a carrier. The USMC, in particular, found VTOL to be desirable after its previous positive experiences with the Harrier jump jet, which also served with distinction for the British Fleet Air Arm during the 1982 Falkland Islands War (then, of course, the Harrier got its fair share of Hollywood glorification [SPOILER ALERT for those two or three of you out there who still haven’t seen the film] thanks to the Arnold Schwarzenegger action movie True Lies).

By 1996, the DoD and DARPA narrowed the contest down to entrants from Lockheed Martin and Boeing, the latter of whom named its version the X-32. As my 19FortyFive colleague Brent M. Eastwood points out, the X-32 “had its own charms and advantages … The design of the X-32 stood out. The cockpit was placed at the front in a fashion that created a short nose. The wings were delta-shaped with vertical tail-wings that canted outward. The air intake was under the cockpit, and this created the warplane’s unique shape.”

Boeing decided to create two prototypes to increase its chances of winning the bid, the X-32A and the X-32B, which made their maiden flights in 2000 and 2001 respectively. The former model demonstrated the ability to refuel in the air, maneuver at supersonic speeds, and show off its internal weapons bays, whilst the latter was able to perform the VTOL function and sported a Pratt & Whitney engine that produced a top speed of MACH 1.6 and a range of 978 miles.

Alas, neither the Navy nor the Air Force was terribly pleased with Boeing’s offerings. Quoting Mr. Eastwood again, “Then the Navy fought for design changes to the two prototypes. Boeing engineers and designers reluctantly complied and got to work. The delta-wing was changed and in its place was a more swept-wing look. The intake inlet was smaller in an alteration that allowed for more stealth. The nose now had a radar. This was different than what Boeing originally proposed while Lockheed Martin kept their design close to the first proposal.”

However, the changed wing design, in particular, meant a likely delay in building a new demonstrator. Moreover, Lockheed’s one model could accomplish all the various take-off and landing missions, a veritable “one-stop shopping center,” not to mention the fact that the X-35 weighed less than the X-32s and had a greater range. These factors served to seal the deal for the USN and USAF alike in favor of the X-35…and sealed the fate of the X-32. 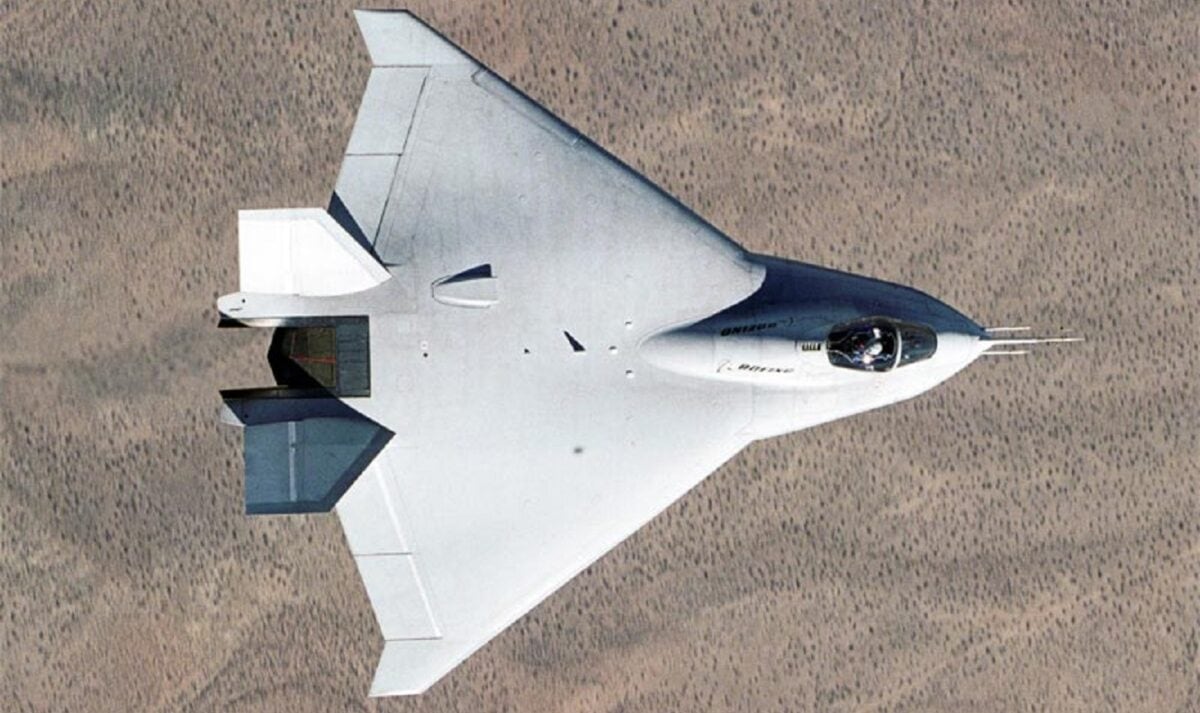 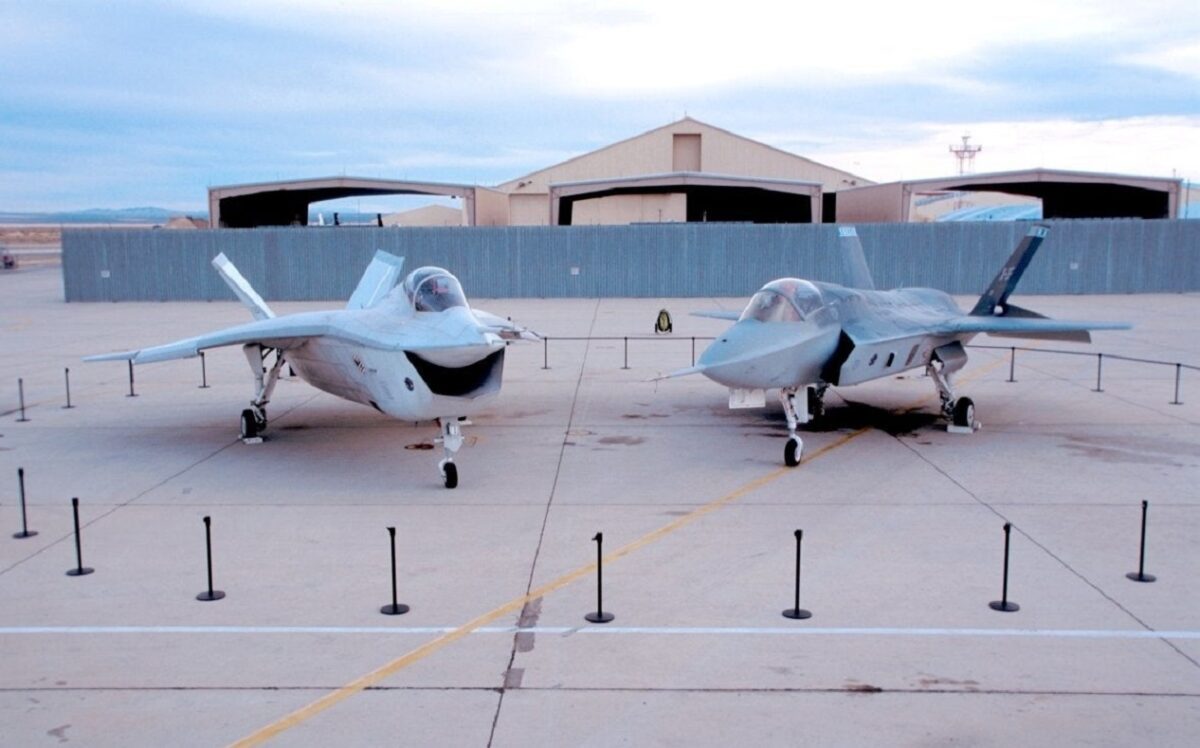 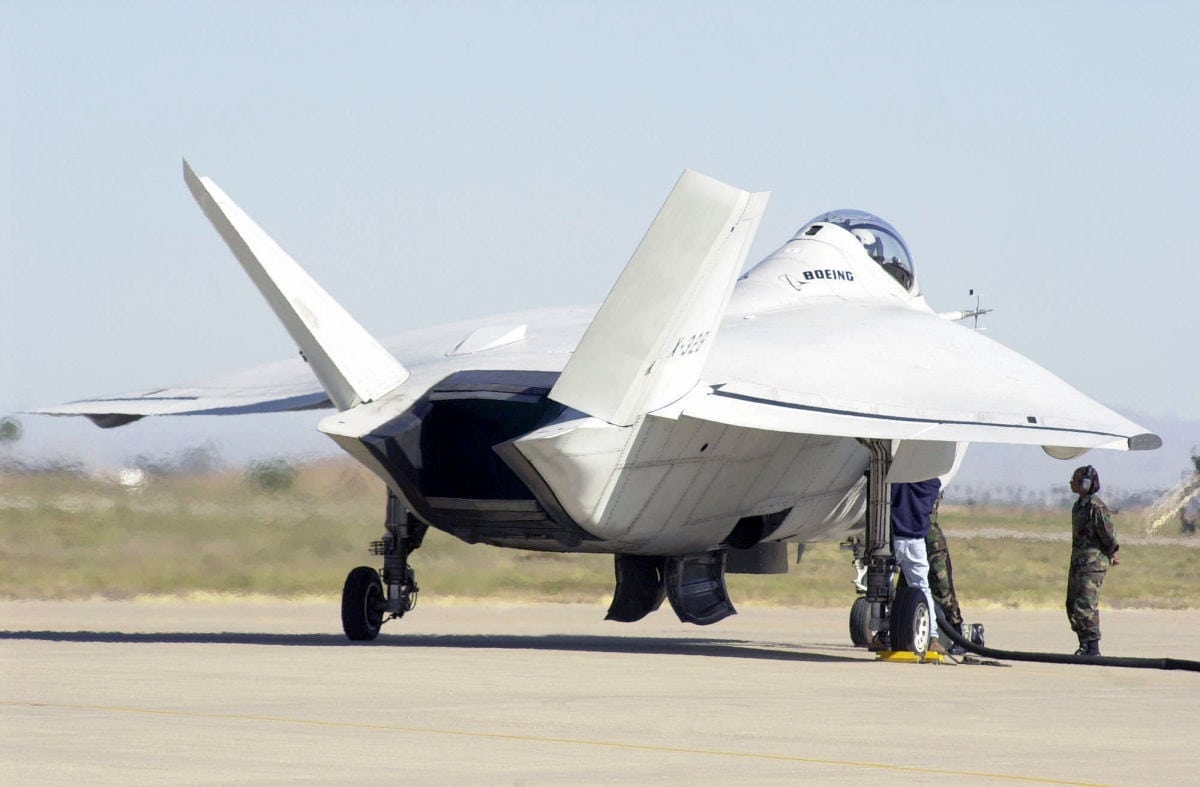 The Boeing Joint Strike Fighter (JSF) X-32B fills-up at a “hot pit” refueling station at Luke AFB during a cross-country trip. The X-32B is making a trip across the United States, making other stops along the way. 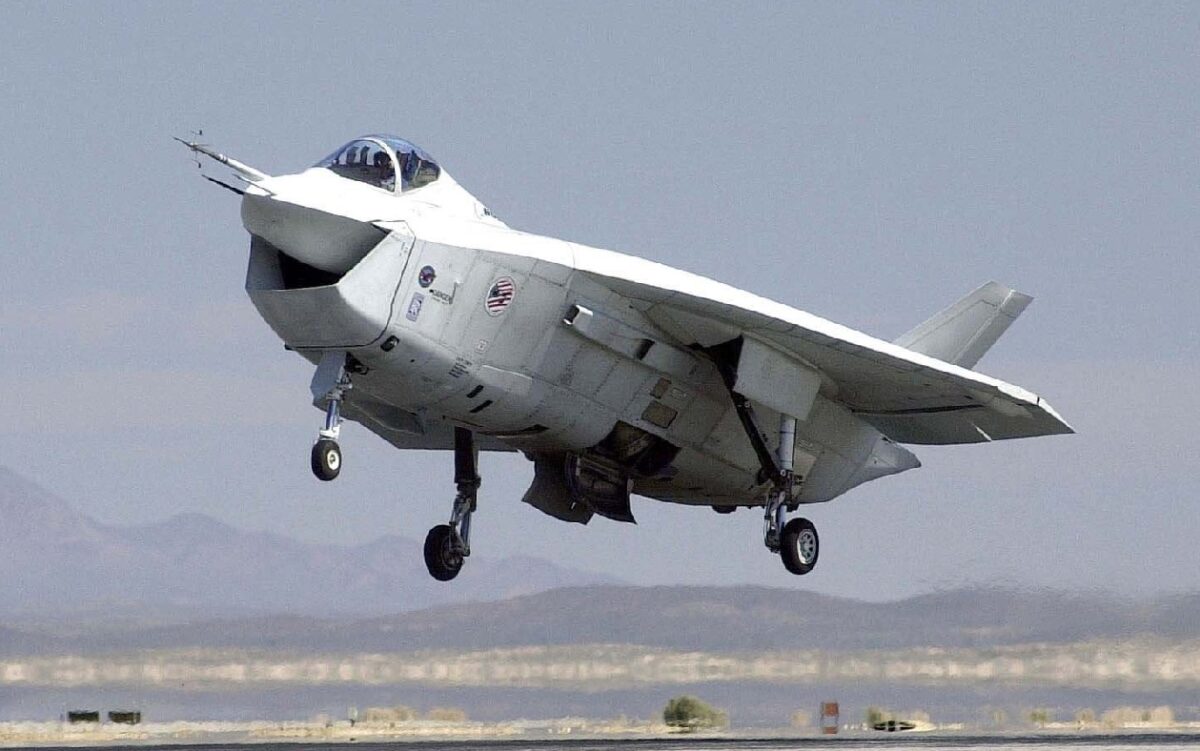 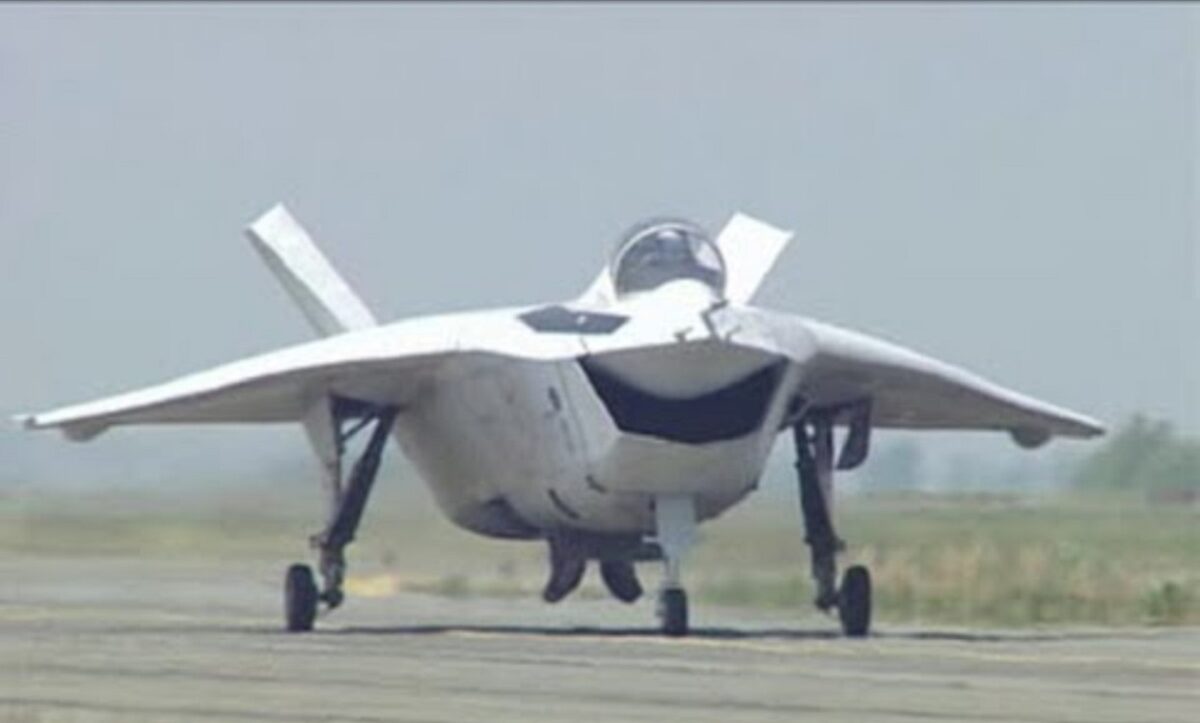 Though it failed to “make the team,” so to speak, the X-32 does live on, at least as a museum piece, thus assuring it some degree of “gone but not forgotten” status. Since 2005, the X-32A has been housed at the National Museum of the United States Air Force on the grounds of Wright-Patterson Air Force Base (near Dayton), Ohio.  Meanwhile, during that same year, the X-32B was given a new loving home at the Patuxent River Naval Air Museum adjacent to NAS Patuxent River in St. Mary’s County, Maryland. The A model is currently undergoing restoration, whilst the B model has already been restored and is currently on display.