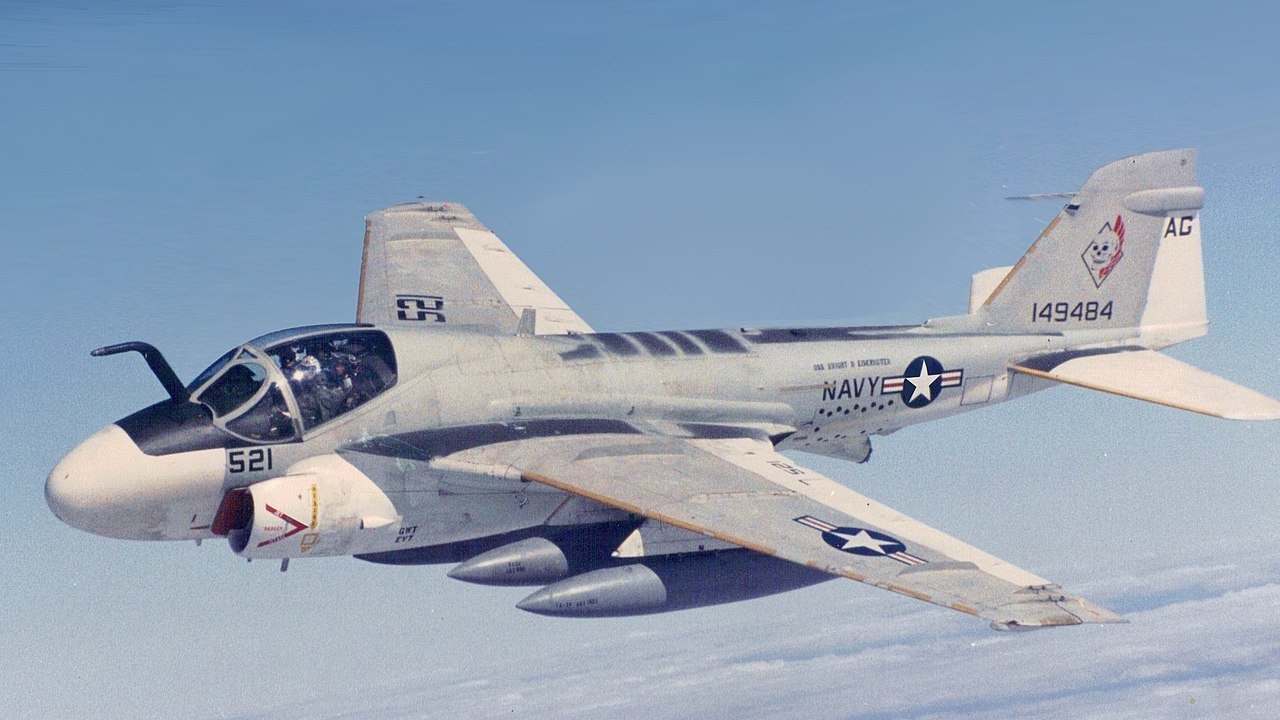 “Fighter pukes make movies. Bomber pilots make history!” Ironically, the first time I heard this saying was actually in a movie, that being 1991’s Flight of the Intruder, starring Willem Dafoe, Danny Glover, and the late Brad Johnson (not to be confused with the QB who led the Tampa Bay Buccaneers to their first Super Bowl title during the 2002 season). The film was based upon a bestselling novel by Stephen Coonts, himself a former real-life pilot of the eponymous plane, the Grumman A-6 Intruder. Let’s now take a closer look at the life of the intrepid Intruder.

The A-6 made her maiden flight on 19 April 1960 and was officially introduced into USN/USMC service in 1963, making history (bad pun intended vis-a-vis the movie quote in my opening paragraph) as the first all-weather attack aircraft ever. The cockpit configuration was unusual in that it used a side-by-side seating arrangement, wherein the pilot sat to the left of the bombardier/navigator. By contrast, in most two-seater jets, like the F-14 Tomcat or the F-15E Strike Eagle, the navigator sits directly behind the pilot.

As noted by my 19FortyFive colleague Harrison Kass, “(T)he Bureau of Aeronautics called for an all-weather attack aircraft with short takeoff and landing capabilities – something the Navy could use for long-range interdiction missions, something the Marine Corps could use for close air support. The A-6 was intended to replace the Douglas A-1 Skyraider. The A-1, designed during World War II, was the last piston-engine fighter/attack aircraft still in service with the U.S. An anachronism by the 1960s, the A-1 managed to stay in service until 1973 when, amidst emerging fourth-generation jet fighters, the A-1 was positively archaic.”

One thing the A-6 had in common with the A-1 was subsonic speed, maxing out at Mach 0.83 (640 mph/1,029 kph). Unlike the A-1, this jet didn’t carry any air-to-air defensive armament. As Mr. Kass indicates, the Intruder didn’t quite totally replace the Skyraider.  However, that doesn’t mean that the A-6 was a failure. Quite the contrary; the warbird gave 34 years of exemplary service, from Vietnam to Lebanon to Libya to Iraq to Bosnia.

The A-6 could carry up to 18,000 pounds (1,600 kilograms) worth of bombs, which prompted the North Vietnamese to dub them “miniature B-52s.” However, the U.S. Navy and Marine Corps pilots who flew the Intruders over ‘Nam paid a stiff price in exchange for the damage that they inflicted on the Communists. Since they generally flew a low-altitude mission profile—ofttimes at tree-top level—the planes were fairly easy targets for North Vietnamese Army (NVA) and Viet Cong (VC) triple-A gunners and SAM launchers, as well as North Vietnamese Air Force MiGs.

A total of 84 Intruders were lost to all causes during the war; 10 shot down by SAMs, two killed by MiGs, 16 to “operational causes” (read: non-combat mishaps), and 56 to conventional ground fire and AAA.

The A-6’s first significant post-Vietnam action was in support of the Multinational Force in Lebanon in 1983. One Intruder was shot down by Syrian forces, resulting in the death of pilot Lieutenant Mark Adam Lange and the capture of bombardier/navigator Lieutenant (now retired Commander) Robert O. “Bobby” Goodman, who was held captive for 30 days. Three years later, A-6 Intruders would participate in the Operation Eldorado Canyon bombing raids against Libya, this time without any losses incurred.

Fast forward another 5 years (or 4 years and 9 months if y’all really want to nitpick) to 1991’s Operation Desert Storm, and the Intruder was a key participant, serving as the Navy’s primary strike platform for delivering precision-guided munitions (PGMs), flying more than 4,700 combat sorties against Iraqi air defenses, naval units, and strategic targets. Three A-6s were shot down by Saddam Hussein’s AAA and SAMs. From a personal standpoint, of all the American aviators who became POWs during the Gulf War, the one etched most prominently into my memory (I was 15 years old at the time) was then-LT Jeffrey Zahn, an Intruder pilot who was used as a propaganda pawn by his captors, paraded in front of Iraqi TV cameras whilst coerced into reading statements denouncing the war effort.

Final Flights of the Intruder

The A-6’s last combat action was with the USN over Bosnia in 1994. The Marine Corps had already retired the A-6E the year prior, and the Navy followed suit on 28 February 1997. However, the Intruder had in turn spawned an electronic warfare (EW) variant, the EA-6B Prowler, which remained in service until 2019 and remarkably incurred nary a single combat loss.

A total of 693 Intruders were built. Surviving static displays can be found at aviation museums throughout the United States, including the Steven F. Udvar-Hazy Center in Chantilly, Virginia, and the Flying Leatherneck Aviation Museum, which is currently in the process of relocating from El Toro to Irvine, Orange County, California.