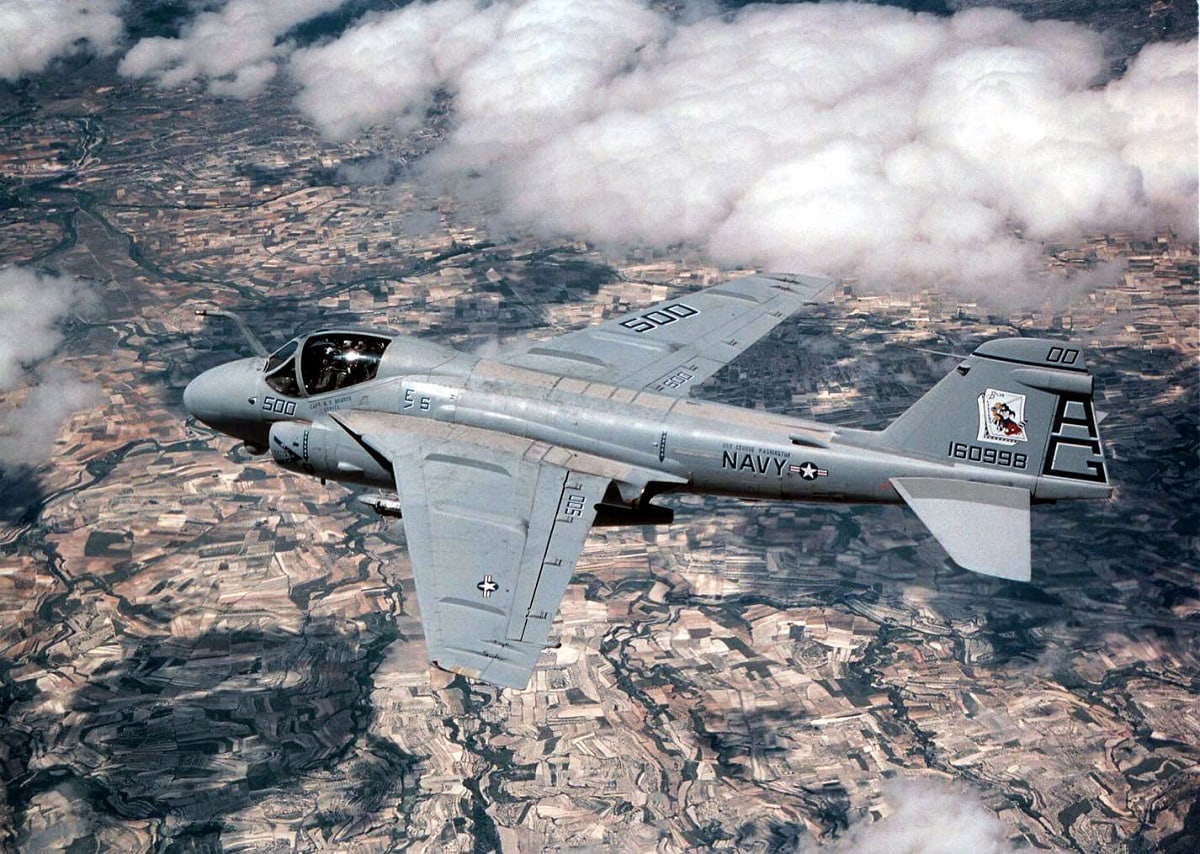 An A-6E Intruder aircraft navigates over the Spanish countryside during a low level training mission in support of Exercise MATADOR, a combined/joint US and Spanish exercise.

When I was a kid, fixated with military aviation, one plane, in particular, held my attention. It wasn’t the angular F-16 Fighting Falcon or the Top Gun-starring F-14 Tomcat. It wasn’t the BatManesque B-2 Stealth. For whatever reason, my favorite plane, without question, was the rounded, somewhat dopey-looking A-6 Intruder, an all-weather attack aircraft first flown in the 1960s.

Unfortunately, during my childhood in the 80s and 90s, the A-6 was already in the twilight of its service life. Retired in 1997, the tough and simple A-6 has since mostly faded into the annals of aviation history, despite its 36-year run as a reliable craft in service with both the U.S. Navy and U.S. Marine Corps.

The A-6 began to take form in the late 1950s when the Bureau of Aeronautics called for an all-weather attack aircraft with short takeoff and landing capabilities – something the Navy could use for long-range interdiction missions, something the Marine Corps could use for close air support. The A-6 was intended to replace the Douglas A-1 Skyraider. The A-1, designed during World War II, was the last piston-engine fighter/attack aircraft still in service with the U.S. An anachronism by the 1960s, the A-1 managed to stay in service until 1973 when, amidst emerging fourth-generation jet fighters, the A-1 was positively archaic. The A-1 lives on today as the root source of the A-10 Warthog.

Excited by the advent of turbine engine technology, the Navy was eager to replace the A-1 with a jet that didn’t have the A-1’s fair-weather limitations. The Navy’s call for a replacement issued a series of design requirements, which in sum equated to a close air support attack bomber that could operate in any weather environment. Eleven design proposals from eight companies were submitted. Boeing, Lockheed, North American, Bell, and Douglas all vied for the contract. Grumman, who would soon design the Lunar Excursion Module, walked away with the contract.

Shaping the A-6 with Innovative Design

When the A-6 entered service in 1963, the jet was billed as the first all-weather attack aircraft ever. The A-6 was unusual in that it used a side-by-side seating arrangement. In the A-6 cockpit, the pilot sat to the left of the bombardier/navigator, whereas, in most two-seater jets, like the F-14 or the F-15E, the navigator sits directly behind the pilot. The A-6 also featured a clever, futuristic instrument that helped the plane operate in all conditions – a Vertical Display Indicator (VDI). The VDI projected a synthetic representation of the landscape in front of the A-6, greatly aiding in navigation.

Unlike most jets being designed in the second half of the twentieth century, the A-6 was not capable of supersonic speeds. With a max speed of 640 miles per hour, a climb rate of 7, 620 feet per minute, a service ceiling of 42,400, and a g-limit of 6.5, the A-6 was not built to break any performance records. Rather, the A-6 was designed to carry plenty of ordinance and to arrive at the intended target, regardless of the weather. And indeed, the A-6 could carry ordinance. With five hardpoints, each capable of hefting nearly two tons, the A-6 had a nine-ton payload limit.

The A-6 was used extensively during the Vietnam War. The Intruder’s specs and abilities proved invaluable to U.S. war efforts, although the plane, which generally flew a low-altitude mission profile, was particularly vulnerable to Viet Cong anti-aircraft fire. In total, 84 A-6s were shot down during the war, condemning many A-6 pilots to suffer as prisoners of war.

In the 1990s, as the armed forces began to emphasize the consolidation of mission profiles into single platforms, the narrowly-purposed A-6 was phased out, its ground-strike mission overtaken by F-14’s outfitted with a LANTIRN navigation and targeting pod. Today, you can see the A-6 on display, from coast to coast – its soft edges and rounded features concealing the jet’s destructive power.