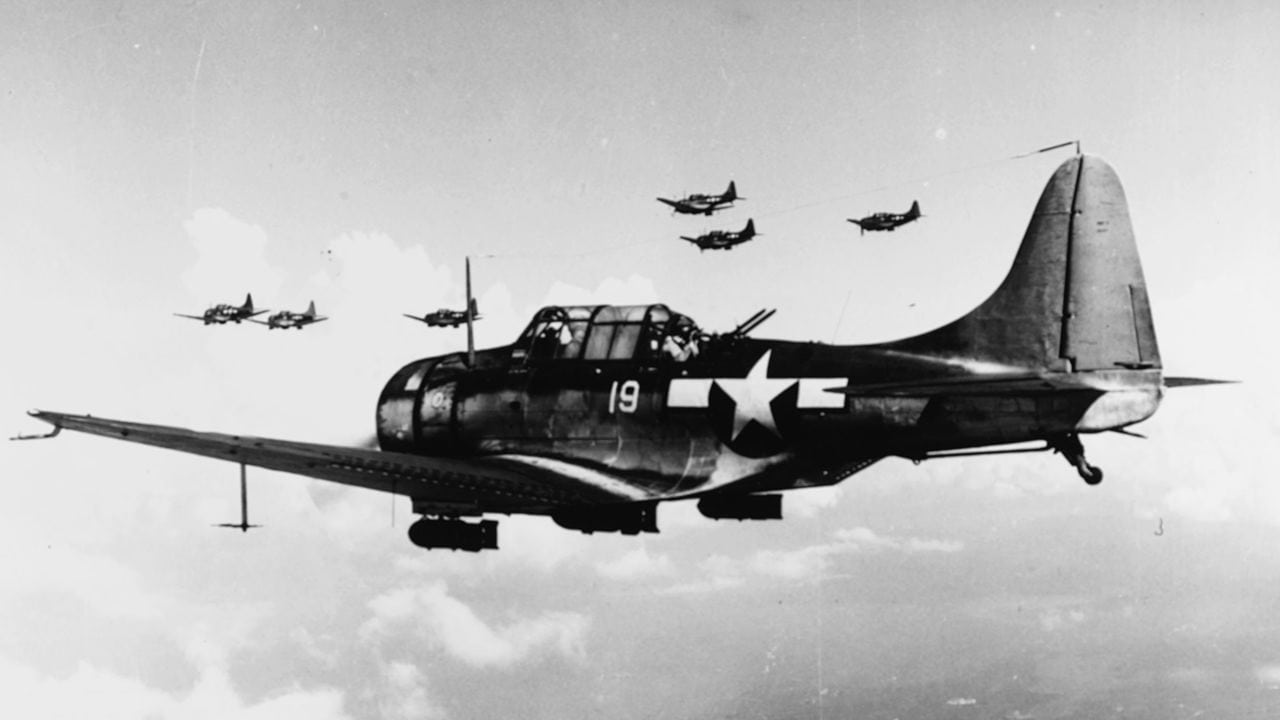 The Second World War brought about a sea change—if you will—in the approach toward naval warfare tactics and strategy (Yes, starting off with a bad pun right off the bat.). Instead of ship-to-ship gunnery broadside engagements between “capital ships,” i.e. battleships, the brunt of war fighting at sea would be taken up by (1) submarines and (2) naval aircraft. No other naval aircraft represented that second component quite like the Douglas SBD Dauntless dive bomber.

The SBD made her maiden flight on April 22, 1938, and officially entered service the following year. The deadly efficacy of dive-bombing, as proven by Nazi Germany’s infamous Junkers Ju-87 Stuka during Hitler’s invasions of Poland and France, instilled an additional sense of urgency in the U.S. Navy. A total of 5,936 were built, spread out across six different variants.

The majority of aircraft went to the Navy and Marine Corps, but the plane was also adapted by the U.S. Army Air Forces under the designation A-24 Banshee. The iconic plane also ended up seeing service with the Free French Air Force and the Royal New Zealand Air Force.

The Dauntless’ status as a game-changer was firmly cemented at the Battle of Midway in June 1942, whereupon the SBD-3 variant of this legendary warbird sank the four Imperial Japanese Navy (IIJN) aircraft carriers Akagi, Kaga, Sōryū, and Hiryū, thus turning the tide of the Pacific Theatre of Operations in WWII. For good measure, SBD-3 pilots also participated in sinking the heavy cruiser Mikuma and severely damaging the heavy cruiser Mogami. But this amazing warbird’s reputation was established even before Midway and continued to earn accolades in many a battle thereafter.

One month before Midway, there was the Battle of the Coral Sea, which, though not as momentous as the Battle of Midway, nonetheless provided the United States with its first significant strategic victory against the IJN juggernaut. Herein, Dauntless pilots, in tandem with Douglas TBD Devastator torpedo bombers, sank IJN light carrier Shōhō, America’s first carrier kill of the war, thus prompting the famous radio broadcast “Dixon to carrier. Scratch one flattop!”

The Dauntless – with its 1,000-pound bomb mounted underneath the centerline of the fuselage and two 100-pound bombs carried under outer wing pilings – ended up sinking more Japanese ships in the Pacific than any other Allied aircraft, from Guadalcanal to Rabaul to the Eastern Solomon Islands. During Guadalcanal in particular, the battleship Hiei was among the victims. The Dauntless made its fair share of contributions in the European Theatre of Operations as well, particularly during Operation Torch in 1942, during which time its crews sank the Vichy French battleship, Jean Bart.

Being built as a dive bomber, the SBD was definitely not intended by her designers to be a dogfighter. Yet amazingly the Dauntless stands out as the only WWII bomber with a positive kill ratio against enemy aircraft. Not even the heavily armed B-17 Flying Fortress can make this claim. Neither can either one of the Axis’ counterpart dive bombers, the aforementioned Stuka or Imperial Japan’s Aichi D3A1 “Val”. Ergo, the Dauntless merited her “Slow But Deadly” sobriquet in more ways than one.

The Douglas SBD Dauntless was officially credited with 138 air-to-air victories vs. 43 losses of their own. Mind you, this wasn’t just accomplished by the SBD’s rear gunners with their swivel-mounted .30 caliber machine guns, but also by the pilots themselves who made good use of the plane’s forward-firing, cowling-mounted Browning .50 caliber machine guns. The single most successful Dauntless crew in air-to-air engagements was the tag team (so to speak) of pilot then-Ensign John Leppla and his gunner Radioman 3rd Class John A. Leska, who, during the Battle of Coral Sea, shot down a combined seven Japanese warplanes; four for Leppla and three for Leska. Tragically, Leppla did not survive to see the end of the war, as he was KIA during the Battle of Santa Cruz in October 1942.

The most famous dogfighting Dauntless pilot who did live to tell his tale was the legendary Stanley “Swede” Vejtasa, who, as a young Lieutenant (j.g.), managed to score not one not two, but three kills in a single engagement against the vaunted Japanese A6M2 Zero, the most feared Japanese fighter plane during the war due to its combination of speed, maneuverability, and armament. To gain a fuller appreciation of the near-impossibility of what “Swede” accomplished against the three Zeroes – a feat which earned him the Navy Cross – I highly recommend you view this History Channel video.

The Douglas SBD Dauntless saw her last significant action as a carrier-borne plane during the Battle of the Philippine Sea in June 1944, after which it was replaced by the Curtiss SB2C Helldiver. While the Helldiver was a superior aircraft to the Dauntless, its pilots hated it, and claimed that its alphanumeric designation stood for “Son of a Bitch, 2nd Class.” By contrast, the supposedly inferior SBD was loved by her crews.

Meanwhile, land-based Douglas SBD Dauntless remained in service with the USMC right up until the end of WWII. After the war, many of them were dismantled, but the Mexican Air Force actually kept its planes on duty until 1959. Sadly, fewer than 30 survive today, and only one of those survivors is from the Battle of Midway, which is on display at the National Naval Aviation Museum in Pensacola, Florida.

Even fewer are airworthy, but “few” is certainly better than none. For hardcore aviation buffs who’d like the opportunity to actually ride in one and have money to burn, for a measly $995.00 to $1,395.00, you can do so in an SBD-5 variant thanks to Commemorative Air Force (CAF) Airbase Georgia down in Peachtree City, GA. From a personal standpoint, the Douglas SBD Dauntless happens to be my favorite WWII warbird (and very close second only to the B-52 as my all-time favorite warplane), so this is definitely a bucket list item for me.