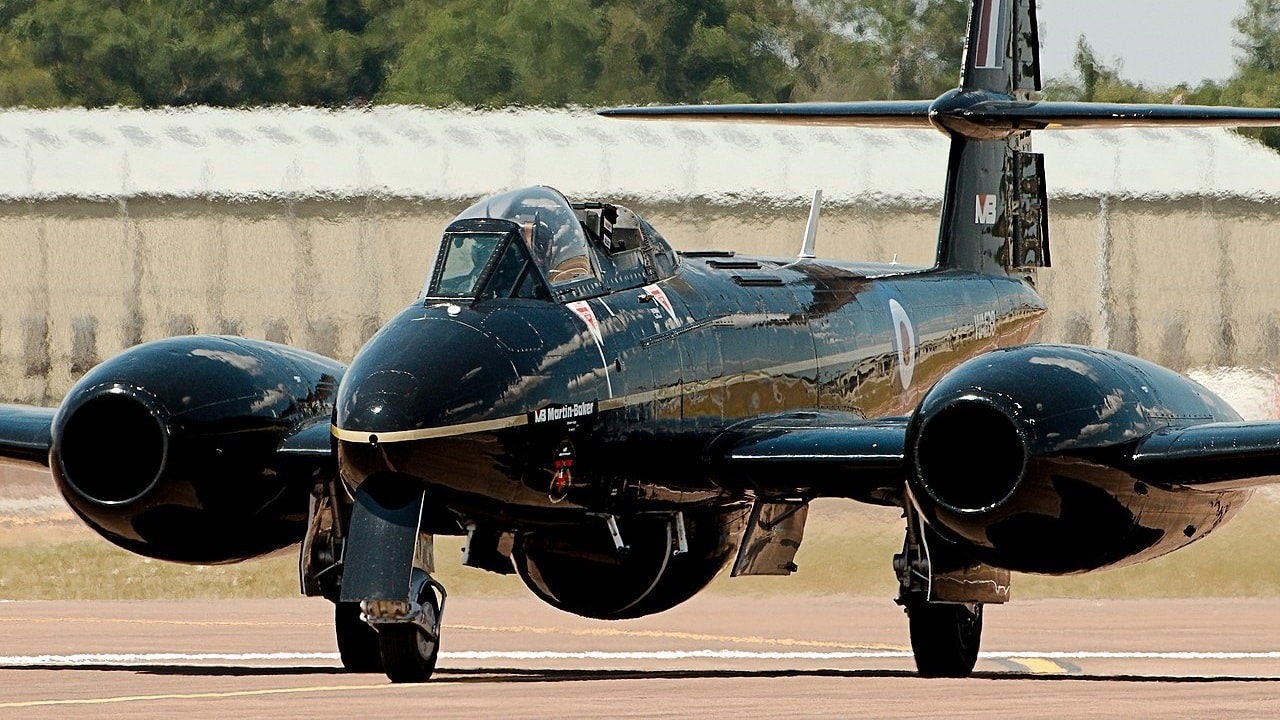 The Gloster Meteor remained in service after the war, and a total of 3,875 were built – far more than any other British jet aircraft of the era.

When one thinks of WWII jet fighters, the image that naturally comes to mind is the Luftwaffe’s Messerschmitt Me-262 “Schwalbe,” or “Swallow”. This makes sense, as it was the only jet fighter in the conflict to engage in air-to-air combat, much to the chagrin of the B-17 Flying Fortress crews who were on the receiving end of the Schwalbe’s wrath. The Americans, for their part, never got their underwhelming Bell P-59 Airacomet into wartime service. But what remains relatively unsung in the annals of WWII jet fighter history is that Great Britain did manage to enter its own contender: the Gloster Meteor.

As these words are being written on the same day that US-UK Friendship Day is being celebrated at Nationals Ballpark in Washington, DC, let us now grant the Meteor a well-earned turn in the spotlight.

As noted by my 1945 colleague Peter Suciu, a likely reason for the Meteor’s relative lack of notoriety is that the RAF warbird never faced manned enemy aircraft. It was instead initially tasked with the vital but far less glamorous task of going after an unmanned terror weapon, Nazi Germany’s infamous V-1 “buzz bomb” rockets. In that role, the Gloster jet was not a total failure, tallying 13 kills against the buzz bombs. But that number pales in comparison to the more than 600 V-1s downed by the prop-driven, all-wood de Havilland Mosquito.

What is also often overlooked is that while the Me-262 made its maiden flight far earlier than the Meteor —July 18, 1942, versus March 5, 1943—the Brits were only three months behind when it came to the aircraft’s actual operational debut: July 1944 versus April 1944.

One key reason the Schwalbe and Meteor never went head-to-head was that Meteor pilots were forbidden at first from flying over Nazi-occupied territory. British war planners feared that a downed British asset could be captured by the Germans or the Soviets. Eventually, Meteor pilots were credited with destroying more than 45 German aircraft via ground strikes.

Further hampering the Meteors was their engines’ vigorous consumption of petrol, which they ran through quickly enough to limit the aircraft’s range to 600 miles (970 km). The Me-262 was also a gas-guzzler, with a range of some 650 miles, but at least it was taking off from home territory. For further comparison, the Schwalbe’s top speed of 540 miles per hour was significantly faster than wartime versions of the Meteor, which hit 415 mph – though later versions of the British bird would hit 600 mph. The Meteor had more reliable engines, while the German Swallow had the more powerful armament—four 30mm Mk 108 cannon versus four 20mm Hispano cannon.

The Roots of the Meteor

The development of the jet is credited to Wilfred George Carter (1889-1969), aircraft engineer and chief designer at Gloster Aircraft Company, who began his work as early as 1940, with turbojet technology still in its relative infancy. The British Air Ministry wanted a single-seat, jet-powered interceptor to counter German bombers, which were considered a serious threat – a perception validated by the London Blitz of 1940-1941. To cite Suciu again: “Much like the design for the Me-262, Carter opted for twin engines, but those were mounted to the aircraft’s straight-wings compared to the swept-back wings. The cockpit position in the Meteor was allocated to the forward portion of the fuselage however, which provided good all-around views.”

While the Germans rushed the Me-262 into production in a desperate effort to turn the tide of the air war in Western Europe, Carter and his crew were slow and methodical in the development of the British counterpart. The Allies emphasized safety over speed of production and deployment. The Meteor would thus end up getting the last laugh on the Swallow in terms of total production, with 3,875 of the former built, compared to 1,430 of the latter.

The Gloster Meteor also outdid its German counterpart in longevity. It saw jet-to-jet combat in the hands of Royal Australian Air Force pilots during the Korean War. The Meteor was unfortunately outclassed there by the Communists’ MiG-15, so the Gloster jet was soon relegated to an air-to-ground role. It flew 4,800 total sorties with a loss of 30 aircraft. RAAF Meteor pilots did manage to nab six air-to-air kills against the MiG-15. Sgt. John Hale won the last such encounter in March 1953, which still marks the RAAF’s last air-to-air combat operation.

Interestingly, both Israel and Egypt would use the Meteor in combat during the 1956 Suez Crisis. It was here that the Meteor earned its greatest air-to-to air combat bragging rights. During Operation Tarnegol on Oct. 28, 1956, Israeli Air Force pilot Yoash “Chatto” Tzidon downed an Egyptian Ilyushin Il-14 carrying high-ranking members of the Egyptian General Staff.

While Britain and Australia retired their Meteors in the mid-1950s, the venerable warbird saw operational service with Ecuador’s air force as late as the 1980s. The last of the airworthy Meteors made its final flight at Bruntingthorpe Airfield in Leicestershire in January 2019. Surviving static displays can be found in 16 different countries, predominantly in the United Kingdom. The one I’ve seen in-person and can therefore highly recommend is at the RAF Museum London, in the Hendon section of that grand old city.