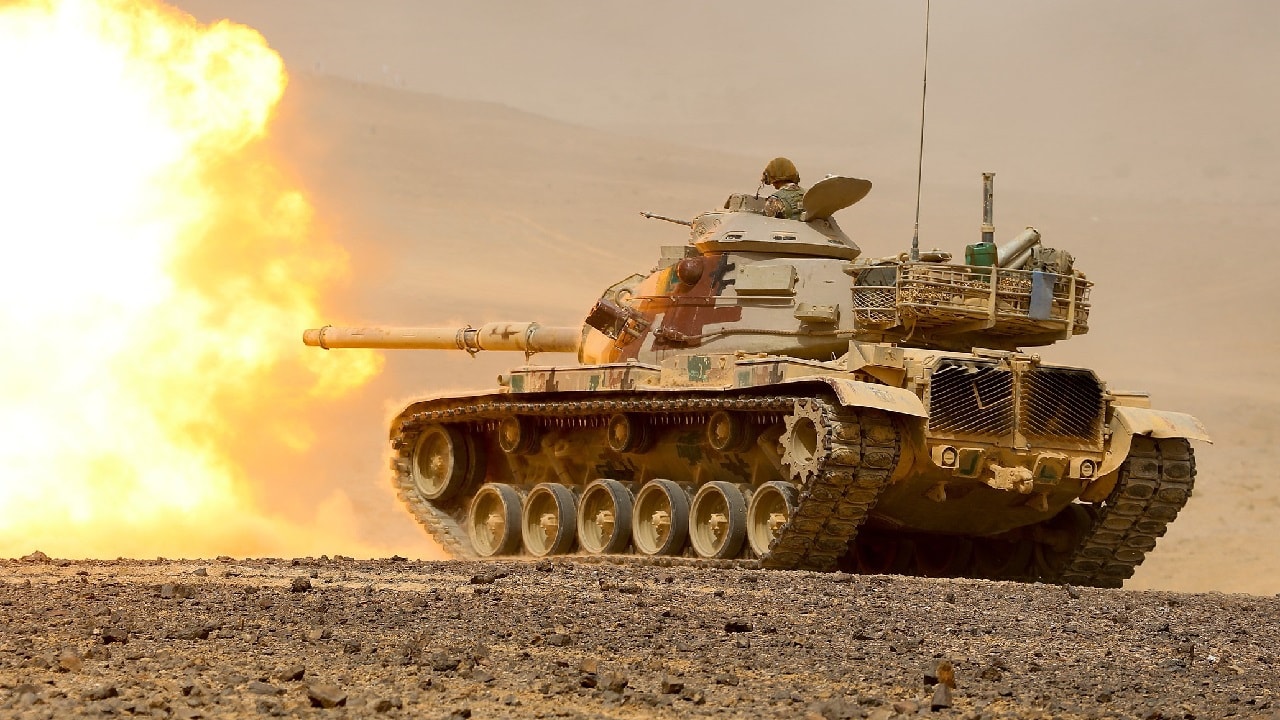 An M60A1 tank from the Royal Jordanian Armed Forces fires a round at a range in Wadi Shadiyah during a massive military demonstration in front of dignitaries and media.

The M60 Patton, Explained: Gen. George Smith Patton Jr. was known as a genius and a forward thinker when it came to tank warfare. It is thus entirely appropriate that there are not one, but four U.S. Army tanks that bear his name. (As a side note, this helped “modernize”—so to speak—the naming convention for American tanks, moving it from Civil War generals to 20th century generals.)

The last two Patton-christened tanks were the most historically significant. The M48 Patton was America’s first-generation main battle tank (as well as the tank that was fit for a king, or more accurately The King, Elvis). The M60 “Patton” second-generation main battle tank officially served in the U.S. Armed Forces from 1959 to 1997. It’s this latter “Patton” that we’re going to discuss here and now.

The M60 MBT – not to be confused with the M60 infantry machine gun (AKA “The Pig”) that served alongside the tank for 40 years – was officially designated the Tank, Combat, Full Tracked: 105mm Gun, M60, in March 1959. The vehicle was manufactured by the famous Chrysler Corporation.

The M60 incorporated a British-designed 105mm gun as its main gun and was thus able to destroy any known enemy tank – a sharp answer to the woes of the M4 Sherman’s 75mm gun against the armor of Nazi German Tigers during WWII. Secondary armament consisted of a 7.62mm machine gun and a Browning M2 “Ma Deuce” 50-caliber machine gun. The vehicle weighed in at 57 tons, boasting a top speed of 30 mph (48.2 kph) and a range of 300 miles (483 km).

The Mechanical General Charges Into Battle

Although built by Americans for Americans, the first country to actually use the M60 in combat was Israel, during the 1973 Yom Kippur War. Israel had both the M48 and M60 Patton – renamed Magach (מגח, “battering-ram”) – at her disposal during the war. A total 540 of these tanks tangled with the combined Arab armies’ Soviet-designed T-55 and T-62 tanks. The Israel Defense Forces, were caught napping during their highest holy day of the year (a major intelligence failure on the part of the Mossad), and they suffered severe armor and personnel losses, with the number of Patton tanks whittled down to a mere 200. However, through sheer determination fueled by desperation, the IDF Patton/Magach crews prevailed, working in tandem with compatriots in British-made Centurion tanks, destroying approximately 2,250 enemy tanks.

Israeli M60s also acquitted themselves well against Syrian tanks during the 1982 Lebanon War (a series of tactical victories that alas ended in strategic failure for Israel).

U.S.-crewed M60 Pattons saw their first combat usage during Operation Urgent Fury in Grenada in 1983, but didn’t encounter any enemy vehicles more powerful than Soviet-made BTR-60 armored personnel carriers. By far the biggest ever wartime usage for the American Patton crews would take place during Operation Desert Storm in 1991.

By this time the U.S. Army had transitioned from the M60 to the M1 Abrams MBT. However, the U.S. Marine Corps still had the Patton. More specifically they used the M60A3 TTS variant with a tank thermal sight that gave the crew the ability to pick out an enemy vehicle in the dark. This variant was also equipped with a meteorological sensor device that fed data directly into its ballistics battle movements. However, prior to the outset of hostilities against Iraqi forces, there were lingering concerns about whether even these upgrades would suffice against the then-vaunted T-72 MBTs of Saddam Hussein’s elite Republican Guard.

Suffice to say that the TTS devil dog crews passed the test. During the conflict’s epic tank-on-tank engagements such at the Battle of Medina Ridge and the Battle of Norfolk, the upgraded Pattons destroyed 100 enemy tanks while losing only one of their own.

The M60 was retired from U.S. military service in 1997. Regarding the Army’s transition to the M1, my friend Rick Bogdan, a retired Army LTC (and prior enlisted soldier) who commanded M60 units had this to say: “Ha! ‘More torque in reverse.’ On a serious note, when we heard about the M-1 we were excited until we heard how few rounds it carried vs M-60 given the ‘fight outnumbered and win’ doctrine. Plus, the 60 could at least cross bridges in Europe vs the M-1. So yes, our trusty M-60 with 5 tanks per platoon seemed to remain a good bet.”

For more of Rick’s perspectives on life as a Cold War tanker, check out his semi-autobiographical novel Grunts, Gramps & Tanks.

The venerable old tank – doing its”Old Blood and Guts” namesake proud – continues to soldier on in 17 different foreign countries, including Saudi Arabia, Thailand, Jordan, Taiwan, Greece, Egypt, and Turkey. Egypt has the largest fleet of Pattons, at over 1,000. Arguably, the most sophisticated variant is the Sabra Mk II wielded by the Turks, as explained by my 1945 colleague Harrison Kass:

“Turkey’s Sabra Mk II, has an upgraded main gun – the IMI MG252 – which is an Israeli smoothbore 120 millimeter L44 gun fused onto the M60’s turret. The upgraded Sabra also includes composite and explosive reactive-armor modules on the turret and hull. Turkey plans to continue upgrading their M60s, adding laser-warning receivers, a retractable mast with optics for area surveillance, and a remote-weapon station. Clearly, Turkey views the M60 as a system with potential for future use, especially along their border with Syria.”

For fellow museum buffs who aren’t planning a vacation in any of those countries anytime soon, you can find M60 Patton static displays at a variety of stateside museums, including the General Patton Memorial Museum in Chiriaco Summit, California, and the First Division Museum in Wheaton, Illinois.