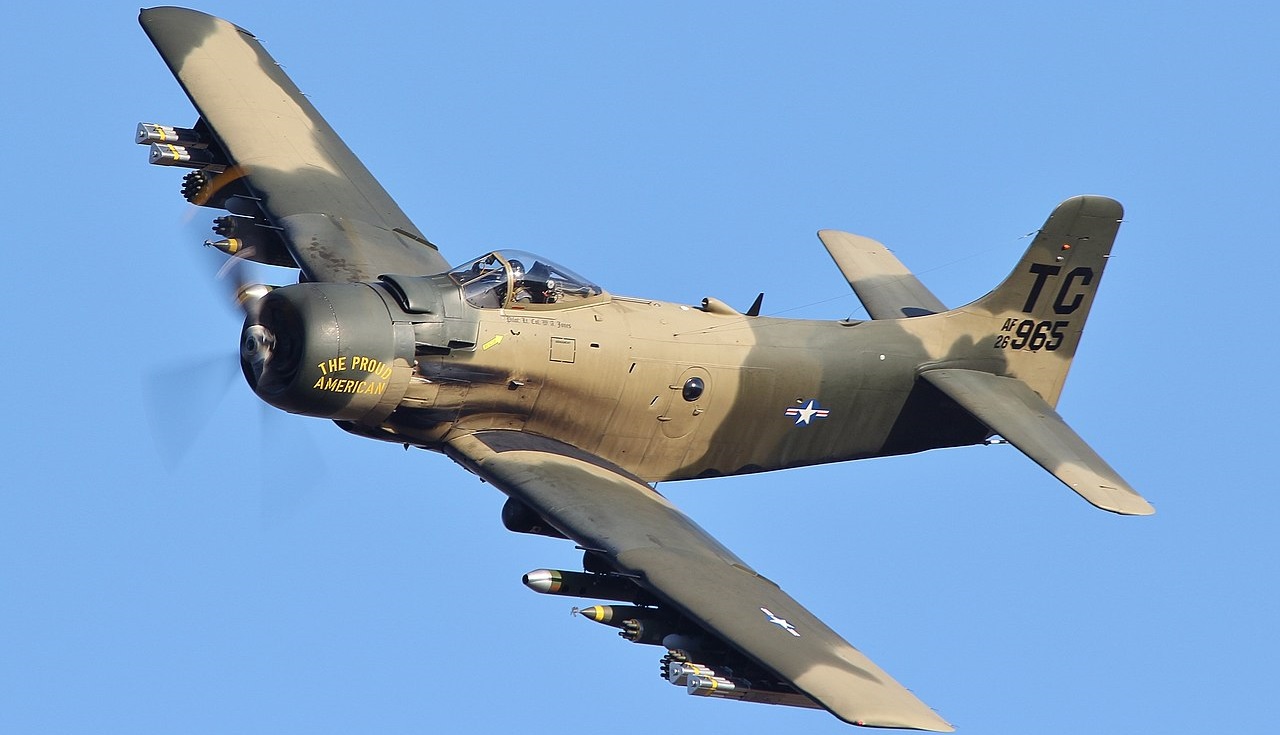 The Douglas A-1 Skyraider (AD-4NA, 126965) is flying. This aircraft is owned by Heritage Flight Museum.

Dating back to the 1970s and beginning in the 1950s, jet engines were standard in U.S. fighter/attack aircraft. Nearly without variation, new fighters like the F-109 Cougar, the F-102 Delta Dagger, and the F-104 Starfighter, were built around modern jet engines. Yet, in the early 1970s with Richard Nixon in the White House, NASA astronauts routinely exploring the lunar surface, and Robert Redford emerging in Hollywood, one U.S. attack aircraft still relied upon a propeller for thrust – just like the Wright Flyer had in 1903. Lingering stubbornly, an anachronism that refused to die, the Douglas A-1 Skyraider was the U.S.’s last-ever prop-driven fighter/attack aircraft.

Propelling Through Time with a Classic Airframe

The A-1 first flew while Hitler still ruled Germany, in March 1945. The piston-engined prop plane entered service the following year, beginning a remarkable service life that would overlap with sophisticated aircraft like the SR-71 Blackbird and the F-14 Tomcat.

The A-1 was a relatively simple machine. Designed to satisfy U.S. Navy requirements for a carrier-based, single-seat, long-range dive/torpedo bomber, the A-1 was meant to replace World War II airframes including the Douglas SBD Dauntless, the Grumman TBF Avenger, and the Curtiss SB2C Helldiver.

With completely straight, low-mounted, tapered wings, the A-1 had impressive maneuverability at low speeds. Each wing, somewhat large, had seven hardpoints and was able to heft 8,000 pounds of ordnance. The A-1 gained a reputation for precision. Capable of hitting difficult targets, like bridges or dams set against mountainous terrain, the A-1 relied on “toss-bombing” or “over-the-shoulder” bombing techniques.

What Kept the A-1 In the Air for So Many Service Years?

In addition to precision-attack talent, the A-1 was regarded for its ability to provide close air support. With high stability at low speeds and a long loitering time, the A-1 proved invaluable in supporting troops on the ground. In a low-flying role, the A-1 became famous for its ability to sustain damage and keep flying. The Skyraider was tough and durable and included extra armor plating around the cockpit to protect the pilot.

While the A-1 entered service too late to fly against Nazi Germany or Imperial Japan, the Skyraider became the lynchpin of U.S. efforts in the Korean War. The U.S. Navy and U.S. Marine Corps used the Skyraider as their primary attack aircraft; the prop-plane carried a higher payload and had a longer flying time than its jet-engine successors. To increase the Skyraider’s survivability during the Korean War, 618 pounds of additional armor plating, measuring 0.25-0.5 inches thick, was fused to the underside and sides of the aircraft’s fuselage. Still, over 100 A-1s were lost in combat.

The A-1 Flew Missions in Multiple Combat Zones

During the Vietnam War, U.S. forces enjoyed an abundance of jet fighters and attack aircraft. The A-6 Intruder, the A-7 Corsair II, the A-4 Skyhawk, and the F-4 Phantom. Still, war planners often elected the A-1 for demanding missions. The A-1 served admirably: striking ground targets, providing ground support, escorting search and rescue efforts, and shooting down MiG 17s on two occasions. The A-1 fleets, often charged with performing dangerous tasks, paid a heavy price, losing 266 aircraft over the course of the war.

Finally, in 1973, the U.S. phased the A-1 out of service – remarkably, just as still-relevant fighters like the F-14 Fighting Falcon and F-15 Eagle were coming into service. However, the A-1 flew with foreign air forces well into the 1980s. Today, the A-1 lives on as the design source for a contemporary attack jet.

Built directly from the A-1, the A-10 “Warthog” is visually and functionally similar to its WWII-era ancestor. With straight, tapered, low-slung wings, the A-10 has fantastic maneuverability at low speeds. With a titanium-encased cockpit and extra armor on the fuselage, the A-10 is tough and durable. Accordingly, just like the A-1, the A-10 is a close air support specialist, revered for its ability to protect troops on the ground. And like the A-1, the A-10 refuses to retire, proving too valuable and too cost-effective to mothball, despite becoming an observable, slow anachronism itself, in an age of fifth-generation, supercruising stealth fighters.

In this article:A-1, A-1 Skyhawk, A-10 Warthog, Aviation History, Korean War