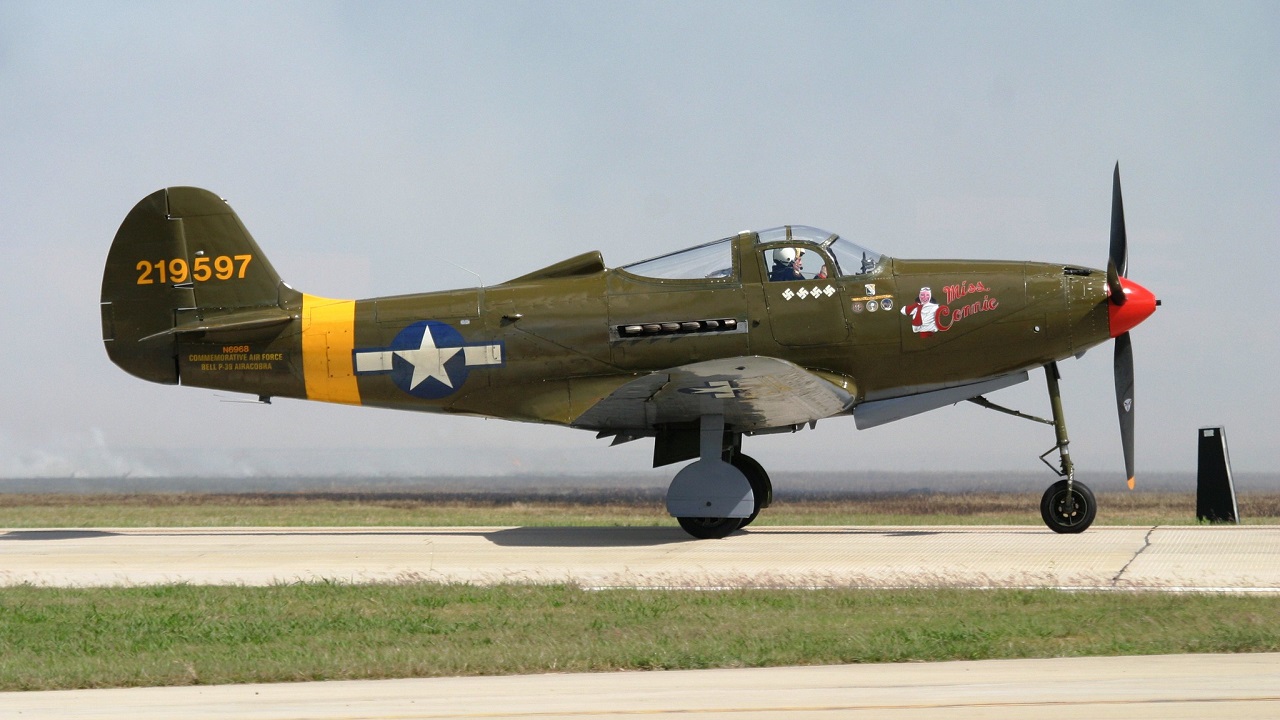 Fortunately for people with Ophidiophobia – an overwhelming fear of snakes – most snakes of the flesh-and-blood variety don’t fly. Yes, there are the so-called “flying snakes,” or more accurately gliding snakes, genus Chrysopelea, but they’re only mildly venomous, deadly to their small prey of lizards and rodents but harmless to humans. That said, back in WWII there was a mechanical “flying snake,” so to speak, that was very deadly to humans, as it spat its proverbial “venom” in the form of high-velocity lead projectiles. That aerial snake was the Bell P-39 Airacobra fighter plane.

Most Hated by the Americans…

“Don’t give me a P-39./The engine is mounted behind./They’ll tumble and spin and auger you in,/Don’t give me a P-39.” That is one of the verses from the humorous Air Force traditional drinking song “Give Me Operations,” most famously sung by Oscar Brand.

However, I actually first read the P-39 verse in particular in Chuck Yeager’s bestselling 1986 autobiography. The late great General Yeager was among the few WWII U.S. pilots who loved the Airacobra, and there is perhaps something poetic in this, as the plane was made by the same Bell Aircraft Corporation that made the legendary X-1 in which Chuck became the first man to break the sound barrier. As a sidebar note, Bell also produced the P-59 Airacomet, America’s first jet-powered airplane.

The Airacobra was certainly innovative in several ways: its Allison V-1710 engine was located amidships, i.e. at the center of gravity (hence the “engine is mounted behind” song line), a tricycle undercarriage distributed weight more evenly, and a nose-mounted 37mm cannon as its main armament – backed up by two Browning M2 .50 caliber nose-mounted machine guns and one more “Ma Deuce” apiece under each wing – which was way more powerful than the machine guns-only armament of the P-51D Mustang, P-47 Thunderbolt, and P-40 Warhawk, or even the 20mm cannon on the P-38 Lightning. It also had a good speed of 389 mph (626 kmh), though this somewhat disappointingly fell short of the 400 mph capability that its manufacturer had claimed.

Yet in spite of these unique and/or desirable features, most American fighter pilots – unlike Chuck Yeager – hated the P-39. A major reason for this American animus was the absence of an efficient turbo-supercharger, thus preventing it from high-altitude work. Also, the cannon could be a bit, shall we say, quirky sometimes. Moreover, the plane had limited range, and whilst it was actually faster and had better diving characteristics than the vaunted Japanese Zero, the Airacobra was inferior in climb and maneuverability.

Therefore, in head-to-head match-ups against the Zero between April and December 1942, 44 P-39s were shot down versus 15 Zeros killed. However, thanks to the protective armor and self-sealing fuel tanks of the American warbird (or would that be warsnake?), more than half of its pilots survived their shootdown, whilst 14 of the 15 pilots of the unarmored tinderbox Zeros were KIA. In spite of the plane’s flaws and the U.S. pilots’ contempt for it, five USAAF pilots became aces in the Airacobra according to one source, though other sources claim that there was only one American Airacobra ace (hey, triple-A, how’s that for alliteration?). The confirmed ace was then-1st Lt. Bill Fiedler.

As might be expected from an unpopular warplane, there is a relative dearth of books written by P-39 pilots (Chuck Yeager only briefly talked about it in his aforementioned autobiography), contrasted with the myriad of books written by Mustang, T-Bolt, and Warhawks drivers. One notable exception is Cobra Combat by retired USAF Lt. Col. Robert E. Case, who shot down a Japanese “Kate” torpedo bomber and a “Betty” medium bomber and sank both an Imperial Japanese Navy (IJN) destroyer and a barge. In spite of the many typos, the book is well worth the read. There’s also Nanette: Her Pilot’s Love Story by Edwards Park, which I haven’t yet read but the book has received rave reviews on Amazon.

…But Loved by the Soviets

Soviet pilots’ attitudes toward the P-39 were a night and day contrast to their American counterparts; the Reds absolutely loved the plane. Nearly 5,000 Airacobras were supplied to the Soviet Union in large numbers via the Land-Lease Act (‘collusion” jokes anyone?). It turned out that this flying snake was much better suited for the medium and lower altitudes where most Eastern European Front air combat took place. One Red Air Force’s Airacobra driver affectionally nicknamed it Kobrushka (“little cobra”) and Kobrastochka (a blend of “dear little cobra” and Lastochka, i.e. swallow).

Contrary to popular misconception, the Soviets did not use the P-39 primarily as a tank-plinking weapon, though the pilots often could and did use that powerful 37mm cannon to suppress artillery and antiaircraft batteries and disrupt German supply lines and land-based command centers. Nay, the Russkies indeed used the Kobrushka as an air-to-air fighter first and foremost. Thus the Airacobra, so unheralded and unloved in the West, enabled individual Soviet pilots to aggregate the highest number of kills attributed to any American-made fighter-type flown by any nation’s air force in any conflict. Eta pravilnya, tovarishiy (“That’s right, Comrades”), more than any of the other WWII Allied fighters mentioned earlier. As stated by Russian Beyond columnist Boris Egorov:

“Alexander Pokryshkin, Grigory Rechkalov, Alexander Klubov, Nikolai Gulaev, the brothers Dmitry and Boris Glinka, and other top Soviet aces all flew the American fighter. Pokryshkin, the second highest-scoring of all Allied fighter pilots, made 48 of his 59 kills with it, and Rechkalov 50 of 56. Even when faster and more maneuverable aircraft began to enter service with the Soviet Air Force toward the end of the war, many Soviet pilots remained faithful to their beloved Airacobra, which never let them down.“

After WWII ended, many P-39s were used as race planes by American private aviation enthusiasts. A fair number of these flying snakes survive today at museums around the globe, including several airworthy ones, such as Miss Connie, lovingly preserved and maintained by the Commemorative Air Force’s (CAF) CenTex Wing in San Marcos, Texas.