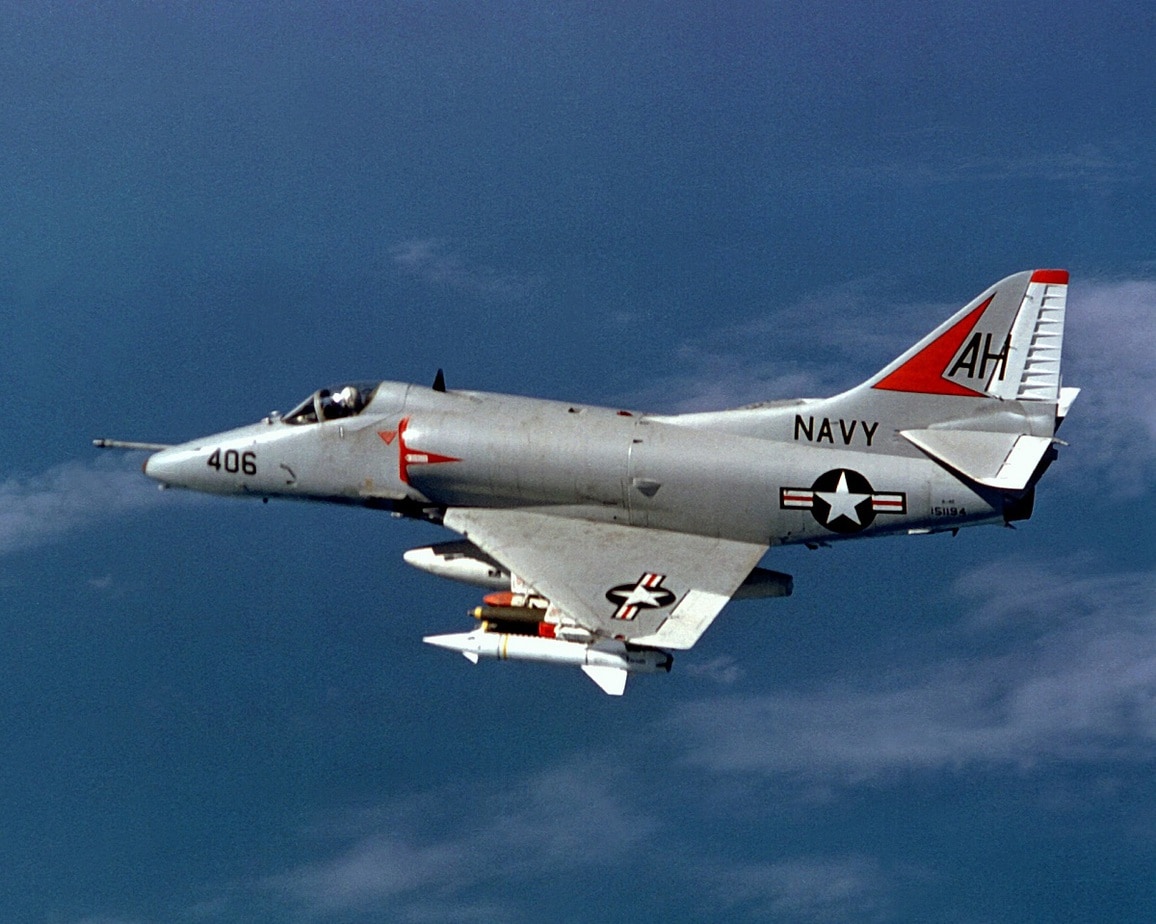 The Douglas A-4 Skyhawk has a few distinctive historical claims to fame. Perhaps the most famous example is the fact that a Skyhawk was flown by eventual U.S. Senator and 2008 Republican presidential nominee John McCain on the day of his shootdown that resulted in his harrowing 5.5-year experience as a POW in the infamous Hanoi Hilton.  But it turns out that the Skyhawk has an achievement record that goes above and beyond that unfortunate moment in history.

The A-4 Skyhawk Soars Into History

For starters, the A-4 was the first aircraft to drop ordnance in the Vietnam War. This occurred on 5 August 1964, during the Gulf of Tonkin Incident when U.S. Navy pilots attacked torpedo boats in North Vietnam, in retaliation for (admittedly disputed) attacks on the destroyers USS Maddox and Turner Joy.  In the process, the U.S. experienced its first combat loss of an A-4 when it was hit by anti-aircraft artillery (AAA) fire. The pilot, then-Lieutenant (j.g.) Everett Alvarez, who ejected safely but was then captured, becoming second longest-held U.S. POW of the war, and eventually retired from the Navy at the rank of Commander.

From that point onward, the Skyhawk ended up logging more Vietnam combat missions than any other naval attack aircraft, more than the A-6 Intruder or the A-7 Corsair II.  Along the way, the Skyhawk garnered only one air-to-air kill against the North Vietnamese Air Force, a MiG-17 “Fresco” taken down by an unguided Zuni rocket fired by an A-4C crew belonging to the USS Bonhomme Richard.  Coincidentally, it was a MiG-17 that scored the only air-to-air victory against the A-4 during that same war.

Much loved by their crews for their toughness and agility, Skyhawks would later be assigned to the trainer and adversary role for USN and USMC pilots, used as a role-player/surrogate for the MiG-17 at the Navy’s “Top Gun” school immortalized in the Tom Cruise movies. As an additional laurel, from 1973 to 1986, the A-4F Skyhawk was the aircraft flown by the Blue Angels.  The last of the Stateside Skyhawks were retired in 2003.

But the Skyhawk’s battle history doesn’t end there.

The A-4 Skyhawk as a Foreign Fighter

The Israeli Defense Forces (IDF) were the largest export customer of the A-4 Skyhawk, with an initial contract for 48 such warbirds ordered on 02 June 1966.  The Israelis quickly grew to love the Skyhawk just as much as their American counterparts did, adoringly renaming it the “Ayit” (Eagle, obviously not to be confused with the F-15 Eagle that later entered the IDF aerial arsenal).  The IDF pilots put their Ayits to heavy-duty use during the 1973 Yom Kippur War; of 102 Israeli aircraft lost, 53 were Ayits.

However, the Ayit drivers gave as good as they got.  As described in an August 2009 issue of Defense Industry Daily, “That war was not without its moments of distinction. In one engagement, an Israeli A-4 Ayit found itself facing 3 MiG-21s. The maneuverable little A-4 turned on them and brought 2 of them down, and was reportedly on the 3rd Fishbed’s tail when an IAF Mirage IIIC zipped through and blasted the MiG out of the sky.”

Whilst the Israelis were the largest foreign customer of the A-4, the Argentines were the first, with nearly 130 A-4s delivered from 1965 to 1970.  In a losing effort during the 1982 Falkland Islands War against Great Britain, Argentine Air Force pilots pulled off numerous feats in their Skyhawks, including the sinking of the HMS Coventry.  However, the Argentine Skyhawk pilots didn’t fare so well in aerial combat against the Fleet Air Arm’s Sea Harriers.

As far as Yours Truly can ascertain, the last nation to use the Skyhawk in major combat operations was Kuwait, during the 1990-1991 Persian Gulf War.  In response to Saddam Hussein’s initial invasion of their tiny country in August 1990, Kuwaiti Air Force pilots strafed an Iraq armored column of the al-Medinah al-Munawera Division, and shot down three Iraqi helicopters.  The Iraqis managed to destroy five A-4s and captured five others, but 29 Kuwaiti Skyhawks escaped, with 24 making their way to Saudi Arabia.  From there, under the auspices of the “Free Kuwaiti Air Force,” they flew 1,361 sorties during the liberation of their country.  Only one A4KU was shot down during that phase of the conflict, downed by a SAM; the pilot, Lt. Col. Mohammed “Mo” Al Mubarak, safely ejected and was taken prisoner.

After the war, the Kuwaitis sold their surviving Skyhawks to Brazil.  Amazingly, the Brazilians are still upgrading their A-4s and keeping them flying to this very day!

For the benefit of our U.S.-based readers who want to see a Skyhawk in-person but don’t have the time & money to fly down to Brazil, there are many great Stateside museums to choose, including the National Naval Aviation Museum at NAS Pensacola in Florida and the Estrella Warbirds Museum in Pasa Robles, California.

In this article:A-4, A-4 Skyhawk, US Navy, Vietnam War