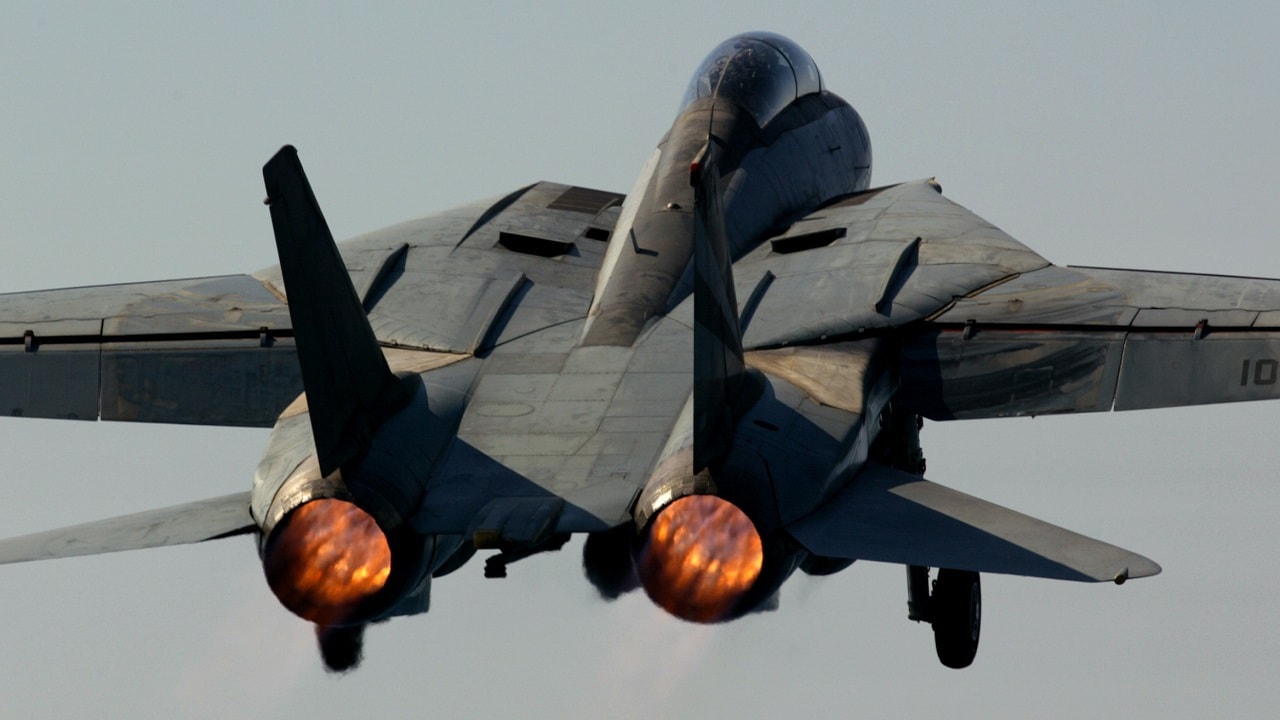 An F-14 Tomcat fighter jet takes off from the USS Kitty Hawk aircraft carrier in the Gulf April 2, 2003. Two aviators from the carriers F-14 squadron "Black Knights" were forced to eject during a mission over Iraq yesterday when both of their engines went down due to a mechanical failure. The pair was rescued by an Air Force Combat Search and Rescue Team. REUTERS/Paul Hanna PH

Spoiler alert: The new Top Gun movie has a scene in which Tom Cruise’s Maverick character flies an old F-14 Tomcat. I won’t divulge why, when, and where it appears in the sequel when this thing took off, but it is an ode to the Navy’s workhorse carrier-borne fighter that was the featured airplane of the first Top Gun. The Tomcat was renowned for its multi-role versatility, but it had its drawbacks that were not portrayed by Hollywood. Its original engines were on the weak side, and the powerplants had substandard fuel efficiency.

The first engines on the F-14 were built by Pratt & Whitney originally for the F-111B and A-7 Corsair. The Pratt & Whitney TF30 turbofan engines enabled 20,900 pounds of thrust and a speed of MACH 2.34. These engines burned a substantial amount of fuel, and the F-14 usually flew at a normal cruising speed to save fuel.

The TF30 was a handful though. The high-frequency blades were not reinforced. The engines could also be plagued by compressor stalls that resulted in dangerous spins. These and other problems led to the loss of 40 Tomcats. Even the Secretary of the Navy at the time, John Lehman, told Congress the TF30 engines had to go.

General Electric Gets Its Chance

So then the Navy, thinking it would have the issues fixed with a new engine, switched over to the General Electric F110-GE-400s in the updated F-14 in 1987. This was also the engine in the F-14Bs and Ds. This replacement helped as the fully-modern F110 engine is now being used by the F-15EX. So, the F110 engines on the Tomcat more than held their own. Carrier catapult launches were more effective. The F-14 could lose an engine and still climb. The F110 also weighed less than the Pratt & Whitney TF30, which helped with aerodynamics. Plus, the GE model was more fuel-efficient than the TF30.

Even with the improved engines, there was a problem with a lack of consistent funding for the F-14 program overall. The GE’s were just not replacing the older engines in all the F-14s the Navy-owned. As Alex Hollings of Sandboxx News wrote, “By 1996, nine years after the F110 entered service in the F-14, the Navy F-14 fleet included just 126 Tomcats with the new GE engines, while the other 212 were still flying on the troublesome TF30. In fact, F-14A’s running the TF30 were still flying for the Navy until as late as 2004.”

Hear It From a Naval Aviator

One F-14 pilot, Steve “Petro” Petroski, had a close call in 1983 flying in the South China Sea past Vietnam. He had engine trouble but made it back to the carrier in one piece with some nimble crisis management. “After maintenance personnel spun up the engine to trouble-shoot, they quickly realized that something was very wrong. Without the mechanical load normally carried by the tower shaft, the engine spun well past its normal rpm almost immediately.” Yep, engine problems again.

Did the RIO Help Avert Disasters?

It’s amazing that with the TF30 engine there were not even more accidents. But the naval aviators knew how to coax as much performance out of the F-14 in the safest manner as possible. I always wondered if F-14 pilots performed better or even safer with the back-seat radar intercept officers or RIOs on board. It seemed to me that with two cool heads in the airplane, problems could be mitigated before stalls resulted from the defective engines. I know, you’re saying, there’s only one pilot and the RIO’s job is weapons and communications, but still, two is maybe better than one in a crisis.

The Navy fully retired the F-14 in 2006 as the F/A-18E/F Super Hornet took its place. And as far as the Top Gun sequel – the Super Hornet is now the fighter of record but watch closely in the story for when the F-14 Tomcat flies again.