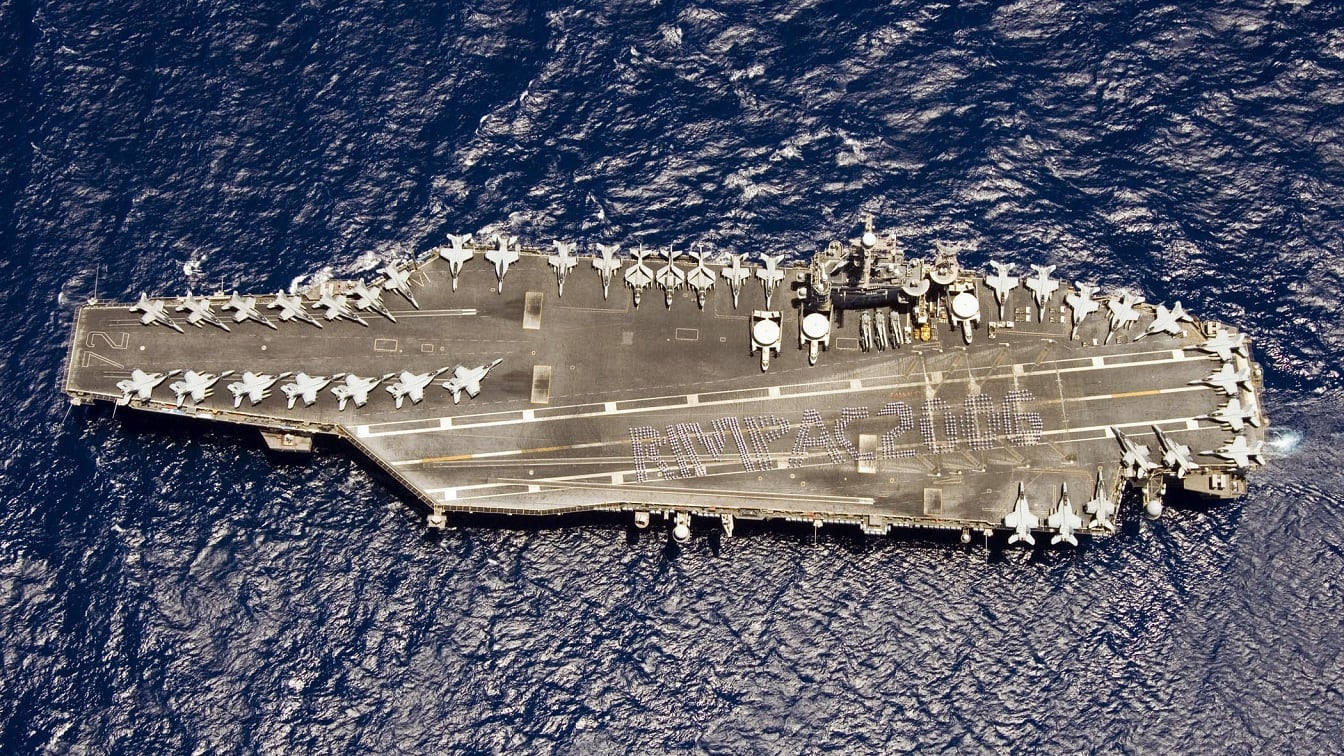 060725-N-7981E-170 (Jul. 25, 2006) Aerial overhead view of US Navy (USN) Sailors aboard the USN Nimitz Class Aircraft Carrier USS ABRAHAM LINCOLN (CVN 72) spelling out RIMPAC 2006 on the flight deck of the ship during a photo exercise during Exercise Rim of the Pacific (RIMPAC) 2006 in the Pacific Ocean (POC). The exercise is designed to increase the tactical proficiency of participating units in a wide array of combined sea operations. RIMPAC 2006 brings together military forces from Australia (AUS), Canada (CAN), Chile (CHL), Peru (PER), Japan (JPN), the Republic of Korea (KOR), United Kingdom (UK) and the United States (US). U.S. Navy photo by Mass Communication Specialist Seaman James R. Evans (RELEASED)

Russia’s so-called “special military operation” in Ukraine has sparked a renewed round of interest in the country’s military technologies and weapons systems, though admittedly a lot of that interest stems from morbid curiosity on account of their poor performance. Among the questions being raised is why Russia’s lone aircraft carrier, the Admiral Kuznetsov, isn’t being employed in the ongoing conflict. Well, it turns out that the Kuznetsov is beset with a whole host of maladies, from reliance on an ultra-thick, tarry black substance called Mazut as its power source, to a 2019 onboard fire that cost 300-350 million rubles in damages. This in turn begs an additional question: Why doesn’t Russia have a more modern nuclear-powered carrier?

Given Moscow’s developments in other facets of nuclear technology, from land-based nuclear refineries to nuclear submarines-such as the titanic Typhoon class – to nuclear ICBMs such as the new “Sarmat” – why haven’t they also been able to apply that industrial engineering knowhow to aircraft carriers? Well, as it turns out, the Russkies’ lack of a nuke-powered carrier certainly wasn’t due to a lack of effort or desire.

Back in the mid-1980s, the then-Soviet government conceived a supercarrier project known as Ulyanovsk, named after Vladimir Lenin’s hometown. As noted by columnist Paul Richard Huard explained, “Had she ever sailed, the Soviet supercarrier Ulyanovsk would have been a naval behemoth more than 1,000 feet long, with an 85,000-ton displacement and enough storage to carry an air group of up to 70 fixed and rotary-wing aircraft.”  For the basis of comparison, the U.S. Navy’s USS George H.W. Bush — the most modern and advanced flat-top of the improved Nimitz-class supercarriers — is roughly 1,100 feet long, with a displacement of 102,000 tons fully laden with ammunition and supplies, and a normal carrying capacity of 56 aircraft. The Russian carrier also boasted an impressive arsenal, including P-700 missiles and onboard surface-to-air missile systems.

The Ulyanovsk’s keel was laid in 1988, during which time the Soviet economy was already in dire straits, and three years before the collapse of the Soviet Empire. Even if the USSR hadn’t collapsed, this giant ship was such a large project that builders wouldn’t have finished her until the mid-1990s. Ironically enough, construction took place at the Black Sea Shipyard, aka Nikolayev South Shipyard 444, in Ukraine!

As a bit of gee-whiz historical trivia for you film buffs out there, that is the same shipyard from whence the famous Russian battleship Potemkin — scene of the famous 1905 naval mutiny and the subject of Sergei Eisenstein’s classic film — was launched.

But, of course, the USSR did indeed collapse, and with it went the funding to complete the construction of the Ulyanovsk. As Professor James R. Holmes, holder of the J.C. Wylie Chair of Maritime Strategy at the Naval War College, elaborates, “The Soviets weren’t dumb. They wouldn’t spend themselves into oblivion to keep up with the Joneses, and as a great land power, they had enormous claims on their resources to fund the army and air force. There was only so much to go around for ‘luxury fleet’ projects. Bottom line, if you can’t afford to keep the existing fleet at sea, where are you going to get the money to complete your first nuclear-powered supercarrier, a vessel that will demand even more manpower that you can’t afford?”

Fast-forward to the present day, and in the intervening years, Vladimir Putin has done much to modernize Russia’s armed forces in the intervening years since Boris Yeltsin replaced Mikhail S. Gorbachev at the end of the Cold War. Whilst Putin’s modernization program certainly included the Russian Navy, aircraft carriers still simply haven’t been a priority.

However, that may change soon, as Russian Navy Chief Admiral Viktor Chirkov recently went on public record proclaiming “The navy will have an aircraft carrier. The research companies are working on it.” Admiral Chirkov did not specify the size or capabilities of this new carrier, nor did he give an estimated timeframe for its keel-laying or its completion. Given the Russians’ recent failures to meet certain other military timeframes, especially pertaining to their “special military operation in Ukraine,” we probably shouldn’t be holding our collective breaths anytime soon.