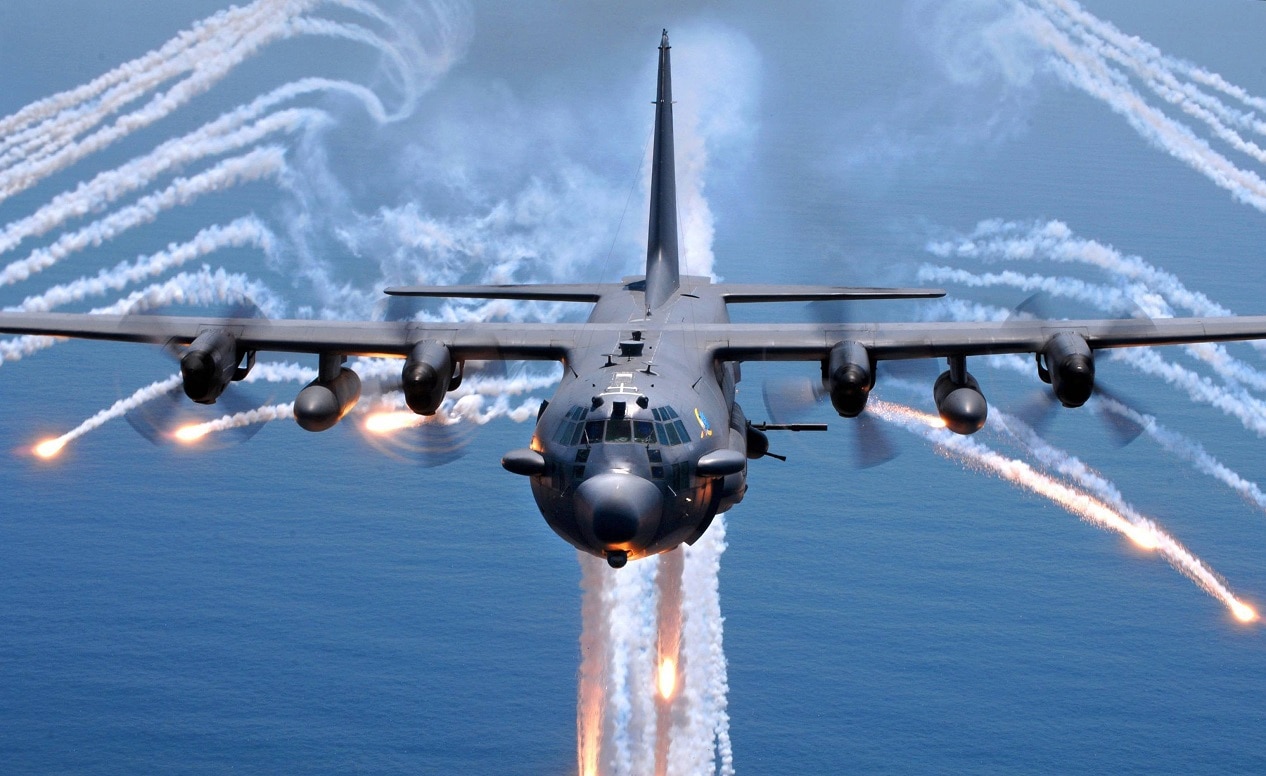 To fans of the James Bond/Agent 007 film and literary franchises alike (Yours Truly is a lifelong member of both categories), the name “SPECTRE” equates to the villainous Special Executive for Counterintelligence, Terrorism, Revenge, and Extortion, headed up by the nefarious Ernst Stavro Blofeld. To enemies of the United States, however, the word “Spectre” conjures up an even more ominous, and the very real prospect of “Death From Above”: the AC-130 gunship.

Before the AC-130 gunship, aka Spectre, came along there was “Spooky,” i.e. the AC-47 gunship used with terrifying effect during the Vietnam War under the callsign “Puff the Magic Dragon,” as immortalized in the John Wayne movie The Green Berets. The original Spooky could do plenty of damage with her 7.62mm mini-guns, but Spooky II, aka Spectre, went a step beyond. Actually, leaps and bounds beyond.

The AC-130 is a heavily-armed version of the ubiquitous C-130 Hercules, a member of the exclusive pantheon of U.S. military aircraft that have been in service for over 50 years. First deployed in 1966, it was able to join its older Spooky sister in inflicting havoc upon the Viet Cong (VC) and North Vietnamese Army (NVA) regulars alike. The two gunship systems combined to destroy more than 10,000 enemy trucks and Lord only knows how many enemy troops.

By 1969, most AC-47s were transferred to the South Vietnamese Air Force, which kept using them until the fall of Saigon to Communist forces in 1975. Amazingly, the Colombian Air Force still has some of the old Spookies in service. Meanwhile, Spooky II has continuously stayed on duty with the U.S. Air Force.

The far bigger AC-130 was able to take advantage of her larger size by accommodating much larger guns, such as 20mm Vulcan cannons, 25mm GAU-12 Equalizer cannons, and 40mm Bofors guns. Ever more impressively – and even more distressingly to enemy combatants on the receiving end – starting with the AC-130H variant, the warbird’s arsenal included an M137 105mm howitzer!

This latter weapon is not only highly destructive but also eminently cost-effective. As noted by War Is Boring columnist Joseph Trevithick, “The standard explosive round could blast through up to 10 inches of reinforced concrete, and a specially designed fragmenting shell could shred a target area more than 150 feet in diameter with thousands of metal fragments. Perhaps most important of all — a howitzer is cheap to fire. A $400 artillery round is a tremendous bargain compared to a $100,000 Hellfire.”

Beyond Vietnam: Grenada to GWOT

The first significant post-Vietnam combat usage of the Spectre occurred during Operation Urgent Fury in Grenada in 1983, whereupon their crews provided suppression of enemy air defenses (SEADs) and attacked enemy troop formations. These actions enabled the successful assault of the Point Salines Airfield via airdrop and air land of friendly forces. For these efforts, the AC-130 aircrew earned the Lt. Gen. William H. Tunner Award for the mission.

Recommended: Why China’s Economy Could Collapse

Recommended: Why No F-35 in Top Gun: Maverick?

Recommended: Why Using the F-35 in Top Gun: Maverick Made Sense

From there, it was onto 1989’s Operation Just Cause in Panama, the mission to overthrow Panamanian strongman Manuel Noriega. Herein, these gargantuan gunships destroyed Panamanian Defense Force (PDF) Headquarters and numerous command and control facilities, thus earning not only an additional Tunner Award for their troubles but a Mackay Trophy to boot.

During Operation Desert Storm in 1991, AC-130s provided close air support (CAS) and force protection (air base defense) for ground forces; among Spooky II’s key contributions to this victory was helping to stop a southbound Iraqi armored column during the Battle of Khafji on 29 January 1991.  Tragically, the Spectre crews suffered a combat loss during the campaign when, on 31 January 1991, an AC-130H bearing callsign Sprit 03 was shot down by a lone Iraqi soldier with a Strela-2 MAENADS, killing all 14 crew members aboard.

Since then, Spectre/Spooky II/Ghostrider has continued to provide invaluable service to the nation’s military efforts, from Somalia to the Balkans to the Global War on Terror. And if the aforementioned AC-130J variant is any indication, this devastating behemoth will continue to serve for years to come.