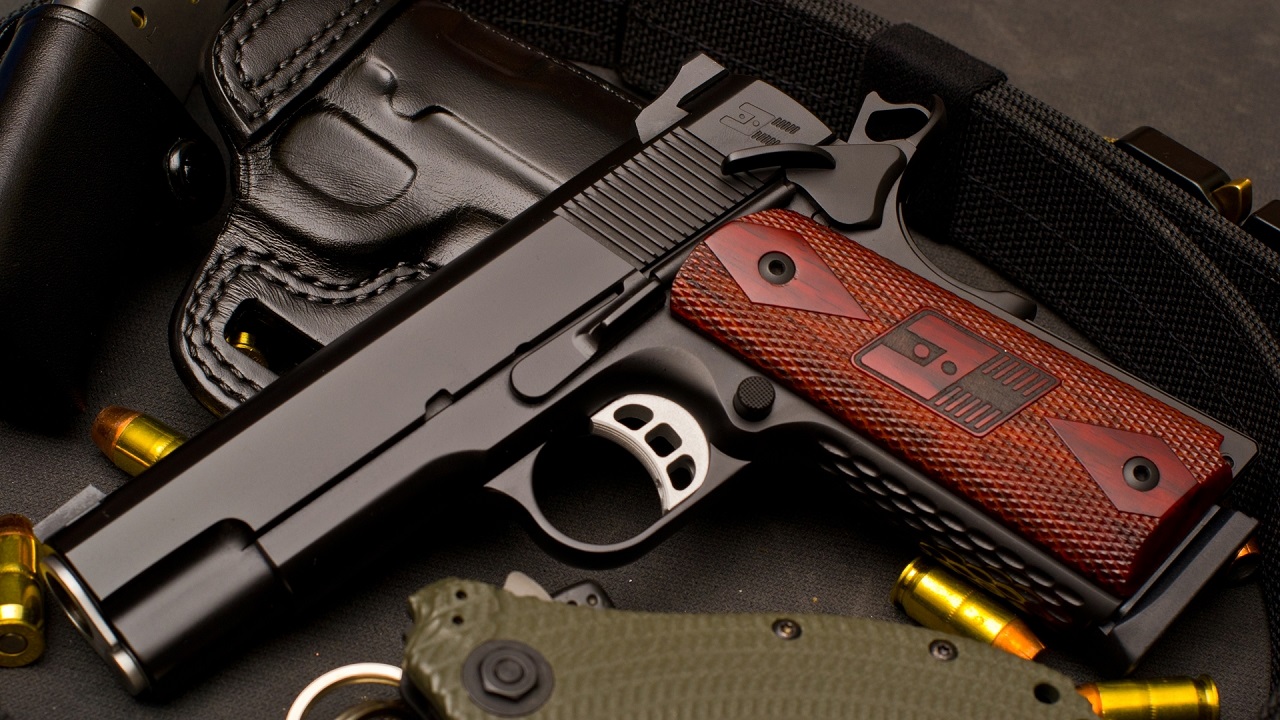 With the increase in gun sales continuing, it is a good time to write multiple “5 Best” handgun articles. Of course, any Top 5 List is going to generate some controversy, and this current topic of 5 Best Guns for Concealed Carry will be no exception. 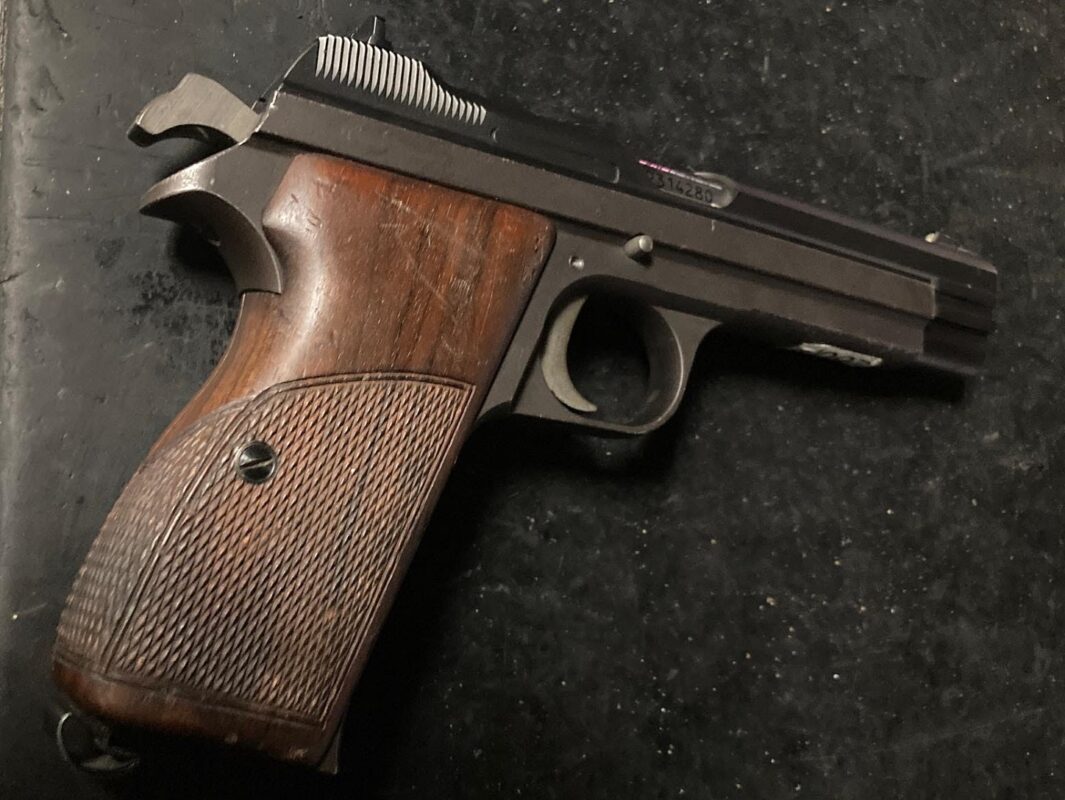 In order to provide some modicum of objectivity in selecting the guns for the final cut, I factor in (1) industry-wide reputation for quality, and (2) personal, hands-on shooting experience so that this writer can vouch for the guns’ accuracy, reliability, handling characteristics, and ease/practicality of concealment.

For those of y’all who’ve read my previous firearms pieces, you probably saw this one coming. The Glock 26 was the first of the “baby Glocks,” i.e. their subcompact Autopistols. It made quite the splash when it debuted in 1995, and rightfully so. In addition to having the top-notch reliability, durability, and simplicity of ergonomics that made the Glock brand so popular in the first place, the G26 is so surprisingly easy to fire accurately and comfortably despite its compact size. The 10 + 1 standard ammo capacity gives you a distinct advantage over a 5- or 6-shot revolver, and the little auto pistol will also accommodate the larger magazines of its older “bigger brothers” (so to speak), the Glock 17 and Glock 19. 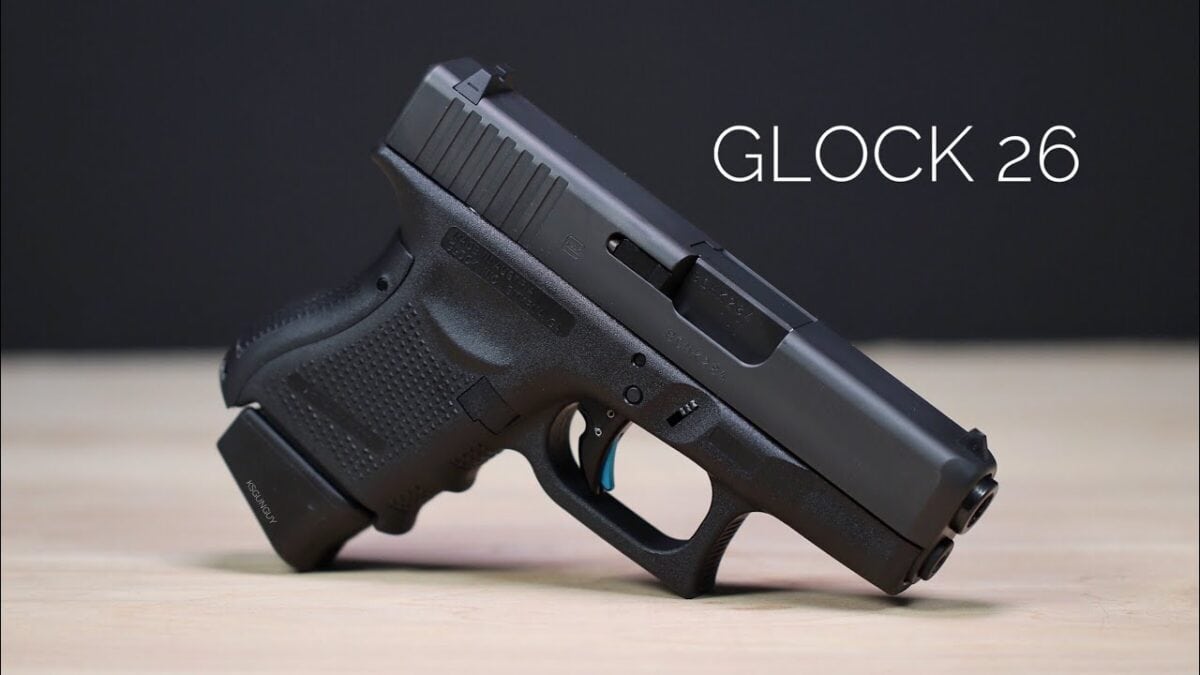 I purchased my Generation 3 (“Gen3) G26 back in 2010 as a backup to the SIG P229 DAK .40 S&W that I was issued as an ICE Special Agent. I’ve long since departed from the Federal law enforcement profession, but 12 years and roughly 10,000 rounds later, this sweet little baby Gock is still in my possession. The G26 splits roughly equal time as my current CCW go-to-piece with the next gun on the list …

The Soviet Union was an Evil Empire, but hey, “give the devil his due,” as the saying goes; the USSR’s armed industry produced some effective weapons, from the AK-47 to the Mosin-Nagant to the current subject at hand, the Pistolet Makarovka (PM). Some critics claim that the Makarov is a mere ripoff of the Walther PPK (which conveniently happens to be the next gun on this list), but that’s a misconception, as I explain in greater detail in the recent article.

The “Mak” uses the 9x18mm cartridge. This was purposely chosen by the pistol’s inventor, Nikolay Fyodorovich Makarov, so as not to be compatible with the 9x19mm NATO “dirty stinking capitalist-imperialist running dog” pistol cartridge. It’s arguably the most powerful caliber you can safely chamber and fire in a direct blowback-operated semiautomatic pistol.

I must confess a sentimental attachment to the PM, as a genuine Russian-made Baikal IJ-70 Makarov was my very first CCW piece (no “Russian collusion jokes, please!), purchased for $200.00 in Florida back in October 2001 as a commissioning present to myself after graduating from U.S. Air Force Officer Training School (OTS). Two years later, I purchased a Bulgarian-made Mak — imported by Century Arms — for an even bigger bargain at $150.00. I eventually traded away the Baikal, but the “Bulgie” remains in my so-called “Orr-senal of Democracy” to this day.

In the past two decades, I’ve been more than favorably impressed by its ease of concealment, robustness, dependability, and practical accuracy. Though not designed as a tack-driving target pistol, the PM has blown me away (bad pun intended) with its ability to nail head shots at 25 yards and center torso shots at 50 yards. I’ve probably fired over 20,000 rounds through the gun. About the only downside — besides the relative availability of ammo compared with Western mainstream handgun calibers — is that it has pretty stout recoil for a sub-caliber pistol and can sting the hand a bit. But hey, them’s the breaks, right?

“Bond. James Bond.” Need I say more? Well, for the benefit of those relatively new to firearms, I suppose I should. Besides being the carry gun of The world’s most famous “secret agent,” the Polizeipistole Kriminal has a time-honored reputation amongst real-life cops, military types, and private citizen gun enthusiasts alike that dates back to 1929 — 33 years before Agent 007 and his pistol made their canonical cinematic debut in Dr. No.

The PPK comes in both .32 ACP (7.65mm) and .380 ACP (9x17mm AKA 9mm Corto AKA 9mm Kurz) options, but if you wanna be true to the James Bond franchise, you’ll purchase the .32 chambering as I did. The .32 ACP may be less powerful than the .380, relatively speaking, but as noted semiauto pistol authority J.B. Wood points out, the former caliber is both more intrinsically accurate and pleasant to shoot than the latter.

The double-action trigger pull can be heavy and grating, but the single-action trigger is decent enough. Earlier models had a reputation for (1) biting the hand that held them and (2) being finicky with jacketed hollowpoint (JHP) ammo, but thanks to later editions like the joint venture between Walther and Smith & Wesson, those latter two problems have been decisively cured. I bought my own “Smith & Walther” (so to speak) PPK back in 2011, and while it’s not my first choice of CCW, it’ll still do its part if I do mine. I’ve probably put somewhere around 2,000 rounds through her.

For you big-bore aficionados out there who want a highly concealable pistol but are leery of any caliber that doesn’t begin with a “.4,” don’t worry, you’re in luck. The fine folks at Glock took their successful baby Glock concept from the aforementioned G26 and married it with the beloved .45 ACP cartridge, and hence the Glock 36 was born.

As I’ve also noted in a separate article on Top 5 Glock pistols, the G36 only holds a 6 + 1 standard capacity, that still beats a 5-shot J-frame Smith & Wesson snubnose revolver, plus it’s a lot more comfortable to shoot and easier to fire accurately than any snubby revolver, along with the benefit of having a flatter profile that doesn’t dig into my hip bone like the cylinders on the little wheelguns have a tendency to do, and faster reloads. 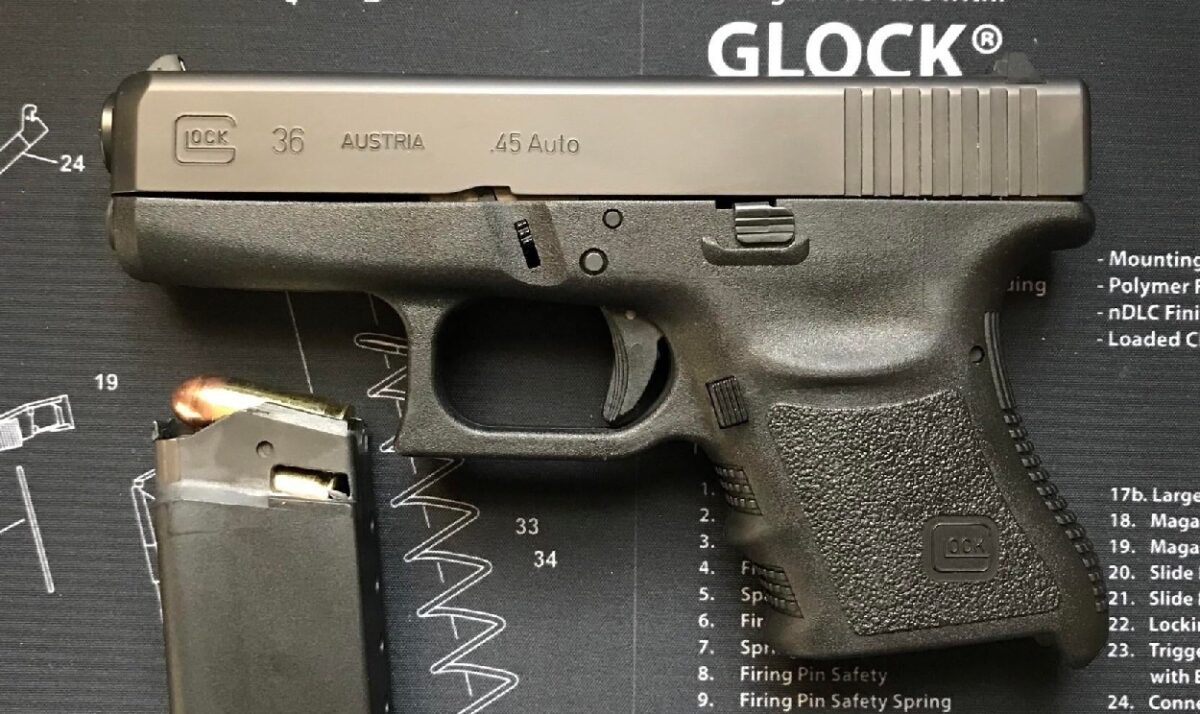 I owned a Gen3 G36 from 2002 to 2005, and though I eventually traded it for the purchase of another firearm, this subcompact .45 never let me down in terms of accuracy or reliability. Estimated round count before I sold her: 4,000 rounds.

Even in the high-tech 21st century, it’s hard to top a revolver for simplicity and ease of maintenance. Some might deride my choice of the Ruger wheelgun over the Smith & Wesson J-frame snubbies, but in the immortal words of Collin Raye, “That’s My Story And I’m Stickin’ To It.”

Yes, I know that snubbies in general are meant to be carried a lot and shot a little, and aren’t intended to be particularly fun to shoot. Nonetheless, I firmly believe that the more comfortable and shootable a carry gun is, the more incentive you’ll have to practice with it regularly, and therefore have a more optimal level of proficiency if and when the moment of truth happens upon you.

Thanks to the heavy steel construction and rubber grip, the SP-101 is far more user-friendly in terms of felt recoil than the Smith snubnoses with miserable stubby wood grips that beat the hell out of your hand. I find the Ruger snubby more comfortable to shoot with full-house Magnum loads than the S&W charged with supposedly kinder, gentler .38 Specials.

What’s more, thanks to that aforementioned heavy steel construction, the Ruger is the Timex of revolvers, i.e. “Takes a Licking and Keeps on Ticking.” Admittedly, that adds a bit more weight to the gun, but it’s a minor and worthwhile tradeoff in my professional opinion. 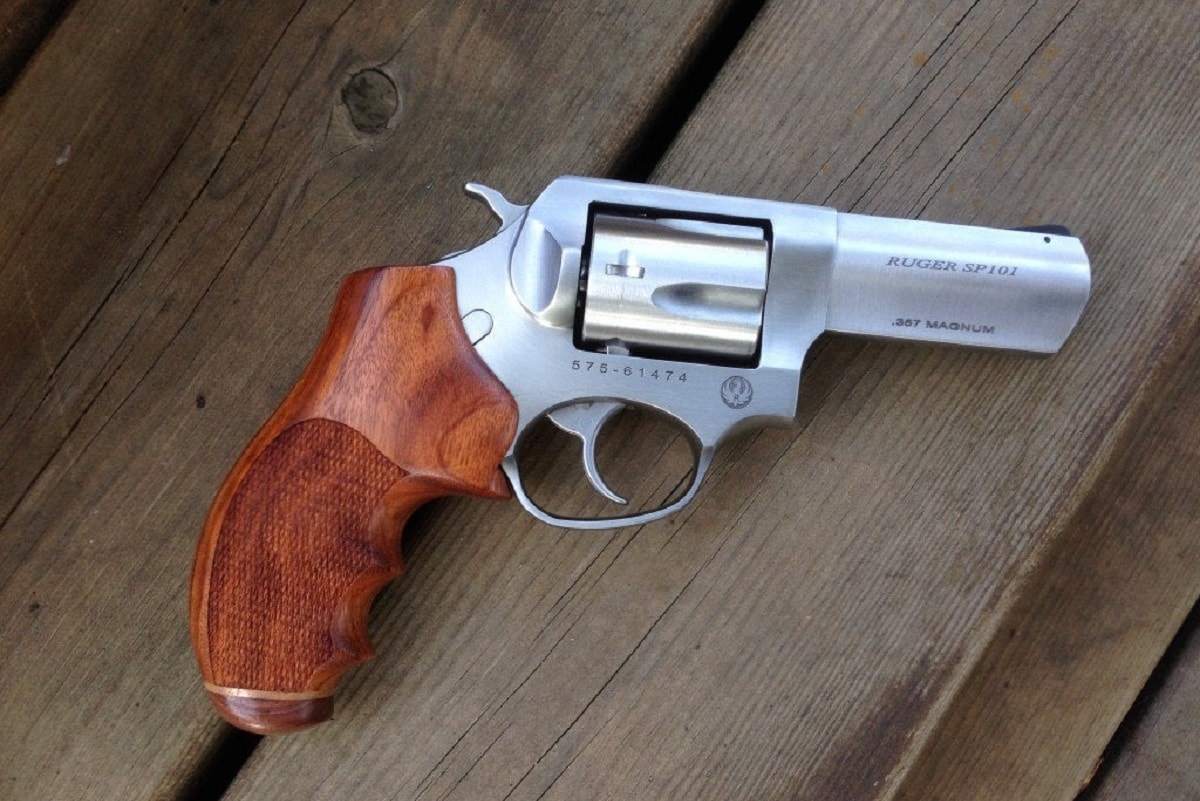 I owned a Ruger SP-101 from 2002 to 2004. As with the G36, I eventually traded it away, but she served me perfectly well for the roughly 3,000 rounds I fired through her, and I certainly wouldn’t mind reacquiring one down the road.

I’ve never fired the Seecamp LWS .32 ACP, so I’m unable to bring myself to include it in my official Top 5 List. But I’ve read and heard so many great things about it — even from old-school big-bore fanatics who typically look down their noses at any so-called “mouse guns” — that I reckon it still deserved at least an Honorable Mention herein. Moreover, since the pistol hasn’t been produced in large numbers, giving it a bit of an aura of the Holy Grail and Unobtainium of hideout pistols. To quote one lucky anonymous friend of mine who did manage to get ahold of one — and actually got a California CCW permit to carry it in that state (sheesh, that is quite an honorable feat) — “It’s a mouse gun that kicks like a mule, and it’s definitely not fun to shoot. However, it’s the best thing ever for concealed carry. I’ve carried it wearing a swimsuit and sarong.”

There are plenty of other fine handguns out there that are more than sufficiently accurate, reliable, and compact for CCW work, including (but certainly not limited to) the Glock 19 9mm and Glock 30 .45 ACP, the Beretta Tomcat .32 ACP, and so forth, but hey, there’s only so much room in a Top 5 list, right?

Happy that your own favorite CCW piece made this list? Miffed as hell because yours didn’t make it? Let us know in the comments section.