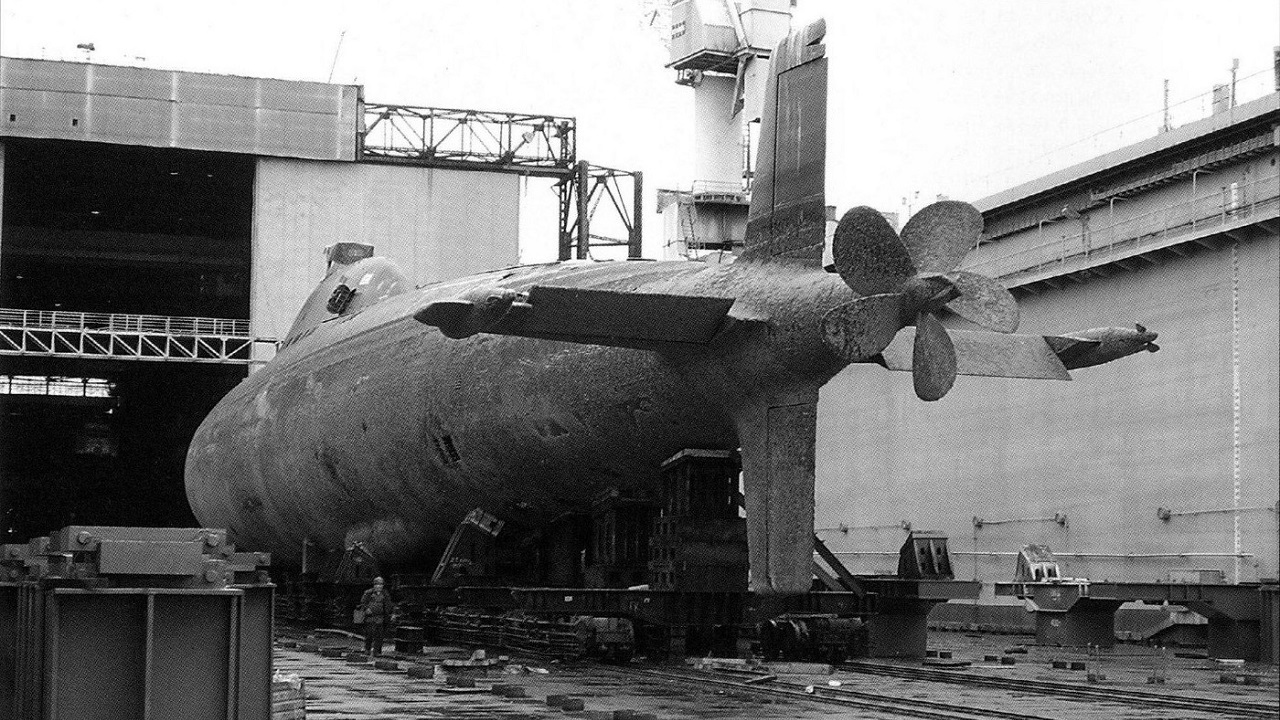 This was the Soviet submarine that was speeding across the Atlantic Ocean to stop Sean Connery in the Hunt For Red October, what they called in the movie and NATO called the Alfa-Class Submarine. But is more commonly called today the Lira-class Submarines was quick, made of titanium but also really loud: Innovations in military technology are often the byproducts of strategic interactions between world powers and their economies. The Project 705 “Lira” nuclear submarine (NATO reporting name “Alfa”) is a great illustration of that dynamic. Indeed, the Lira is both the product and the cause of such an interaction.

In the decades after World War II, the United States leapt out in front of the Soviet Union in submarine technology. The USSR had acquired many of the most advanced German submarine types by the end of the war, but the U.S. had gained invaluable submarine and anti-submarine experience during the Pacific War and the Battle of the Atlantic. This experience, alongside existing technological advantages, gave the United States a strategic advantage in submarine warfare.

More specifically, the Soviet Union’s early nuclear submarines were known to be less stealthy and reliable than Western submarines. Aware of their strategic disadvantage in submarine warfare, and unable to compete in the areas of stealth and reliability, the Soviets sought to innovate.

Lira-Class with a Titanium Will

What Moscow needed was a submarine that could move faster and dive deeper than Western submarines. In order to do this, the Soviets would design the Lira-class. By building a submarine with a titanium hull and unique reactor – both innovations at the time – the Lira would become the fastest, deepest-diving submarine in the ocean, so fast that it could evade Western torpedoes.

Titanium creates surfaces as strong as steel with half the weight, meaning a titanium hull can withstand greater pressure and allow for deeper dives. However, titanium is also three to five times more expensive than steel, and it is an extremely difficult material to work with. Manipulating large titanium panels for hull sections is especially hard. Failures in the welding process, for example, can lead to the titanium becoming embrittled, lowering its strength. Moreover, as was demonstrated in the building of the Lira-class submarines, titanium requires welders to work in hermetically sealed warehouses full of argon gas, adding further expense. Despite these costs and risks, the titanium hull was a necessary component of the Soviet Union’s innovation strategy.

A Cozy Space for a Reactor

Reactors take up space in a submarine. The Lira’s designers sought to minimize this space, thereby reducing the size of the submarine and allowing for higher speeds. The solution in the Lira’s case was to utilize a liquified lead-bismuth mixture to cool the reactors, reducing submarine reactor size, and therefore increasing the submarine’s speed. Such a reactor – as the Soviets later found out – has its difficulties. It requires much automation to work properly, and the engine must be constantly heated so the liquified metal coolant won’t solidify.

But again, as in the case of the titanium hull, the reactor was absolutely necessary to fulfilling Soviet needs. Both were necessary components in the Soviet Union’s attempt to gain either strategic parity or strategic advantage, through innovation, in submarine warfare.

Lira-Class – She Can Dive, Run, and Loiter

The Lira indeed turned out to be rather fast and able to dive quite deep. It was, in fact, the fastest and deepest-diving submarine ever produced, able to cruise at 41 knots when submerged and dive as deep as 1,148 feet. Its speed allowed it to outrun NATO torpedoes, and its depth kept it out of range of other anti-submarine weapons. Theoretically, the Lira could even loiter beneath a NATO submarine and shoot torpedoes overhead.

Needless to say, the prospect of the Lira prowling the seas upset the existing strategic balance between NATO forces and the USSR, to the latter’s benefit. Upon learning of the Lira’s capabilities, the U.S. and British navies rushed to build weapons that could target the submarine. The American Mark 48 ADCAP torpedo was said to travel at 63 knots. The British developed a similar torpedo named “Spearfish.” The U.S. also pursued the “Sea Lance” supersonic missile program, which would deliver a torpedo or nuclear depth charge at ranges of up to 100 miles.

What is now well known is that the Soviet Union ended up producing only seven Project 705 Lira submarines; that some of them did, in fact, experience cracking in the hull; and that making repairs proved difficult, as the aforementioned coolant in the reactors had to stay heated at all times to remain liquified.

The submarine also turned out to be especially noisy, so the vessel was easy to detect. Most of the Lira were decommissioned and scrapped in the early 1990s at the tail end of the Cold War. They were too expensive to maintain.

Yet what the Lira proves is that innovation in military technology is often part of an ongoing competitive process to maintain strategic advantage in discrete areas. The Lira was both the outcome (as a response to U.S. naval dominance) and cause (Western developments in anti-submarine weaponry) of such a process, regardless of its ultimate use or lifespan.