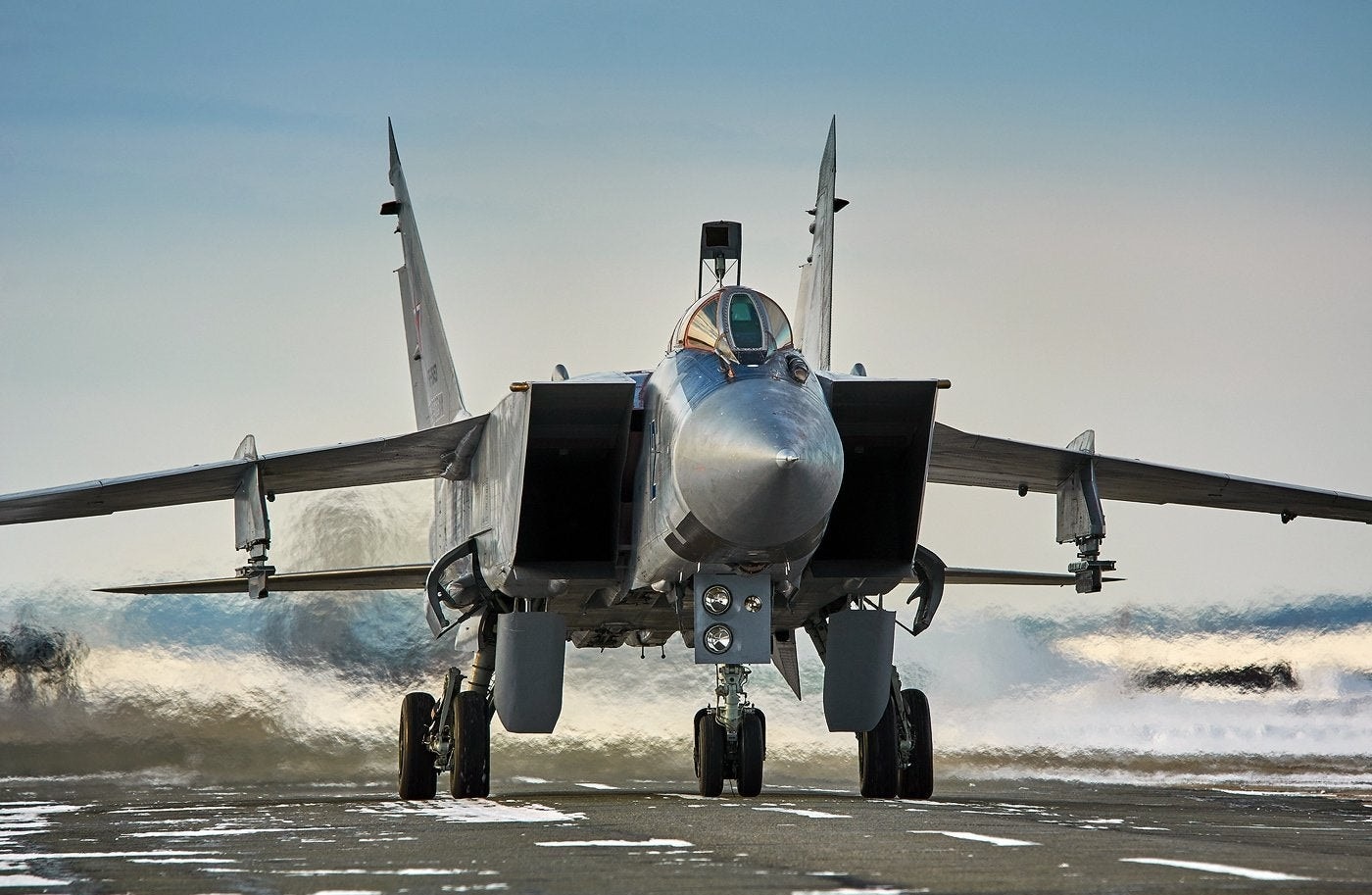 The MiG-31 is certainly no stealth fighter, that much is clear. However, this Russian plane is very, very fast and will surely serve in Moscow’s air force for a long time. This plane has even played a role in the war in Ukraine:  With so much interest surrounding today’s fifth-generation fighter jets, it might be easy to miss the Russian-made MiG-31 “Foxhound.” Its lack of full stealth features makes this defense interceptor easy to overlook, but make no mistake – the Foxhound is a seriously impressive aircraft. It will probably continue to play a role in the Russian air force for years to come.

A Range of Capabilities

The Mig-31 was designed off the MiG-25 “Foxbat” interceptor, but any resemblance is mostly cosmetic. Outfitted with two D-30F6 engines, the two-seater MiG-31 can reach an impressive maximum speed of Mach-3 and an altitude between 65,000 and 67,500 feet. It has an excellent range of 1,900 miles upon takeoff and 3,400 miles with one aerial refueling. The jet is all-weather. It can operate at day or at night, and it can network with other planes in its sortie to share information in real-time. Additionally, the Foxhound entered service as the first Soviet fighter to have genuine look-down/shoot-down capabilities, thanks to its phased array radar. It was also the first fighter of its kind to sustain a cruise at supersonic speeds.

Its weapons capabilities include a standard Gsh-6-23, 23mm cannon, as well as the ability to employ R-37 long-range air-to-air missiles and R-77 short-range missiles. Active radar guidance on these munitions provides engagement ranges of up to 400 km to the former and 110 km to the latter, with the R-37 carrying a large 61-kg warhead. The Zaslon-M radar helps the Foxhound fire at such ranges, detecting large and medium aircraft more than 400 kilometers away.

The Foxhound’s MiG-K variant was recently outfitted with the Kh-47M2 “Kinzhal” hypersonic tactical ballistic missile. This munition can reliably reach any number of ground and surface targets, staying accurate at ranges up to 2,000 kilometers and traveling at Mach-10 speeds.

The MiG-31 Is an All-Russian Aircraft

True to Russia’s habit of upgrading older airframes rather than developing new craft, the MiG-31 was upgraded to the MiG-31B variant long ago. An uncertain number of aircraft in the Russian fleet have been upgraded to either MiG-31BM or MiG-31BSM status. These upgrades have added important technologies, including the aforementioned network-centric combat control, phased array radar, and possibly the ability to load hypersonic missiles.

Exports of the MiG-31 remain nonexistent. Syria contracted to purchase a small amount of the aircraft but was pressured by various entities to back out of the deal. Nonetheless, there are reports that the Syrian government may be operating MiG-31s.

The craft has also seen combat experience in Ukraine. Though details are limited, the Ukrainian military claims it has downed two of the craft, making this high-flying interceptor seem more vulnerable than it was in the past. Indeed, until now it has been unclear just how great the MiG-31’s capabilities really are.

But Russia appears to have no plans to move on from this interceptor anytime soon. Reports suggest a revamped version of the MiG-31, the MiG-41, will feature superior performance across all indicators. It would reportedly fly at speeds exceeding Mach-5, reach higher altitudes, and carry more capable weapons (such as directed energy weapons and new classes of anti-satellite weaponry). It would also integrate artificial intelligence and newer hypersonic weapons.

If the MiG-31 wasn’t beastly enough, the forthcoming MiG-41 certainly will be.